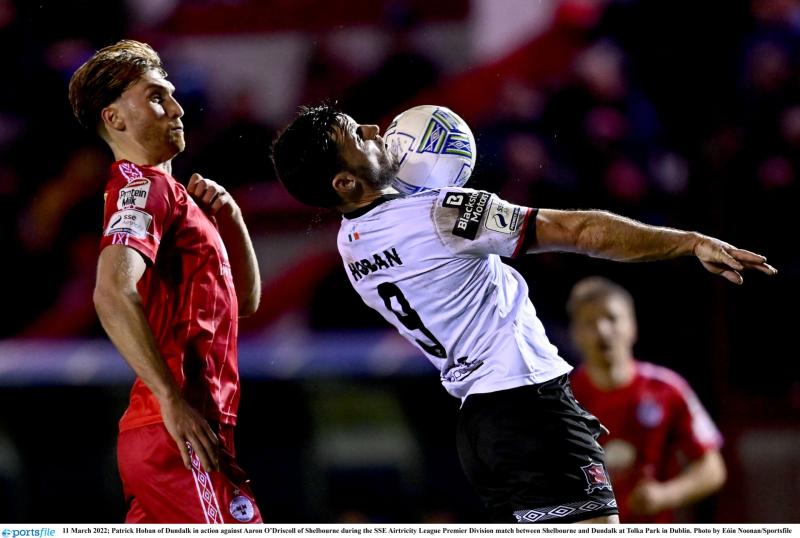 Dundalk FC were held to a 1-1 draw by Shelbourne at Tolka Park tonight in the SSE Airtricity League.

The Lilywhites thought they were going joint-top of the table after Patrick Hoban had headed them in front after 69 minutes, but Stephen O’Donnell’s side were cruelly denied by an 86th-minute penalty from Sean Boyd.

O’Donnell made three changes from the team that played out a scoreless draw at Sligo Rovers the previous week, as John Martin and Keith Ward both came into the team, while Mark Hanratty – playing at left-full – was handed a first ever league start.

The opening 20 minutes was largely uneventful, with Hoban’s volley on the edge of the area – following some good Dundalk pressure – the only notable piece of action.

It started to open up after that, and a Sam Bone piledriver from outside the box had to be pushed away by Shelbourne goalkeeper Lewis Webb, as Dundalk looked the more likely.

Shels created some opportunities of their own in the first half, though, with John Ross Wilson volleying off target after Dundalk only half-cleared a Brian McManus set-piece.

Wilson again was in the thick of the action minutes later when he met a Kameron Ledwidge cross from the left at the back post, but the Shels right-back turned over.

The evergreen Keith Ward was enjoying himself on the damp Tolka surface, and his audacious overhead-kick attempt was gathered by Webb after 64 minutes of play.

Five minutes later, Ward’s delightful set-piece delivery from the left was guided into the bottom corner by the head of Hoban right in front of the strong travelling support.

However, Shels were given a chance to equalise from the penalty spot just four minutes from time when Nathan Shepperd collided inside the box with Boyd, who subsequently dispatched after Derek Tomney had penalised and booked the Welsh U21 goalkeeper.

Trip Through Time: Memories of Louth Civil Defence during the Cuban Missile Crisis