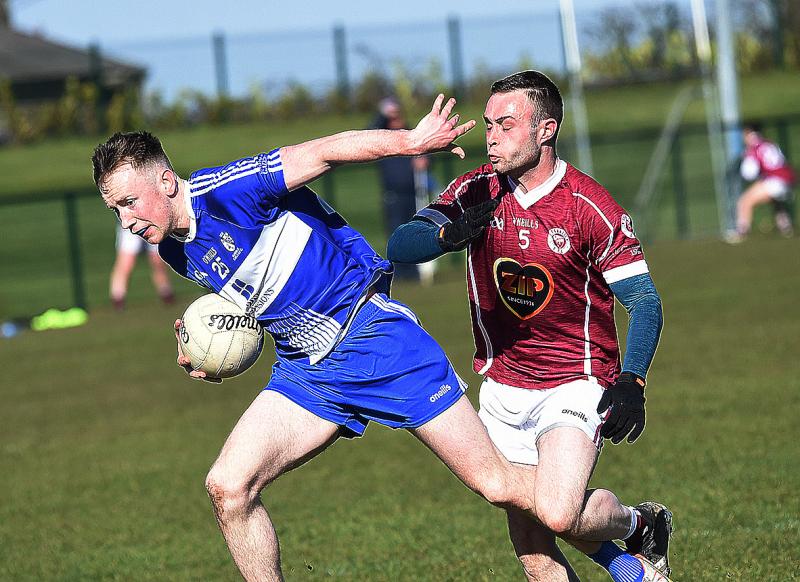 Cathal O’Hanlon's first home game in charge of Dundalk Gaels resulted in a big victory over O’Connell’s in the second round of the Sheelan Cup.

Jackie Agnew's goal early in the game seemed to spark the hosts into life and the Gaels came from behind to claim victory thanks to the impressive Ryan Coleman and veteran Sean McCann.

With Gaels in control after the major, they led 0-9 to 1-2 at half time. After the break, the Castlebellingham men scored a point. A well worked Adrian Rafferty kick out found Jordan Keating who claimed the mark.

Keating played a pass to McCann who in turn picked out the run of Oisin Murray who flicked the ball to full forward Tomas Kavanagh who was fouled for a penalty. McCann made no mistake from the resulting penalty to seal the game as his side also added seven second half points.

Naomh Mairtin overcame the concession of an early goal before turning in a strong second half performance to ensure they made a winning start to their Paddy Sheelan Cup Group H campaign last Saturday night.

Paul Crewe scored the only goal of the game for the hosts in the early opening exchanges to help his side take a 1-2 to 0-4 lead into the break.

However, the County Champions raised their game in the second half and despite the youthful line-up they went on to secure a five-point victory with the help of scores from Dara McDonnell, Jack Lynch and Thomas Clarke.

Geraldines chalked up their second win of the Paddy Sheelan Group G campaign as they came from behind at the break to defeat St Patricks at Haggardstown on Sunday afternoon.

In a low-scoring first half, it was the visitors who scored the first goal of the game through Jason Woods as they went in at the break with a 1-1 to 0-3 lead. The Gers upped the pace after the restart and a Josh Arrowsmith’s goal put them in command.

The Pats had Rory Duffy and Conor Grogan dismissed in the second and despite a goal from Eoin O’Connor they were unable to rescue anything from the game.

Dreadnots proved too strong for Kilkerley Emmets on Sunday morning as they made a winning start to their Paddy Sheelan Cup Group C campaign at Clogherhead on Sunday.

Conal McEnaney and Daniel McKeown opened for the Emmets and Craig Shevlin hit two for the home side with Kieran Murtagh pointing in reply.

Dreadnots hit six on the bounce from Craig Shevlin (4), Hyland, and Peter Kirwan while Conal McEnaney pointed his second free of the half to cut the gap to 0-8 to 0-4 at the break.

Although McEnaney added two points in second half, Dreadnots remained on top as Peter Kirwan and Craig Shevlin shared 0-3 to make it 0-11 to 0-6 at the long whistle.

Cooley Kickhams good form continued as they comprehensively beat Sean O'Mahonys at Fr McEvoy Park in Cooley on Sunday morning to qualify for the quarter finals of the Paddy Sheelan Cup.

In a sterling opening half, all of the Kickhams full forward line got on the scoresheet. Points from Fearghal Malone, Patrick Johnston and Michael Rafferty had the peninsula men 0-8 to 0-3 in front at half time.

O'Mahony's could not find a way through and landed three points in both halves. Stephen Kilcoyne impressed off the bench for the Dundalk men but top scorer on the day Rafferty, put Cooley in the next round with the only goal of the game.

A blistering start to the 2022 season saw Ardee St. Mary’s run up a big lead that home side St. Kevin’s could not comeback from. The Philipstown men did go close however with an excellent second-half performance.

Goals from half forward duo Ronan Carroll and Kian Moran had Ardee 2-2 to 0-1 up after 18 minutes of action. It was double scores at the break with St Kevin’s trailing 1-3 to 2-6 after Lee Crosbie found the net for the hosts from the spot.

Sparked by an early Brian Callaghan goal, the tide completely changed upon the resumption in favour of the hosts. TJ Doheny in fact levelled with a low drive, but Ardee looked to another veteran, Darren Clarke to guide them over the line.

Goals win games, Hunterstown Rovers proved that adage once again with a convincing win over Naomh Fionnbarra at John Markey Park in their first outing of the season.

Finbarrs made the better start to the game with the first three points but Hunterstown landed their first goal of the game through Colm Murphy to make it 1-5 to 0-4 in Colm Donnelly's sides favour.

The second half began with Jamie Ward finding the net and ended with debutant Aaron Levins scoring two that would send Rovers home with a big opening day victory.

St Fechins are up and running for the new season after a brilliant second half display saw them brush aside the challenge of the Oliver Plunketts at Beaulieu on Sunday.

This Group D encounter was evenly balanced in a competitive opening half. Ryan Walsh and Harry Haughney had the hosts in front in the early stages but the Plunketts fought back and a Killian Nolan goal had the Drogheda men leading by 1-4 to 0-6.

The game turned in the opening minutes of the second half when a goal from a Ryan Walsh penalty was followed by a Mickey McMahon goal. There was no way back for the Plunketts after that as the dominant young Fechins side added a further 15 points to their tally.