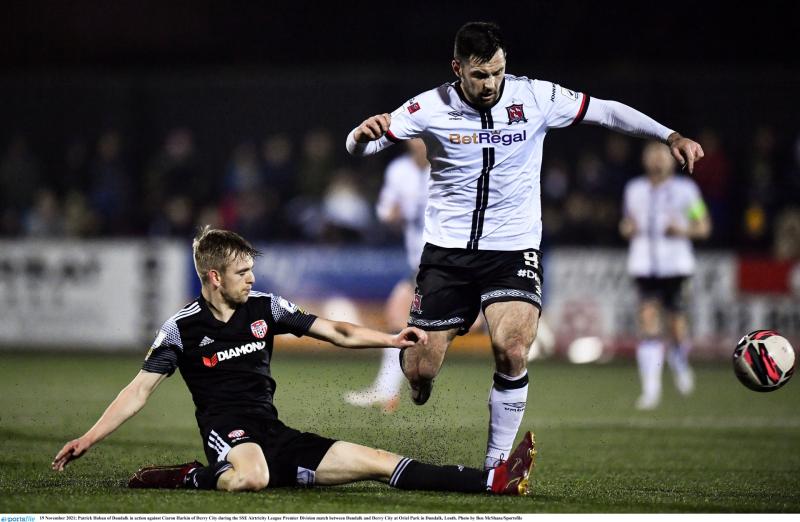 Anticipation is building up nicely as the SSE Airtricity League returns tonight. New owners, a new manager and a plethora of young and established talent coming through the doors at Oriel Park has left Dundalk fans buzzing for what may lay ahead in 2022. And what a way to get things underway.

Derry City head to Oriel tonight and with so many former Lilywhites favorites set to feature for the Candystripes it is sure to be feisty encounter. Nobody wants to start the league on the backfoot.

Looking forward to tonight's match, the Democrat looks back on all four meetings between the two sides last year.

Dundalk FC were denied what would have been a deserved three points at the Ryan McBride Brandywell Stadium, as they played out a 1-1 draw.

David McMillan gave Dundalk the lead in the second half before another Alessio Abibi error allowed Cameron McJannet to equalise for a result which at time did little to help the fortunes of two teams fighting it out at the bottom of the the table.

The visitors took the lead on 53 minutes when Daniel Cleary’s long pass from defence found its way to Duffy and he squared it for substitute McMillan, who finished from close range.

The Lilywhites really should have doubled their lead minutes after that when Stanton found himself through on goal, but Derry custodian Nathan Gartside brilliantly denied the Scotsman.

Magilton’s team were coasting at that stage and were looking likely to extend their lead, but a third catastrophe in five games for Albanian stopper Abibi afforded Derry a leveller.

A free was whipped in just past the hour-mark and was headed across goal by Ronan Boyce before being headed home by McJannet after Abibi had failed to collect an easy ball. That meant the points were shared.

Chris Shields signs off Dundalk career with a win

An elated Vinny Perth celebrated a second win on the bounce as Dundalk FC head coach, as his side defeated Derry City 2-1 to move up to sixth in the SSE Airtricity League.

Playing for the 349th and final time for Dundalk was Chris Shields, who captained the side before setting off to finalise his transfer to Irish League champions Linfield.

Nathan Gartside was kept very busy throughout the contest and made superb saves to deny Pat Hoban, Sean Murray and Michael Duffy. However the hosts took a deserved lead on 37 minutes when Duffy’s drilled shot was palmed by Gartside, but only into the path of Kelly, who finished with relative ease.

Dundalk may have been the dominant side in the opening 45, but they were reminded just how precarious a 1-0 lead is shortly after the restart when Thomson’s cross was met at the back post by Daniel Lafferty, but the Derry full-back turned his effort off target.

Duffy forced another save out of Gartside, but from the resulting corner, substitute Darren Cole handled in the box from a Raivis Jurkovskis overhead-kick attempt, as Dundalk were awarded a 58th-minute penalty by referee Robert Harvey.

And, up stepped Hoban, who dispatched confidently into the bottom right-hand corner – despite Gartside guessing correctly – to give The Lilywhites a two-goal cushion.

The Candystripes pulled one back just two minutes later, however, when skipper Toal powered home a header from Thomson’s corner to put Derry back into the contest. They turned the screw from here, forcing multiple chances but Dundalk hung on to send captain Chris Shields off with a win.

Dundalk FC suffered defeat at the Ryan McBride Brandywell for the first time since 2012 after Derry City recorded a 1-0 win.

Jamie McGonigle’s penalty on 51 minutes proved to be the decisive goal, as the Lilywhites suffered a defeat that left them at the time only two points above the relegation play-off position.

Starting for Dundalk was Patrick McEleney – who is set to join Derry at the end of the season – and his attempt from distance veered well off target after 25 minutes of play.

Five minutes later, the Derry native had to go off injured following a reckless challenge by Daniel Lafferty, while Daniel Kelly also picked up a knock before leaving the pitch.

Between those substitutions, Lafferty curled a free-kick from a dangerous position up and over the Dundalk wall, but it sailed well off target with Abibi very much untroubled.

After a Sam Stanton delivery wasn’t cleared by Boyce, David McMillan’s acrobatic attempt had to be kept out by Nathan Gartside; seconds before the Dundalk forward stung the hands of the Derry goalkeeper with a powerful shot as the half drew to a close.

Derry took the lead on 51 minutes from the penalty spot after Andy Boyle handled in the box after being put under pressure by McGonigle, who then dispatched to make it 1-0.

Dundalk, visibly tired after their European exploits the previous Thursday, tried to find an equaliser, but Cameron Dummigan’s shot from distance was miles off the target.

Dundalk finished the game with ten players after McMillan was stretchered off with five minutes of normal time remaining and they never looked like finding a leveller after that.

A forgettable season ended in defeat for Dundalk FC as they were beaten 2-1 by Derry City, who recorded what was their first win at Oriel Park since 2013.

Sean Murray’s first-half opener was cancelled out by goals from Ciaron Harkin and Jamie McGonigle for Derry, who by finishing fourth, will qualify for next season’s Europa Conference League – if St Patrick’s Athletic beat Bohemians in the FAI Cup final.

The outcome on Friday was all but academic for sixth-place Dundalk, but Perth’s side started brightly and created the better opportunities throughout the opening 45 minutes.

David McMillan’s shot was blocked out by Cameron McJannett before Darren Cole got in the way of Patrick Hoban’s subsequent attempt, with Murray volleying over as a result.

Sami Ben Amar then had a penalty appeal waved away; not long before Murray’s incisive pass put Hoban through on goal, but he was brilliantly denied by Cole’s last-ditch tackle.

The Lilywhites opened the scoring on 34 minutes when Murray dispossessed Harkin and got the better of Cole before firing a shot past the Derry goalkeeper from outside the box.

Despite a lack of goalscoring opportunities in the first half, The Candystripes equalised right on the stroke of half-time, as Harkin – after collecting a Joe Thomson pass – was given the freedom of Oriel before unleashing a shot from distance which flew home beyond Cherrie; via a wicked deflection off Dundalk’s player of the year, Andy Boyle.

Derry did take the lead seven minutes after the restart, and it was Will Fitzgerald who provided the assist for McGonigle as he slotted home into the bottom corner, despite the entire Dundalk back-four appealing to the officials for an offside flag that never arrived.

Hoban, Dan Cleary and Sean Murray all came close for Dundalk, but overall their attack fizzled out as the first game under the new ownership ended in defeat.