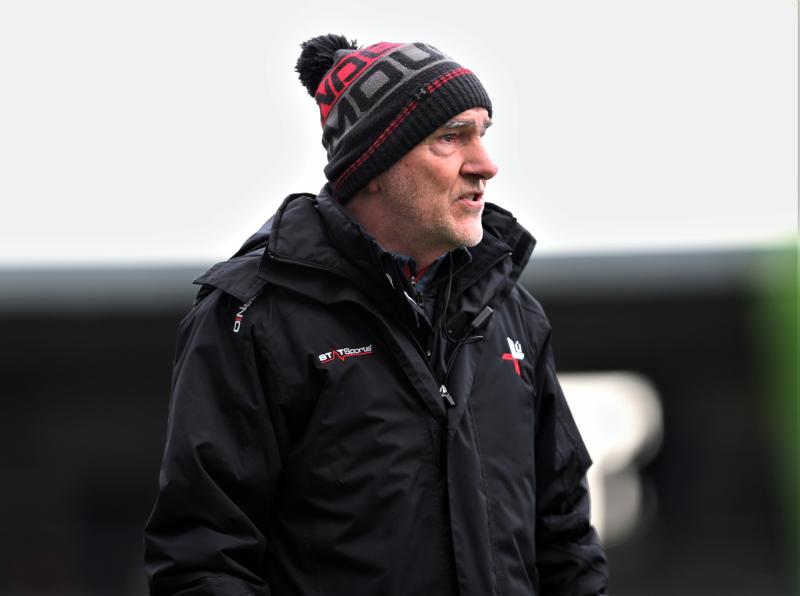 Mickey Harte on the sidelines in Longford. (Pic; Syl Healy)

Who said following the Louth Footballers was going to be easy? After so many highs in 2021 with the introduction of Mickey Harte to the Wee County, the new year has brought ambitions down a peg a two with Louth yet to pick up a victory in either the O’Byrne Cup or the National League.

Last Sunday, the Tyrone native sent his troops into battle to face Longford for the second time this year. After a good first half showing against the breeze, Louth hoped to push on for a vital win in a tie described pre match as “four-pointer”. In the end they had to settle for a draw.

“We were happy with the first half as we didn’t need to be very progressive, pushing on and taking chances as our game was to contain them in the first half” explained Harte as he spoke to the media following the draw.

“We did that while actually going ahead and I felt we were very happy with how we performed in the first half. Yet we felt we should have been able to push more in the second half and that is not the way it happened.

“It became a bit of a dogfight and I’m sure they’ll be kicking themselves that they didn’t get the two points as they had a really good chance to go two up with no time left.

“It is small margins here, fine margins and that one point I believe will be so significant come the end of the season. Even though we dearly needed two I’ll happily take that one off you.”

While Harte knows that fans will be disappointed that they didn’t push on for the win, the former All Ireland winner does feel his side is going in the right direction.

Having to fight so hard to earn the draw is a characteristic of the Wee County’s game that impresses him, with matches like this just what they need to continue their upward curve following a successful 2021.

“That is really knife edge football. You are down a point going into added time when everything counts. Every touch of the ball, every pass, every movement that you make is critical and we had to keep fighting to the bitter end.

“They had possession coming up the field and we actually won it back, James Califf was out about 60 yards from his goal line but he had the presence to be in the place where the ball is likely to break.

“He took it while he was on the ground, got a handpass off which was a wonderful piece of play, then to convert following that was great. If Ciaran hadn’t been fouled, he was going on for at least a point, so I think it shows a lot about the building of character in this team.

“That is stage one of a programme of work that needs to be done, as if you haven’t got character it doesn’t matter what skills you have. I believe there is good skill in this team, but they need that character building process to be able to avail of the skill sets that they have.”

It doesn’t get any easier for Louth, their next game being a trip to high flying Limerick at the Gaelic Grounds next Sunday. Harte feels his side are still getting used to the jump in quality From Division Four to Three but that they are improving with every game they play.

Having been forced into seven changes versus Longford, the short break gives his backroom staff a chance to get more players off the recovery tables and back on the pitch.

Harte knows the importance of this tie with the Treaty men but stressed as usual they were not panicking and would continue to take each game in the league as it comes.

“We hope to get some more lads back fit and it give us also another opportunity to get those players who missed quite a good bit of pre-season training two more week under their belts” added Harte.

“Looking at Limerick and how they played against Longford, they looked pretty sharp. They went up to Antrim and beat them in their own back yard so it doesn’t get any easier, but we can’t throw our hands up in the air and say this is an impossible task.

“We have got to take each game one at a time, prepare the best we can and see where that takes us.”