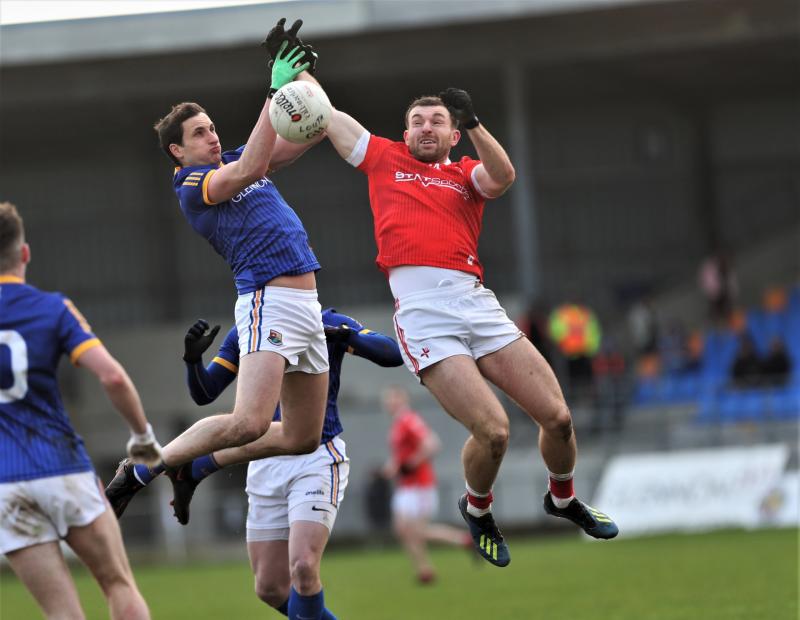 Louth are still searching for their first win in the current National Football League campaign but did get themselves off the mark by snatching a last gasp draw in this Division Three clash at Glennon Brothers Pearse Park on Sunday.

The Home side looked like they had things under control in a clash described as a “four pointer” by Mickey Harte in the lead up to the match, but despite leading at half time come the final moments it looked as though Longford were the ones who would leave with the points.

However, they luckily let victory slip from their grasp as The Wee County showed their mettle and levelled matters from a pressure free converted by captain Sam Mulroy with the last kick of the game.

Played in extremely difficult wet and windy conditions, Longford looked to have done enough to come out on top in this very scrappy battle, which became a real war of attrition, when Dessie Reynolds kicked the lead score in the 67th minute but Louth were awarded a free deep into stoppage time.

A black card foul from Daniel Reynolds gave The Naomh Mairtin clubman the opportunity to convert a difficult kick in the seventh minute of stoppage time and the sharpshooter slotted the ball over the bar to quieten the small, largely Longford crowd who braved the bad weather.

Five additional minutes went up on the board, but Monaghan referee Niall McKenna continued to play on and then blew the final whistle immediately after Mulroy had landed the free to earn a valuable draw for the Men in Red.

The visitors led by 1-3 to 0-4 at half-time with who else but Mulroy scoring a well-taken goal in the 7th minute, before Jason Matthews registered Longford’s opening point moments later.

Defenders Iarla O’Sullivan and Patrick Fox were also on target with the other point for Longford in the first half coming from a Darren Gallagher free.

While they produced an improved performance on the changeover to outscore Louth 0-5 to 0-3 despite now being against the elements, the late, late drama left the game in a stalemate. A positive result for both teams, but not really what either team wanted or needed in what looks a cutthroat division.

Next up is a meeting with the high-flying Limerick at the LIT Gaelic Grounds in in a couple of weeks (Sunday February 20) and relegation will be a serious threat should the Wee County lose against the Munster men who have beaten Longford and Antrim in their first two fixtures.

It must be said that several decisions made by the whistle happy match official were dubious, to say the least, and his general poor handling of the game against Louth left a lot to be desired.

After a tedious start with Longford opting to defend deeply in dealing with the difficult crosswind, the deadlock was eventually broken with seven minutes gone on the clock.

A rare mistake by Darren Gallagher saw him lose the ball and in an immediate Louth counter-attack a pass from Liam Jackson put Sam Mulroy through for a fine goal as he slotted the ball past the opposing keeper Paddy Collum.

A minute later Billy O’Loughlin’s troops got their first score when Jayson Matthews shot over the bar and a second point quickly followed from wing back Iarla O’Sullivan before another defender Patrick Fox surged forward to get his name on the scoresheet in what was a mini purple patch for the home side.

It was a cracking point from the corner-back as the ball clipped the upright and while the sides were now all square, Louth went back in front with a little help from St Mochtas Casey Byrne. The former AFL star bagged a brace of scores - the second in the 21st minute.

Newcomer for the hosts Keelin McGann won a fair amount of possession for Longford during the course of the game and he was fouled for a few frees, one of which was converted by Darren Gallagher in the 30th minute to leave just the minimum of margins separating the sides, 1-2 to 0-4.

Louth had the last say in the first half when Sam Mulroy fired over a free and five minutes were gone in the second half when Jayson Matthews was on the mark again from a close range placed ball.

Back came Louth with a brilliant point from Ciaran Downey but with Michael Quinn now making a big impact through a few penetrating runs from the centre-half-back position, Louth were struggling to keep the Longford attack at bay, resulting in a dominant spell that yielded three points in a row.

After Darren Gallagher converted another free in the 43rd minute, the equaliser materialised moments later when wing back James Moran found himself in a good position to shoot over the bar.

Following a bad wide by Louth substitute Daire McConnon, the upright denied Dessie Reynolds a point before Longford went ahead for the first time when Gallagher slotted over a free in the 60th minute.

Soon after Louth were level thanks to a glorious strike from Sam Mulroy (play) but Dessie Reynolds regained the lead for Longford when he landed a fine point after receiving a pass from substitute Ross McNerney in the closing stages of the match.

The soon to be hero Sam Mulroy actually missed a vital free in stoppage time and the same thing happened to McNerney who shot wide before the Louth saviour landed a terrific point to snatch a share of the spoils in this dour encounter.

It leaves both sides in precarious position as a point in the grand scheme of things was of little use to either side. After two games without a win, in which they were in front at the break in both, Harte will know he has plenty to work on during the next two weeks.

Louth need to start winning and fast if they are to avoid the drop back down to Division Four, but is an away day, against a Limerick side that is beginning to build up a nice run of momentum, the place to reignite their league season?

A huge ask but it would really show what they are made of if they came out with a positive result. Meanwhile a tough loss, as Longford suffered at the venue already, and there could be scars left in the camp that may prove detrimental to Leinster or Tailteann Cup ambitions later this year.