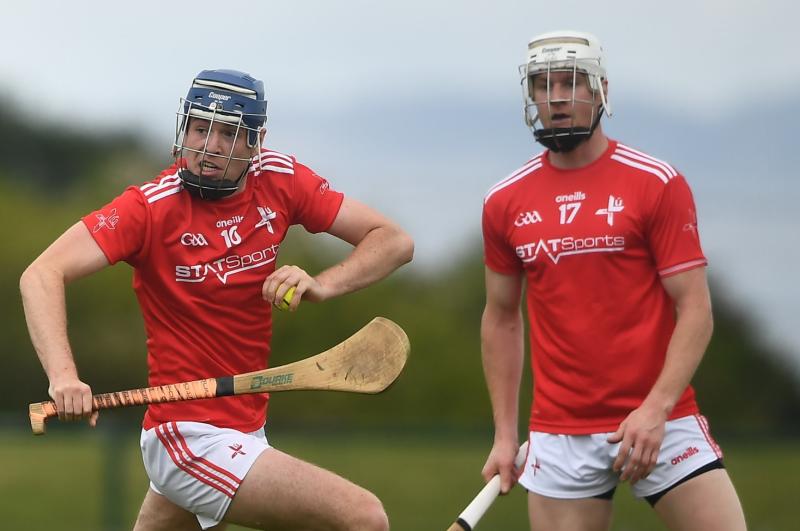 The after-match sentiments of Louth manager Paul McCormack perfectly summed up this heart-breaking defeat for his side at the Athletic Grounds last Saturday afternoon.

“I'm just really disappointed for the men in that dressing room that really did everything that they could for the Louth jersey today. A draw, at the very least, was what we deserved” he exclaimed when speaking to the Democrat post-match.

Armagh went into this match as favourites based on recent results between the teams, but manager Padraig O Connor, who was banished to the stand following a red card from the referee after just six minutes, will admit that his side were lucky to escape with the win on the day.

After Darren Geoghegan had opened the scoring for the visitors with an early pointed free it is relevant to mention that his side never trailed in this match until the last five minutes of an exciting encounter.

Midfielder Odhran Curry replied from play for the Orchard County, who were wearing a new all black kit for the first time. A foul on Niall Keenan saw Geoghegan restore his side’s lead from the resulting 20 metre free on five minutes.

The Kilkerley man doubled the lead with his third successive free before Paul Matthews saw his goal bound effort from close range just clear the crossbar on 11 minutes.

The sides exchanged the next two points with Conor Deane's effort for the visitors exquisitely struck over direct from a sideline cut on the right wing. The same player then grabbed the game’s opening goal on 18 minutes when finding the top right-hand corner of the net, 1-5 to 0-2.

Dean Gaffney responded with a quick brace of pointed frees before Geoghegan grabbed his first point from play, adding to it on 26 minutes with another free.

Armagh had the better of the exchanges in the time that remained to the break, accounting for good points from the sticks of Fionntan Donnelly, Paddy McBride and Dean Gaffney.

In the time added on, Geoghegan set up his Naomh Moninne colleague Feidhelm Joyce for a good score as he fired over from just outside the 20-metre line, leaving their side in front by 1-8 to 0-7 at the turnover.

Louth could not have asked for a better start to the second half as substitute Andrew Mackin set up Paul Matthews for a cracking second goal after just 30 seconds.

Two minutes later Armagh struck for a goal of their own when substitute Eoin McGuinness kicked home from close range as Louth failed to clear their lines. Free takers Gaffney and Geoghegan then exchanged scores from 20 metre frees.

Dean Gaffney added to his increasing tally with another brace of points as the game entered the last quarter with Louth holding a narrow two points lead.

On 55 minutes Jamie McDonnell found Geoghegan from a defence clearing free and he fired over his second point from open play from the right of the post.

A further brace of pointed frees from Gaffney cut the Wee County's lead to one but Armagh then had to thank their keeper Simon Doherty who pulled off a terrific double save to deny both Andrew Mackin and Conor Deane from close range.

The home side drew level on 63 minutes with Dean Gaffney's second point from play in the half. Unfortunately, a minute later Louth keeper Ruairi Morrissey made his only error of the game when dropping a ball from distance.

Eoin McGuinness blasted it into net with the rebound from close range, as Louth now trailed for the first time. Successive points from McGuinness, again, and Tiarnan O'Neill appeared to set up Armagh for an unlikely victory.

However the men in Red then displayed that never say die attitude as Geoghegan took his personal tally to nine points with another brace of frees. The drama was not over, as unbelievably they drew level on 69 minutes when substitute Mark Gahan fired home their third goal from close range.

With his tenth point of the encounter Dean Gaffney appeared to have won it for the home side. A foul on Conor Quigley presented Geoghegan with the opportunity to tie up matters from close to the 65-metre line but unfortunately his effort went narrowly wide of the left-hand post with the referee immediately afterwards blowing the final whistle.

As McCormack stated afterwards “It's at least a point, if not two points dropped” and how true those words were. Louth will now hope to build on this performance when they host Roscommon, who drew with Tyrone on Sunday, at Dowdallshill this Sunday afternoon at 2pm.