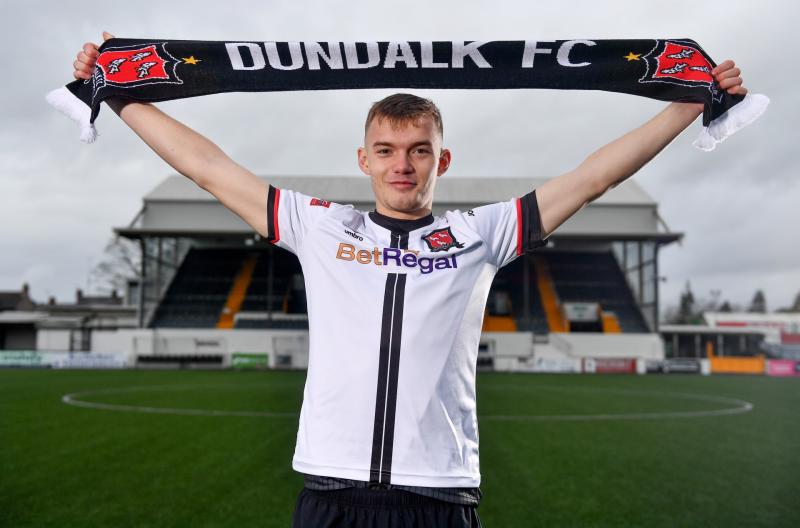 The start of the new season is getting ever closer, with Friday night's Malone Cup clash with Drogheda United being Dundalk FC head coach Stephen O'Donnell's last chance to fine tune his troops ahead of the new season.

In line to make a debut in that fixture is the club's newest recruit Lewis Macari, who arrives at Oriel Park on a six month loan from English Championship outfit Stoke City.

The 20 year old is a third generation footballer, his father Paul having made his name at Stoke too, while his grandfather Lou is best known for his time on the books of Celtic and Manchester United.

Lewis has come through the ranks with the Potters, regularly featuring on their youth teams during his six years at the club. Up to now he was a mainstay in their U18 and U23 sides but has yet to make his debut for the senior side.

“I spoke to Michael O’Neill, the manager at Stoke City, and he wanted me to come over here and get some men's football under my belt,” he told dundalkfc.com.

“The League of Ireland is competitive, it’s tough and it’s completely different to what I’d be used to so it will be a good experience for me, both in terms of football and life in general, to come here.

“I’ve played in a lot of positions and I’m known as quite a versatile player but I think I’ve come over here mainly as a right-back and I’m looking forward to it."

Stephen O'Donnell personally picked up the young defender from Dublin Airport and drove him to Dundalk for the first time, a journey which was filled with only one topic, football. The Potters play with a high intensity game, something that the Galwegian hopes to bring to the Lilywhites, meaning it shouldn't take long for him to adjust to the new environment.

“Lewis comes highly recommended from Stoke City,” said O’Donnell. “We have watched him and he is very versatile. His primary position is right-back but he can also fill in at centre-back and left-back.

“He is very reliable and he has a great temperament which is very important and we are looking forward to working with him. He will be involved against Drogheda on Friday and his last game for Stoke was only last week so, from a fitness point of view, that is a great starting point.”

Dundalk welcome Louth rivals Drogheda United to Oriel Park this Friday night (kick off 7:30PM), with tickets costing €10 for adults and €5 for children. They are available on the club website or can also be bought on the night.

Tickets for this event cost €5 with all proceeds going to Women's Aid Dundalk.

Appeal lodged with An Bord Pleanála