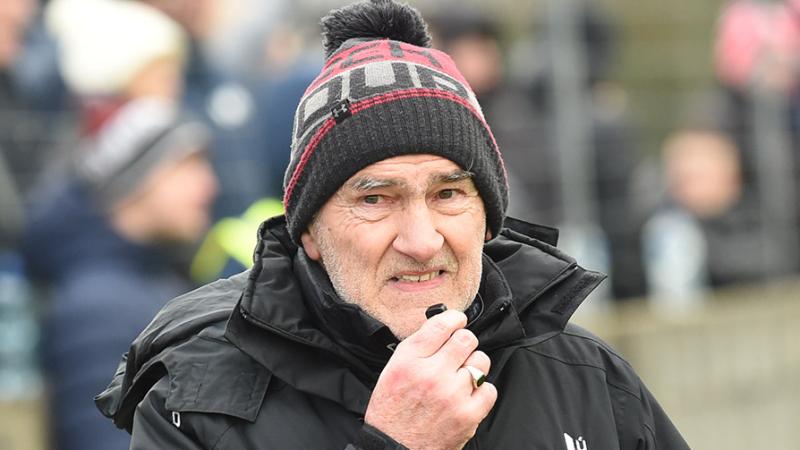 Louth manager Mickey Harte had plenty to ponder as he spoke to the media following Louth’s loss to Laois in the first round of the National League. They had their chances, played some nice football but ultimately only one team came away from the tie with any league points on the board.

As can be expected in games at this time of the year, conditions played a big role on the contest and the former All Ireland winner feels the elements had a factor in deciding how they ended up approaching the encounter.

“I think probably we were a wee bit passive with the breeze that we had, but you could see that they had a lot of players behind the ball” reflected Harte. “It was kind of asking you to kick the scores from far out or else be patient and try and create things and it wasn’t easy to find our inside men.

“I think there were times when we could have and didn’t because we were focused on retaining possession and playing around the perimeter. Maybe we weren’t incisive enough at that time. But when we did, they were goal chances so there is a lot to learn from it.”

And it was a positive mindset which Harte, now in his second year at the helm of the Wee County, concentrated on as he dissected what went right and what went wrong.

The soft goals got in quick succession were of course the key to their demise, however he was happy his troops showed an urgency to battle back in the final moments when the game looked lost as well as putting in a strong start that if more clinical could have seen them over the line.

“We should have been ahead by six or seven at half-time and we wouldn’t have been flattered by that – we knew we needed that kind of margin with the gale that was out there, and I do believe it got worse in the second half.

“I would be pleased, if we’re talking about quarters, in the last quarter we put serious effort in, got our own goal and missed two or three others, so I think you have to give the players total credit for the way they set down to the task.

“It was like a hopeless case at that stage, as by early in the second half they were in such an unassailable position. It could have been a cricket score and it’s to our men’s credit that they didn’t let that happen. They battled away until the end.”

Giving credit to his players is all good and well, but the perennial winner knows that what matters in the National league is getting points on the board and next for the Boys in Red is a date with Longford in Pearse Park this Sunday (Throw in 2PM).

“It is like a four-pointer next week, because Longford lost their first game too and this will be a critical game for both counties” he noted. “If you were to lose the first two games, then you are definitely looking at the wrong end of the table and into survival mode from there on in.

“That is not good place to be, I’d like to be thinking that we can get a couple of points, Longford will obviously be thinking the same thing, but two points next week will sort of level things up again and give us more hope to say there’s the possibility of other points after that.”