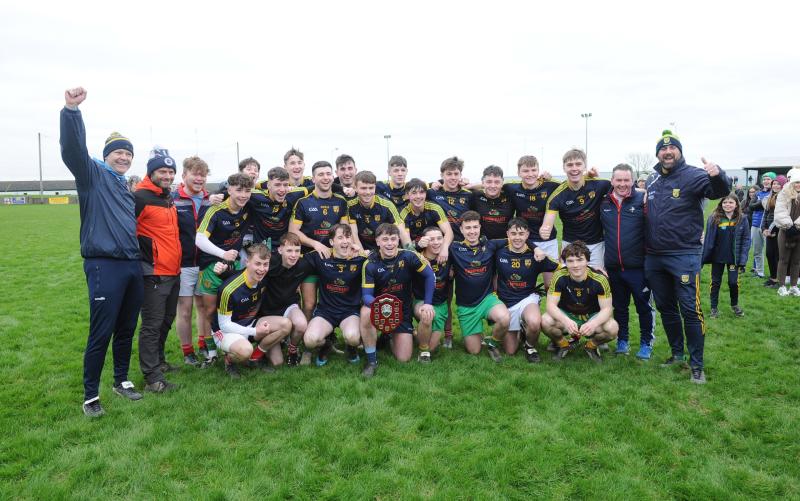 The Stabannon Parnells/ O’Connells/ Baile Talún amalgamation side celebrate with the trophy following their win in the U20 Shield. (Pic: Arthur Kinahan)

It proved to be roles reversed from last weekends under 20 showpiece decider, as the amalgamation side proved too strong for their opponents this time.

A combination of Stabannon Parnells, O’Connells, Glyde Rangers and the Westerns proved too strong on this occasion and deservedly took home the U20 Shield after seeing off St Kevins in Dunleer.

The amalgamation side were full value for this victory, which once again saw Stabannon young stars Seán Reynolds and the Butterly brothers Harry & Bobby sparkle.

Most of the scores and exciting play from the Parnells side came through the hard running of Reynolds from the middle sector and the fit again Bobby Butterly from centre half back, while Harry Butterly once again treated supporters to an exhibition of point taking with both feet.

Unfortunately, the young forward had to be withdrawn in the second half due to a suspected broken collarbone. Ryan Halpenny also deserves plaudits, looking very assured in the sweeper role.

The Baile Talún combination dominated from the start, with Seán Reynolds oozing class along with Bobby Butterly and Mathew Kane also winning copious amounts of breaking ball. The supply into the full forward line and Harry Butterly in particular, enabled them to grab a significant lead early on.

They registered 0-6 on the scoreboard before St Kevins finally landed their first score from a TJ Doheny 45, leaving it at 0-6 to 0-1 at the first half water break.

Three of those Stabannon/O’Connells/Baile Talún white flags emanated from Harry Butterly, while Oisín Lynch and a fisted effort by Mathew Kane from a Butterly 45 settled them down early on. St Kevins keeper Brandon Johnson also tipped a Lee Finnegan effort over the bar.

Two further Butterly scores from either foot stretched out that lead to seven, as the amalgamation outfit emphasised their dominance in a half which saw them win nine from 12 St Kevins kickouts.

St Kevins needed a moment of inspiration and they got it when a lovely passage of play involving TJ Doheny saw Evan Maher set up Josh Finlay who fired the ball to the bottom corner to close the gap to four at 0-8 to 1-1 with five minutes of the opening half remaining.

Doheny and Butterly then traded free kicks, leaving it at 0-9 to 1-2 in the Stabannon/O’Connells/Baile Talún side’s favour at the interval.

The third quarter saw scores coming at a premium, with TJ Doheny and Harry Butterly once again trading scores early on. Desperate to make inroads into the deficit, St Kevins’ TJ Doheny had switched places with Cameron Maher, moving the latter to centre half forward and Doheny to number six.

However, the Kevins only managed two more scores in that third quarter, both coming from Doheny as they saw several attacks break down and scoring chances go astray.

You felt with every Kevins attack that broke down, a score or two from the Parnells/O’Connells/Baile Talún outfit could land a major psychological blow and it proved to be the case when they scored 1-1 without reply either side of the water break.

Johnny Magee calmly slotted over from play, before that man again Seán Reynolds’ incisive running saw him set up the Westerns’ Mathew Kane who coolly poked the ball to the Kevins’ net to make it 1-11 to 1-5 in his side’s favour with five minutes remaining.

Despite a terrific effort from play by James Harper, there was no doubt about the outcome of this final, as Seán Reynolds landed a late point which his 60-minute performance richly deserved.

It wrapped up an excellent day for the amalgamation team, as joint captains Gerard Bourton and Bobby Butterly were presented with the under 20 Shield afterwards, with that trio of Reynolds and the Butterlys looking every bit the real deal.

Inside Track: How Louth GAA's top trophies got their names