Inside Track: How Louth GAA's top trophies got their names 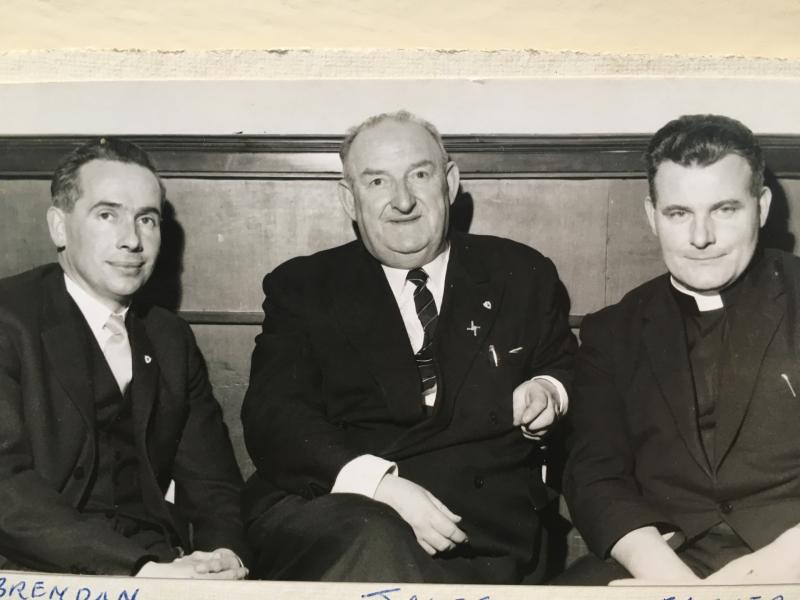 Seamus Flood, after whom Louth and Leinster trophies are named, is pictured in centre with former Co Board chairman, Brendan Breathnach, and Rev Fr John Finn at a GAA function in the early 1960s

The Joe Ward Cup is probably the best known of Louth sport trophies. As is well known, it goes to the winners of the county’s most prestigious GAA competitions, the senior football championship.

The Corn Cuchulainn, mentioned here last week because of its similarity to the Australian Men’s Open tennis championship trophy, which is presently being contested in Melbourne, is another that is easily identified. It and the Ward Cup were contested for the first time within a year of each other.

For the record – not that many would be terribly interested, given that coursing is a minority sport – the Cuchulainn’s first winner, in 1948, was a dog by the name of Redchair Express.

Tom Sherman was first to be presented with the Ward Cup as captain of Stabannon Parnells, whose 1949 win was at the expense of their great rivals at the time, Ardee St Mary’s.

The Brian McConville Cup, commemorating a hugely popular local player who was an FAI Cup-winner with Dundalk in a successful League of Ireland career, is much sought after by junior footballers.

Robbie Rafferty’s excellent A Century of Local Soccer 1919-2019 tells us that it went on display for the first time in 1978, when Bank Rovers had a 1-0 win over Rock Celtic in the decider. Muirhevnamor FC have been supreme in recent years.

This article takes a look at those who give their name to Louth GAA trophies. It will be September before the Ward Cup is contested, but before then the likes of the Cardinal O’Donnell, Macardle and Sheelan Cups, along with the Mullen Shield, will be competed for in league competition in the different grades.

A Dundalk man who lived in Chapel Street, Joe Ward first got involved in GAA affairs at official level in 1898, as a Young Ireland delegate attending the county convention. He graduated to become Co Board secretary.

A move to chairman followed that, and he was in this position on a number of occasions until his retirement as an active officer in the mid-1920s. He was named the county’s first honorary president in 1926, in recognition of his outstanding service.

There is no record of Joe Ward having featured on any of the good Young Irelands teams of that era, but he was involved in football, filling the role of selector with Louth’s All-Ireland-winning team of 1910. He died in 1948, and within a year was commemorated with what has become the county’s most identifiable trophy.

Seamus Flood, who gives his name to the cup which goes to the winners of the intermediate championship, was a footballer, but, like Joe Ward, is best remembered for his variety of roles at administrative level.

From Dundalk’s St Patrick’s Street, the father of Louth’s 1957 All-Ireland goalkeeper, Sean Og, first lined out with O’Mahony’s as a minor. He was then linked with two other town teams, John Dillons and O’Rahilly’s, before switching to Clan na Gael in 1920.

His career with the Castletown club – playing in goals, as his sons, Sean Og and Seamus would in years to come – was most productive.

He won championships and league medals in the early 1920s, and in 1928 featured on the Louth team that won the Leinster junior title. It was around then that he began to get involved in County Board affairs, and though still in his early 20s, was elected chairman for the first time.

After a spell in Thurles – to where he’d been transferred for postman duties and during which he linked with the local club – he returned to his native county, and in 1929 was again elected chairman, a post he held for almost a decade. While working out of Greenore for a time, he served as Cooley Kickhams chairman.

In tandem was his involvement at Leinster Council level, and here he became the first from the county to be elected the provincial body’s chairman.

He was also Louth’s voice in Croke Park as Central Council delegate for almost a decade, and if all of that wasn’t enough to keep him occupied, he was active at football level, playing a major part in the county’s All-Ireland minor championship wins of 1936 and ’40.

And in the Marist College’s McRory Cup successes in the same period. In addition to all of that, he covered the GAA scene for the now-defunct Dundalk Examiner for upwards on 20 years.

Seamus Flood died in 1970 at the age of 69. Louth Co Board named the trophy for the reintroduced intermediate championship in his name in 1978, and the Leinster Council was quick to follow, the Flood Cup going to the winners of the under-21 (now the under-20) football championship.

There was a time when the Christy Bellew Cup went to the winners of the county’s second-most important football championship. Junior is now the third grade, but the cup that goes to its championship winners has lost none of its luster.

It has been contested as long as the Ward Cup. St Bride’s were its first winners, the Knockbridge men beating Kilkerley Emmets in the final. (The result was the same when the two teams renewed rivalry in the intermediate final a couple of years ago.)

Christy Bellew was also a Co Board chairman, serving in the mid-1920s. He was later a vice-chairman, representing the Drogheda club, Larks, and when he stepped down as chairman in 1928, he was succeeded by Tom Burke, who, aside from his involvement in administrative affairs, was also a footballer and match official of note.

Tom Burke is the only Louthman to have refereed an All-Ireland football final, the Drogheda man taking charge of the 1928 meeting of Kildare and Cavan, when the Sam Maguire Cup went on offer for the first time.

It was around then that the Cardinal O’Donnell Cup went on offer. It went to the 1928 championship winners, Drogheda’s Wolfe Tones, but later became a league trophy.

Cardinal O’Donnell was in residence in Armagh’s Ara Coeli back then, and a Superintendant Bernard O’Boyle, representing the Garda club, was delegated to speak to the Cardinal, asking him if he would donate a trophy.

The Cardinal readily agreed, and the trophy, a replica of the Ardagh Chalice, was struck at the cost of £25. It has certainly stood the test of time, and numerous raucous celebrations.

But even older than that is the Macardle Cup, donated by Dundalk-based brewers, Macardle-Moore.  It had its first outing in 1921, Drogheda’s Boyne Rovers defeating Clan na Gael in a refixed final after the first meeting of the sides had been abandoned due to a pitch invasion.

It was a junior league competition then and still is. Glen Emmets, like others, probably don’t realise they were the centenary winners last year.

Cooley Kickhams were first holders of the Rannafast Cup, winning it in 1944, and it’s a former member of the peninsula club who’s commemorated by the Sheelan Cup.

A great Sean O’Mahony’s stalwart has his name on the Kevin Mullen Shield, while Jimmy McShane, renowned for his work with Lannleire, is among others honoured in this way.