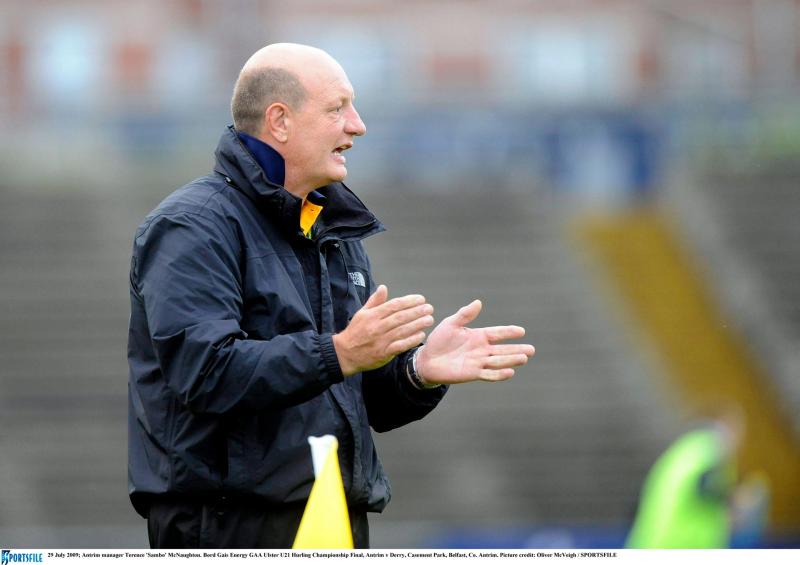 While it’s said there was dissention in the Kilkenny camp at the time, the Cats were warm favourites and they prevailed, winning by 2-18 to 2-11.

Antrim, with McNaughton playing a leading role, gave a good account of themselves, but the abiding memory of the day was the match-winning performance of Harry Ryan, the diminutive corner-forward almost single-handedly dragging his side over the line. Future GAA president, Nicky Brennan, was among the winning team’s subs.

The Dowdallshill club had the place in great order for what was a festival of hurling. There were three matches on the programme, the All-Ireland under-16 and minor semi-finals – in each of which Antrim played Offaly – providing back-up to the main event.

The Pilkingtons brothers were beginning to emerge in Offaly, while there were several of the Elliott clan on the Antrim sides. Johnny and Declan Pilkington would figure on the Offaly All-Ireland-winning senior side of 1994.

This wasn’t the first All-Ireland hurling semi-final to be played in Louth, nor, indeed, Dundalk. In fact, it was the third. As far back as 1902 Dublin played Derry in Drogheda, perhaps at Shamrock Lodge or Waterunder, but not the Gaelic Grounds, for it wasn’t until the mid-1920s that the first games were played there.

Dublin won by a big score but were then beaten by Cork in what the records say was a ‘home’ final. Five years later, Dublin was back in this county for another semi-final, this time playing Antrim. Dundalk’s Athletic Grounds was the venue for the Dubs’ 5-10 to 2-5 win.

It’s difficult to know what exactly was going on at the time. Dublin’s match with Antrim was played on March 15, but then on May 24, the Leinster final was decided, and by beating Dublin in it, Kilkenny, represented by Mooncoin, qualified for the All-Ireland final, in which they beat Cork by 3-12 to to 4-8.

‘Sambo’ McNaughton’s Antrim were back at St Brigid’s Park in 1989, this time to play Kildare in an All-Ireland quarter-final. They won handsomely, earning them the right to meet Offaly in the semi-final at Croke Park.

The publicity for Thursday night’s programme said that Antrim’s win over Offaly – by 4-5 to 2-15 – was the greatest-ever shock. Hardly, since the Glensmen had been knocking on the door, and were gaining momentum.

Their wing-full, Des Donnelly, was on Annaverna the following day, competing, as he often did, in Poc Fada na hEireann.

It didn’t work out for Antrim in the final. Unable to contain the livewire that was Nicky English, they went down by 4-24 to 3-9.

But as always when an Ulster team made a first or rare visit to Croker for a big match, supporters were out in strength, bringing a display of saffron that had never before been seen at the stadium.