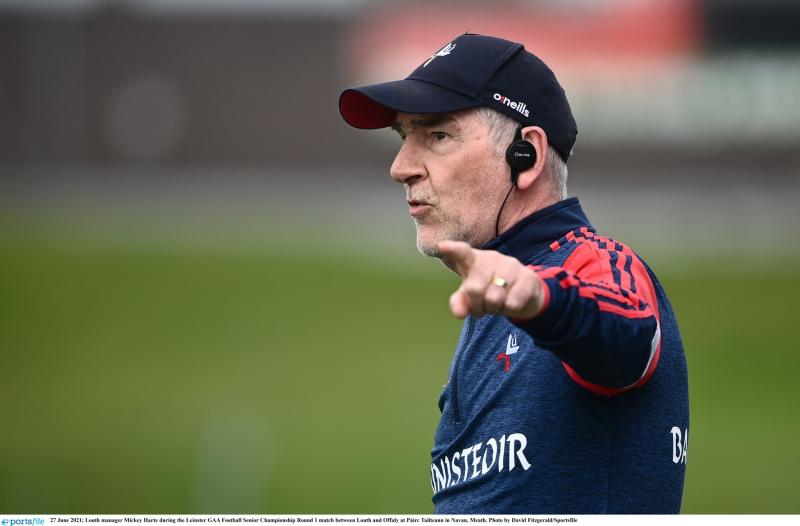 It has certainly been a year of progress for the Louth Senior Footballers in what was their first year under the tutelage of the legendary Mickey Harte.

Under the leadership of  the Tryone native, the Wee County gained promotion from Division Four of the National League before putting it up to Offaly in Pairc Tailteann where it took extra Time for the Faithful County to put them to the sword.

After a couple of years in the doldrums of the sport, Louth is slowly rising and will be hopeful of continuing to build on this year’s success in 2022 and beyond.

However not everyone is happy about everything going on within the county set up, with some delegates at last Monday’s convention questioning the Tyrone native’s long-term commitment to the county.

Speaking up following Peter Fitzpatrick’s Chairman’s address, St Mochtas delegate Paul Murtagh spoke of how little was known about Harte’s long-term goals for the county and wondered if he would ever get more involved with the underage setups in the county.

“Mickey Harte took over the Minor team in Tyrone first, he built them up and then he went to the Senior team, so I’m surprised he hasn’t got involved more in underage football” noted Murtagh.

“The question I’d be asking is what are his goals or is he just going to take us up one more division like Colin Kelly did, then head away into the sunrise and we go back into Division Four two years later?”

In response to these comments, Fitzpatrick spoke about how he said from day one of his tenure in the role that he planned to be “open and transparent” about what was going on in the county. He told the delegates in attendance that they had spoken to Mickey Harte about their five-year plan for Louth.

He confirmed that behind the scenes both Harte and Gavin Devlin had been working with development squads and they had committed to working with these up and coming prospects over the next few years.

“I would encourage anybody, if you get the opportunity, go up to Darver any day, you will some amount of young players up there. Whether it is U8’s or development squads I have never seen Darver used as much as it is at the moment” noted Fitzpatrick.

“Mickey has done a terrific job, if you go up there on a Saturday you will see Mickey and Gavin up there recognising the players between the ages of 20 and 23, there is 15 to 20 players up there every Saturday morning being coached by them.”

The former county manager spoke passionately about the positive impact the arrival of Harte was having on the whole county, both in boosting the profile of the county team and giving a new lease of life to those dreaming of making it onto the Senior panel.

In relation to comparisons with neighbours Monaghan, an issued also raised by Murtagh, he talked about how they were once in the same boat and that they would leave “no stone unturned” in making sure they get the most out of the multiple All Ireland winners services.

“Monaghan went down to Tyrone 10 or 15 years ago having not one a Minor Championship for 60 or 70 years and what they did was copied the type of training Tyrone was doing and now they have four or five Minor Championships.

“You have to take your hat off the Mickey. Any club game, Junior, Intermediate, or Senior, Mickey and Gavin were at nearly every championship game which is unbelievable. Hail, rain or snow they were there and I do believe all the best players have now made themselves available.

“We asked Mickey Harte to do a long term job, we are not looking a quick fix, we don’t want to get up to Division Two and all of a sudden in a couple of years come down again. I promise you we have done a lot of good work and us as a management committee are fully behind all coaches in Louth Football.”