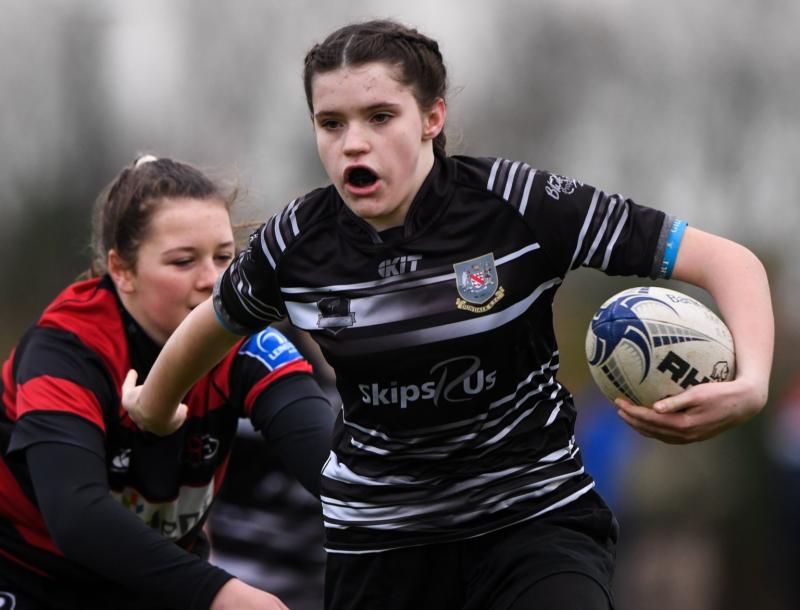 Poppy Veale of Dundalk RFC in action against Arklow during the Leinster Rugby U14 Girls' Plate Final. (Pic: Sportsfile)

It was a tough day at the office for the two Dundalk RFC Girls teams competing in the Leinster Plate finals in Carlow as their U14 side were denied in a cruel fashion versus Arklow while their U18 side was outclassed by a ruthless Navan outfit.

From early on they began to test the Arklow defence with some great running and attacking plays. To their credit Arklow held firm under the pressure and eventually started to impose their game on Dundalk.

10 minutes in Dundalk conceded the game’s first try and soon after this found themselves another score down due to the powerful forward play from Arklow. At 12 - 0 down, the girls from the Mill Road found their game and got back into the final with a try from Alysah Hollywood.

Arklow struck back almost immediately, their forward pack making some powerful runs and eventually they went over the line to make it 17 - 7.

Just as half time was approaching Dundalk began to exert some pressure on Arklow’s defence and were rewarded with another try after some great line breaks, Alysah Hollywood touching down again for her 2nd try of the match.

After the break the game continued in the same manner, with pressure being applied by both teams but it was Arklow who found the next score to make it 22 -10.

This just seemed to spark the Dundalk girls into action, and they scored a great try of their own with Ellen Bermingham touching down to make the game 22 - 17.

Sadly, it was Arklow that struck next to stretch the game out to 29 -17 with about 5 mins remaining. Most teams would have put their heads down and gave up but not these girls from Louth.

They produced a stunning comeback, as some great play through the hands in the centre of the pitch eventually found Poppy Veale on the wing who powered for the line to make it 29 - 22 with two mins remaining.

Arklow restarted the match and Dundalk found themselves on the front foot again, as superb play throughout the whole team, forwards and backs, led to another converted try for Dundalk to leave it 29 - 29 at the fulltime whistle.

Due to the rules of competition no extra time was played, and it went down to who scored the most tries. Both had bagged five, so the next criteria to decide the winners was whoever scored the first try and sadly that was Arklow.

The Dundalk Girls were devastated, but have so much to be proud of on a day where they showed the "never give up" attitude that can only stand to them in future games.

The Dundalk U18 girls went down later that afternoon to a superb counter attacking Navan side by 61-5, the Meath girls having outscored Dundalk 11 tries one, the Dundalk try being scored by Outhalf and Leinster Northeast Player Sophia Murdock.

The score line suggests that it was a one sided contest, however it was fairly 50:50 when it came to the possession stakes for both sides.

But when it came to scoring from counter attacks, the girls from Navan put on a masterclass in assured handling and were always able to create a two on one overlap on the wings to score.

Dundalk’s fringe attack and fringe defence, as well as their counter rucking was very good, yet when Navan did get the ball, they couldn’t be stopped getting the ball to the wide channels.

Dundalk’s player of the match was center Nicola Campbell - who really thrived against this high calibre opposition.