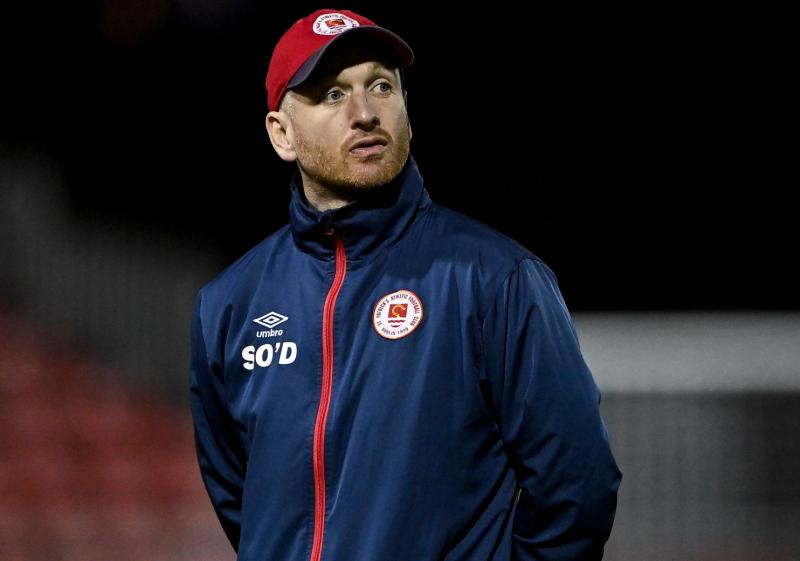 Former St Patrick's Athletic Head Coach Stephen O'Donnell is expected to take over at Oriel Park, but a disagreement between Dundalk and Pats has delayed official confirmation. (Pic: Sportsfile)

Having captained the club during its most successful period in history between 2013 and 2018, Stephen O’Donnell’s imminent appointment as the new head coach has been well received by supporters.

However, his return to Oriel Park has yet to be formalised, with the St Pats hierarchy understood to be extremely displeased at the way in which business has been conducted. The 35-year-old Galwegian publicly announced his departure from St Patrick’s Athletic last Friday.

They believe that he had verbally agreed to a two-year extension of his contract at Richmond Park and are thought to be seeking out compensation from The Lilywhites.

The Inchicore club have already appointed a replacement, with former Drogheda United boss Tim Clancy – who was also on Dundalk’s shortlist – confirmed a day prior to the former midfielder's resignation going public.

That resignation paved the way for O’Donnell to link up with Dundalk, having transformed the Pats' fortunes. They ended the season in 2nd place and brought the FAI Cup trophy back to Richmond Park for the first time since 2014.

“Today, I informed St Patrick’s Athletic of my decision to resign as head coach,” he said. “I understand that the club and the supporters will be disappointed with my decision.

“However, I hope that, despite their disappointment, they can recognise that I have given everything during my time in charge. I certainly feel like I could not have worked any harder and I am so proud of the exciting team we have built over the past two years.

“I would like to thank the coaching staff, the players and the club’s supporters – all of whom have been incredible during my time at the club.

“I would also like to give special thanks to Garrett Kelleher for giving me my first opportunity in coaching and I hope that he feels that I have delivered upon the faith he has shown in me.

“Sunday’s FAI Cup success was one of the proudest moments of my life and an achievement I will cherish forever. I believe that the club has made terrific progress and is in a great place. I would like to sincerely wish everyone at St Patrick’s Athletic all the very best in the future.”

O’Donnell will be joined at Oriel by former Arsenal player Patrick Cregg, who follows him from St Pats as assistant, but neither currently hold the requisite UEFA Pro Licence.

That means another coach will likely complete the management team next season, with ex-Republic of Ireland manager Stephen Staunton already being linked to the position.

However, in any event, O’Donnell will be the direct replacement in the dugout for Vinny Perth, whose expected departure from the Oriel hotseat was also confirmed last week.

A club statement read: “We can confirm that Dundalk FC and Vinny Perth have parted ways.

“Everyone at the club would like to thank Vinny for the immense contribution he has made to Dundalk FC over the past nine years. His name will always be linked to a glorious spell in the club’s history.

“After being appointed as head coach in 2019, Vinny led Dundalk to the SSE Airtricity League title, the EA Sports Cup, the Unite the Union Champions Cup and the FAI President’s Cup. The Lilywhites were only denied a clean sweep after losing a penalty shootout to Shamrock Rovers in the FAI Cup final.

“Prior to that, he spent six years as Stephen Kenny’s number two during a period that saw unprecedented domestic and European success arrive at the club.

“Between 2013 and 2018, Dundalk won four SSE Airtricity League titles, two league and FAI Cup doubles and also made history by becoming the first – and only – Irish club, to date, to collect points in the group stages of a UEFA club competition.

“Vinny will always remain a much-loved, respected and significant figure amongst Dundalk FC supporters. We wish him, and his family, the very best of luck going forward and will always welcome them back to Oriel Park in the future.”

Meanwhile, Daniel Cleary looks set to complete a move to Scottish Premiership side St Johnstone, who have tabled an offer for the defender who joined Dundalk back in 2018.