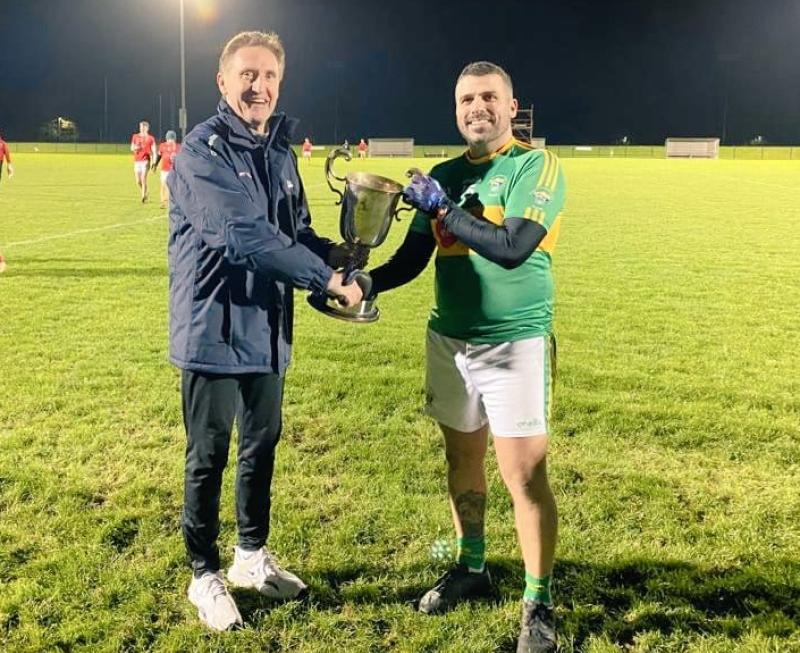 Hunterstown Rovers started the game confidently, kicking the game's first four points while the lads from the Quay had plenty of possession but seemed toothless up front.

However the evergreen Liam Dullaghan, who also played in midfield 19 years ago when O'Mahony's last won this competition, finished off some great approach play to get his team off the mark, just before the first waterbreak.

In the second quarter, the lively Danny O'Brien fired two great points over in quick succession while Tomas Rice judged the wind expertly to float over a free, which left the half-time score 0-5 to 0-4 in favor of the mid Louth side.

With a full bench chomping at the bit to get some action, Anto Mackin and Barry O'Brien didn't hesitate to make use of the subs, Mark Agnew squeezed the ball over the bar from a tight angle shortly after shedding his tracksuit, following a fantastic length of the field run from Kian McEvoy.

Shortly afterwards Conor Mackin lofted over the bar from near the same spot, before both wing backs decided to get their name on the scoresheet. First Robbie Clarke's trusted left boot floated over from distance on the right before the ever hard working David Redmond capped another brilliant performance with a long range beauty from the other side of the pitch.

However Rovers clawed back two more points to leave the Dundalk lads only a solidarity point ahead at the second water break leaving it all still to play for in the final quarter.

At this stage the O'Mahony's half back line and midfield duo were well on top, Liam Dullaghan calmly controlling the play while Conor Murphy was getting a huge amount of possessions, somehow he always seemed available to his defence.

It was the fresh legs off the bench who supplied the last five points of the evening. Big Brian McGuirk somehow fired two monster scores from distance, while Terry Kelly knocked over two frees plus one from play from long range to wrap up an important victory for the Point Road club, 0-13 to 0-8 points.