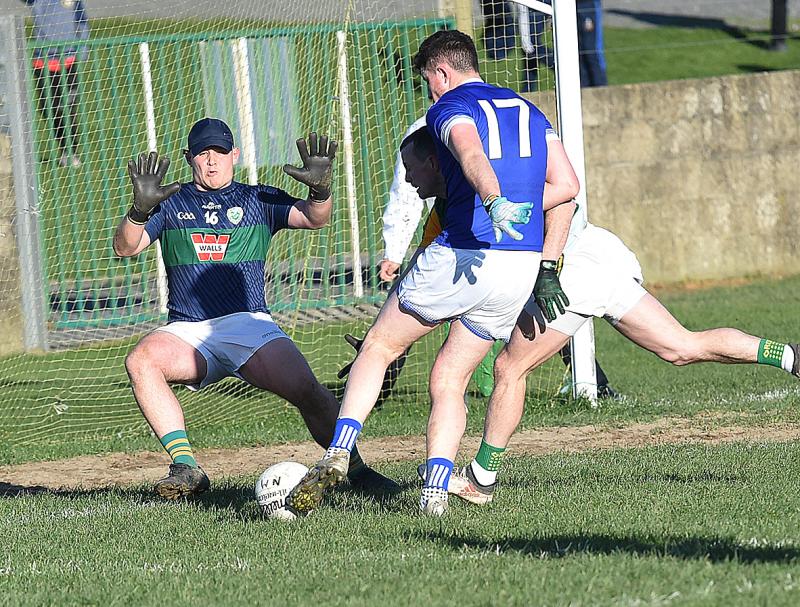 Not happy enough to have romped home in the race for the Joe Ward Cup, Naomh Mairtin continued their county momentum into this first round Leinster tie as they coasted home to a 14-point victory over the Carlow champions Rathvilly in Haggardstown.

Whether it was the fatigue of three games in as many weeks, the fact their major hurdle was usurping Eire Og’s grip on the Carlow Senior Title or just the fact they simply weren’t up to the levels set by the Men from Monasterboice, this Leinster matchup was as good as curtains by half time.

The Barrowsiders gave a good count of themselves early on, however a blitz of 2-3 without reply quickly put the game to bed as sadly for Fergal Reel, his side were not tested to the levels they would have hoped for. This could come back to haunt them later in the competition.

There was a gale force breeze present at the home of the Geraldines GFC, the visitors to Louth had it in the first half and if they were to muster any sort of challenge they needed to utilise it.

Throughout what was a shaky and nervy first ten minutes, the Carlow side had the lion’s share of possession. They drew five fouls around the middle and used this as a platform to get their game going as they hoped to use the breeze to bag scores from distance.

Despite playing three up top, these men were completely isolated as they refused to pick them out, instead going for scores from range, relying on their place kickers or trying to run the ball into better positions. A bad idea as anyone who has seen the Martins this year will know.

Time and time again they ran into a Blue wall, as Reel’s well drilled defence kept the men in Green at bay throughout the contest.

Despite having so much of the play, it was the Martins who got the scoring underway as Louth captain Sam Mulroy soloed in at pace and won a free which he duly tapped over on two minutes, but Rathvilly responded with an impressive sideline effort from Alan Kelly.

That was sandwiched in between two poor wides from placed balls from Brendan and Brian Murphy, but overall they just weren’t creating enough chances with the possession they were receiving and were lucky to be just 0-4 to 0-2 down by the first water break on 16 minutes.

Once the Monasterboice men got going there was no stopping them. Against such a stiff breeze they favoured running the ball at pace before looking to get Conor Whelan onto the ball wherever possible, usually courtesy of direct long passes from the likes of John Clutterbuck and Eoghan Callaghan.

The movement of Whelan, Mulroy and Stephen Campbell was causing chaos among the Rathvilly backs, as they quite easily cut them open with 2-3 in a six-minute window to make sure there was no questions about who was going to run out as winners.

The first of the decisive goals came via a mistake from goalkeeper Tom Pilkington who was a late change to the Carlow side’s line up. A misplaced kickout found Mulroy who happily teed up Whelen, with the keeper now off his line he took no prisoners when blasting it home on 24 minutes.

The second came just before half time five minutes later as Clutterbuck looped a pass into the air towards goal, it was nicely caught by Val Leddy who in his first championship start of the season turned his marker and buried it home.

Coupled with points from Mulroy, Leddy and Whelan, all got from play, the Louth champions had built up a nine point cushion at the break, 2-7 to 0-4 leaving Rathvilly with a mountain bigger then Mount Leinster to tackle come the second half.

Pat Ryan’s troops came out to try and make a game of it, but now against the breeze and with a such a big deficit it was hard to see them taking much of a dent out of it. The second half saw them up the pace, utilise more of their forwards and go for goal at all opportunities.

Former Carlow county star Brendan Murphy was an ever present everywhere for his team, trying to regain possession as an extra defender in the full back line while also acting as an anchor between the midfield and attack and he was one of few pluses on a day to forget for his side.

From the throw in he managed to get free from the grasps of the Martins defence and tee up Jake Elliot only for him to hit the post. They got the next score of the game from a free on 34 minutes but did not score again for 21 minutes. A timeframe where the Martins showed no mercy.

Reel’s troops turned the screw once more, tightening their grip around the middle in particular as a dominance in this sector led to Rathvilly having to soak up wave upon wave of endless pressure.

Every score was followed by a turnover, either directly from their kick outs or within seconds of them winning the ball as the Martins work rate and commitment to win every battle led to the Carlow side being camped in their own half.

Seven scores in a row came through this fashion, Mulroy notching five and Wayne Campbell two as the Martins did with the wind what the Barrowsiders couldn’t. Score from range.

Late on they did bag a late consolation goal, Brian Smyth’s close range free rebounding into the path of Conor O’Neill who in a crowded square was the first to react and duly fired home past Craig Lynch.

A great performance from the Martins, but once again they have not been tested. Can Shelmaliers of Wexford be the first side to do so when they travel to Louth next Sunday? Only time will tell.