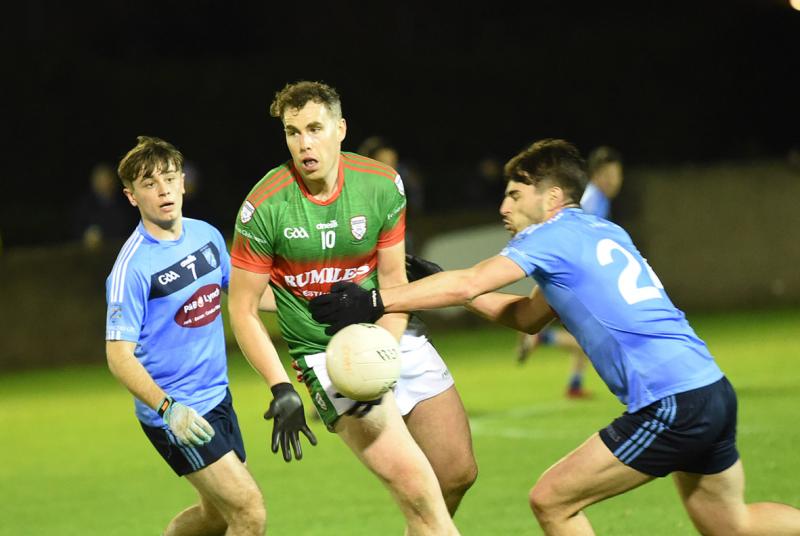 Glen Emmets steamrolled Meath opposition in Drogheda last Saturday afternoon to win by a fully deserved nine point winning margin. St Vincents were never at the pitch of the game and had no answer to the scoring ability of both of Tullyallen’s wingers.

Ronan Grufferty and James Butler are the named duo, both are no strangers to notching up high tallies this season and in Butler’s case, he was making up for lost time after missing out on the triumphant Louth Junior Final display through suspension.

To make matters better for Raymond Lambe’s men was their impressive high-level performance was carried out without both Grimes brothers, county star Conor and influential centre back Danny.

Despite the huge losses, both Grufferty and Butler had three points beside their name just shortly after the first half water break.

Former Emmets manager Hugh Durrigan was in the opposing dug out so he would have been well aware of the threat posed by the dynamic twosome and the cover for the injured Grimes also.

But the knowledge accumulated the past two seasons mattered little between the white lines as Vincent’s were flat from the off.

With David Bracken playing in his third Leinster campaign, his calming influence as sweeper really told as he broke up numerous Ardcath attacks in a scrappy opening period. Eventually Butler would open the scoring.

Nigel Hand did level straightaway, but Emmets landed the next five scores of high quality from Grufferty and Butler. That lead poured into Emmets youngsters Cathal Maguire and Cian Talbot and their confidence soared.

Vincent’s did enjoy their best spell in the run into half time, Robert Tallon landing the pick of their four unanswered scores to make it a one-point game. Yet despite the game being poised at 0-7 to 0-6 by the interval, the thoughts of a close encounter in the second half were wishful indeed.

That pressure could not be sustained by the Meath men, in recovering from their bad start they exhausted themselves and as a result Emmets stormed to an emphatic second half display.

Tullyallen corner forward Eoghan Maguire set the tone with a well taken point to ignite a whopping 2-6 to no score run. Kealan O’Neill lashed over a long range free while Butler spun over his best point of the afternoon.

Substitutes Tom Grimes and Tadhg Downey then got in on the rout. Downey collected a terrifically floated cross field ball from Andrew Mooney behind his marker, swivelled to make space and score to the bottom left corner with his first touch.

Mooney himself got in on the act with a fine point before Evan English found himself in the opposing square to flick a Kealan O’Neill high ball into the back of the Vincent’s net.

Frustrations grew for the men from Meath in this period and Conor Harford and Ryan Hand, both half backs, would pick up black cards and the clock ran out before Hand could return meaning they played large chunks of the second half with 14 men.

Thomas Field scored the maroon and white’s first score of the half from the most unlikely of places, a sideline ball in the Drogheda United corner of the field, having gone 28 minutes of the half without pointing.

To their credit they ate into the Emmet’s lead with another three points in a row but at this stage the victory was already secured and the men in Green and Red had dropped down a few gears, as a result their concentration was waning.

Both sides would finish with fourteen men when goalscorer Evan English also picked up a black card, however the damage had already been done for an excellent opening day provincial victory for Tullyallen. There could be more of them before the year is out.