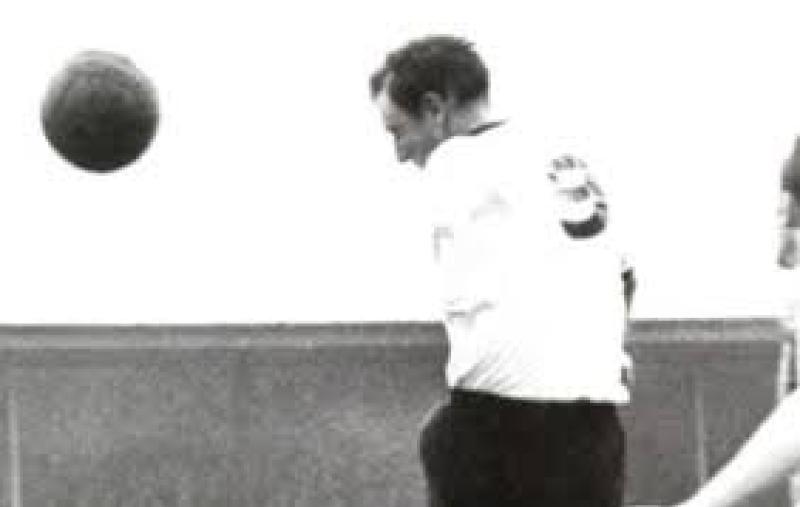 Jimmy Hasty in action for Dundalk

Jimmy Hasty brightened up Oriel Park like no other player back in the 1960s. I never saw him play, but feel that I knew everything about his exploits at Oriel and other pitches throughout the country and on the continent as well.

He was a sensation in Dundalk’s No 9 jersey, not only for his goal-scoring achievements, but also for being able to compete with the best of defenders, even though he was under a huge physical disadvantage.

The Democrat print room was well populated with Oriel Park regulars, and their chat nearly every Monday morning was on Hasty, the goals he had scored and the football he played the day before.

Newspaper reports also kept me well informed. One of the lads, the late and lamented Michael Myers, idolised the centre-forward, to the point where, on football occasions, he was known to have his arm strapped up while togged out in a white-and-black jersey with 9 on its back.

When he was just 14, Belfast-born Hasty lost his left arm in a workplace accident. He was on his first day at a mill in north of the city when the accident occurred. That would have been it for most youngsters, but Hasty wasn’t going to let anything stand in the way of his ambition; he wanted to play football, and that was it.

The Belfast Junior League gave him his first taste of organised football. After that he played with Newry Town, who at the time were contesting the Irish League B Division. He spent two seasons at The Showgrounds, and then, at the age of 22, was signed by Dundalk at the beginning of the 1960/’61 season.

Well, it’s not exactly true to say it was Dundalk who signed him – more committeeman, Jim Malone, working on his own initiative. The story is told in Jim Murphy’s History of Dundalk FC.

“Jim Malone went to see him play in Newry and promptly signed him for Dundalk, without the approval of the Management committee. When he sought approval later in the week, and also told the committee that Jimmy had only one arm, he was greeted with disbelief – a one-armed centre-forward?

“And we have to pay him? To clinch the deal, and as an indication of his certainty of the new man’s prowess, Jim Malone undertook to fund Hasty’s costs and they were proven wrong.”

It didn’t take long for Hasty to show he might be something special. Making his debut in a league game at Oriel Park in front of a bigger than usual crowd, many of them curious to see how a one-armed footballer could compete, the new No 9 scored one of the goals in a 2-2 draw with Cork Celtic.

If Jim Malone – father of current Democrat columnist, Gerry – was feeling just a little smug, who could blame him.

Probably no-one was more impressed with the performance than the Democrat reporter covering the match (almost certainly the legendary Owen B McGahon): “One of the neatest passers of the ball I have ever seen. He controls the ball like a tennis ball and his passes are low – always carpet level – and dead accurate.”

This was only the start. Dundalk netted 21 goals in their next six matches, most of them either scored or made by Hasty. One of the wins was a 4-2 defeat of Shamrock Rovers at Milltown, and the Demo man remained in thrall.

Hasty, he said, had Dublin agog. “General of the attack, holding every ball until his men were in position, he was everywhere, will-o’-the-wisp, so that they never had him covered, and he was in like a flash on every chance.”

Dundalk ended the season with the Leinster Senior Cup and the Top Four competition, but more noteworthy was Hasty’s haul – 18 goals in twenty-matches. He would continue in this vein throughout his six seasons at Oriel, scoring a scarcely believable 35 in ‘63/’64.

This after he had played a pivotal role in the previous season’s League win, which was the forerunner to Dundalk creating history, the first Irish team to win an away match in Europe.

Beaten 3-0 in the home leg of their first European Cup venture, Dundalk shocked the Zurich following when they went two-up in the away fixture. Francie Callan and who else but Hasty were on the mark. A relieved Swiss side scored late on to make it 4-2 overall.

Jimmy Hasty’s last game at Oriel was in the ‘65/’66 season. He had a hugely impressive record – 103 goals from 169 appearances – but more than that, he created a legacy that lives on to this day.

When next Jimmy made the headlines, the accompanying stories were of a kind that shocked not only those that had come to know and love him through football, but people in his native city and throughout the country.

While walking to work in North Belfast in October of 1974, just eight years after severing his links with Dundalk, he was gunned down by the loyalist Protestant Action Force, one of many murder gangs operating in the north at the time.

Like many others who’ve lost a relative, Hasty’s family are today unhappy with the manner in which investigations into his death were carried out. They suspect there may have been collusion (in the murder), and, according to a recent story in The Irish News, have launched legal action against the Ministry of Defence, PSNI and Secretary of State.

A solicitor for the family is quoted as saying, “All the typical features of collusion exist in this sad case, ranging from loss of exhibits through to a basic failure to engage with the next of kin. The killers felt confident to wait at least 15 minutes before the gun attack.”

He added: “The courts offer a final option. Like so many families, their last hope is accessing the courts where there is a fair playing field.”

The number of people who saw Jimmy Hasty play is diminishing, but the stories are still told of how he outwitted the sternest of defenders before angling a shot or a header past the goalie. The hope is his family is as successful in the courts as he was on the pitch.