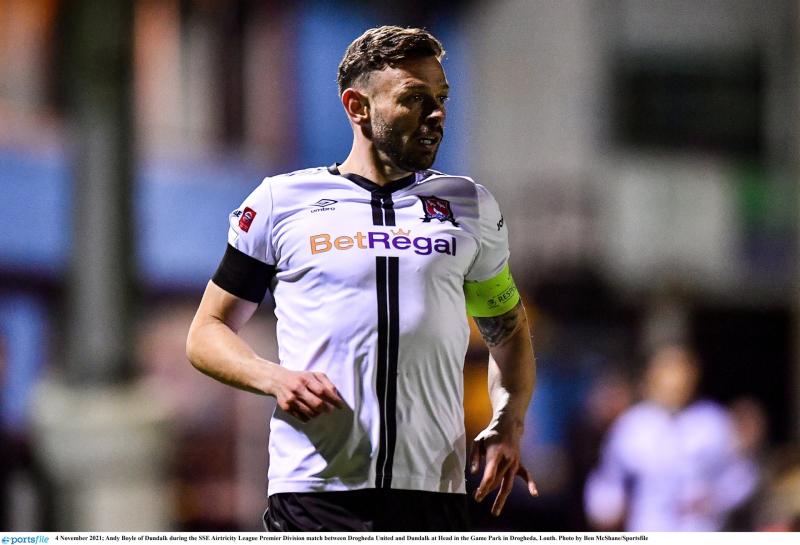 Dundalk FC player of the year Andy Boyle believes The Lilywhites are heading in the right direction following a change of ownership which has seen Peak6 relinquish their control, with a local consortium spearheaded by Fastfix and Statsports now at the helm.

At the time of writing, Boyle is the only senior player under contract ahead of the 2022 season, but the 30-year-old defender believes there will be positive developments before long and has called for patience from supporters in relation to news on player retention.

“I suppose it’s not ideal,” he told The Democrat. “You’d like to know a bit more in terms of who’s going to be about. With the new owners, we’re in good hands now I believe, but they need a bit of time to sort stuff like that out and I’ve no doubt they will.”

Michael Duffy and Patrick McEleney have already agreed pre-contract deals with Derry City – and Will Patching has joined them at the Ryan McBride Brandywell with his signature announced earlier this week.

However, since the change of ownership, there’s been renewed optimism that several players will remain at Oriel, with Greg Sloggett – who is also attracting interest from Derry – and Sean Murray both believed to be favouring another season with Dundalk.

“There could be (a lot of changes),” added Boyle. “It’s obviously the nature of a takeover and it’s the nature of football in general. It’s not ideal. I feel for lads that are basically out of work after tonight. It’s not easy because people have got bills to pay, mortgages to pay and stuff like that.

“It’s just the lack of clarity, but that’s not on the new owners as such now because they’ve only got in the door. From what I’ve been hearing and what’s been said to me, they’re trying to work on that and trying to keep a core of players together.”

Before the 2-1 to defeat to Derry at Oriel last Friday night, Boyle was presented with the club’s player of the year award, but with Dundalk ending the campaign in mid-table, he admits he would have preferred to be lifting the SSE Airtricity League trophy as captain.

“I’m happy with my form. I played for a couple of months through an injury because of the state of play on the pitch and trying to row in for the club and stuff like that. It’s one of them things. I’m happy to get the personal accolade, but I’d rather be picking up a league trophy tonight.”

The Lilywhites ended the season in sixth – their lowest finish since 2012 – in a year that was marred by off-field controversy as a consequence of mismanagement from Peak6.

“It was a difficult season,” reflected Boyle on a turbulent campaign. “It feels like five seasons in one to be honest. It seems a long time ago when we came back in January.

“It’s difficult for me as a contracted player to comment on them, but I think our new owners are definitely going to head in the right direction and we can only give them time. But, looking back on the season, it’s a strange one to say the least.

“The league table doesn’t lie. You finish at the end of the season where you deserve. If you win a league, you say the best team wins the league and it’s no different if you turn out in a relegation play-off.