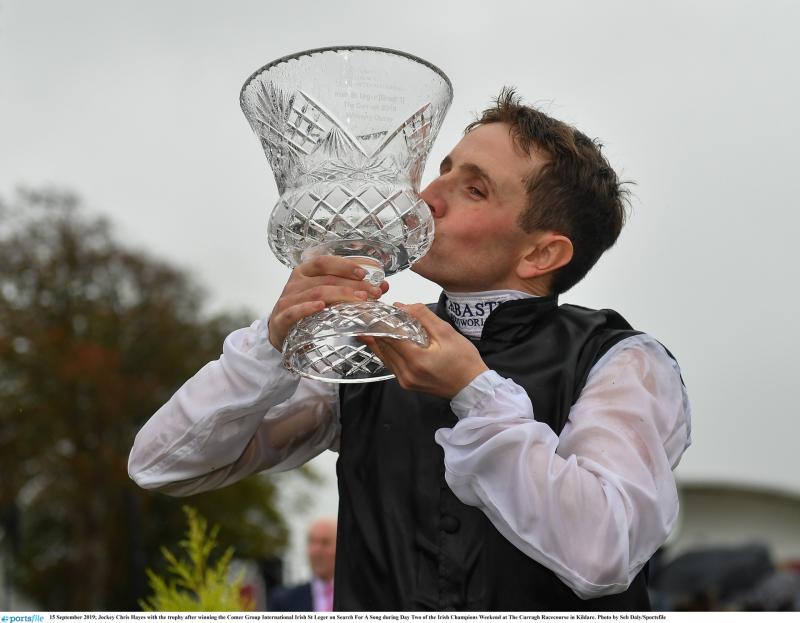 Chris Hayes’ excellent year at Dundalk continued with a double last Friday, which followed on from the treble he rode at the Stadium on Wednesday’s card (November 17th).

Friday’s winners came courtesy of Clueless Hill (14/1) and Scarlet Seymour (22/1) in the two divisions of the Book Online At DundalkStadium.com Handicap.

Chris is very popular with racegoers at Dundalk and, no doubt, his legion of followers will have been in clover following this latest set of results.

His Friday winners are trained and owned by Luke Comer, who is enjoying a good run at Dundalk with five winners since October 29th.

Chris ended the week four ahead of Colin Keane (30-26) in the 2021 Flat Jockeys’ Championship at the Stadium. Colin didn’t leave the track empty-handed on Friday, though, as he won the card’s 12-furlong handicap on Newgirlintown (11/4), who is trained in Kildare by Ger O’Leary.

Friday’s card began with victories for a couple of very promising juveniles. Firstly, In Ecstasy (6/1) stepped up markedly on his unplaced debut run at Gowran Park in September in landing the Irish Stallion Farms EBF colts and geldings maiden in the hands of Dylan Browne McMonagle, and then the heavily-supported Show Of Stars (8/13 fav) created a very good impression when winning the fillies’ maiden in the hands of Billy Lee.

Trained by Joseph O’Brien, In Ecstasy, who had been gelded since his debut run, is a son of top-class sprinter Caravaggio, who also won his maiden at Dundalk, and cost owners White Birch Farm 205,000 guineas as a yearling, the purchase having been made jointly with the famed Demi O’Byrne.

Show Of Stars holds entries for next year’s Irish 1,000 Guineas and Oaks. Winning trainer Paddy Twomey said: “I’d say she’s a nice filly (and) she’s entitled to have good entries. I think she’s good enough to run in stakes company, probably in an Oaks trial rather than a Guineas trial." We shall follow her career with interest.

The biggest-priced winner by far on the card was Mullacash Buzz, whose 66/1 success under Danny Sheehy gave Thomas Dowling his first winner as a trainer with what was remarkably his first runner. Racing in a tongue-tie for the first time, the winner is owned by the trainer’s landlord Martin Flinter.

Thomas said afterwards: “We (I.e. Thomas and his “other half” Nicola) only have seven horses at present (and) are trying to build quality rather than quantity.”

Formerly a National Hunt jockey operating in Britain, this was a great advert for his skills in his new career. He is based in County Wicklow.

Freescape (9/2) improved upon his already-good record at the Stadium when winning the BetVictor Casino Rated Race in the hands of Oisin Orr, who only recently returned from injury.

The David Marnane-trained six year-old has now won four times from nine runs at Dundalk, although this was his first success over Friday’s trip of seven furlongs.

Freescape has spent the last three springs at the Dubai Carnival in Meydan and may well do so again, although a return to Dundalk for a €20,000 handicap over his favoured trip of one mile is under consideration ahead of that possible trip.

You have to feel for Pillar who, having finished second in each of the last two runnings of the Crowne Plaza Leading Jockey & Trainer Championships, looked set to make it third-time lucky only to be collared close home by No Speed Limit (3/1 fav), who was ridden by Wayne Lordan.

To be fair, the Patrick McKenna-trained six year-old had finished second on each of his last two visits to Dundalk so was hardly winning out of turn. He runs in the colours of the trainer’s son, Conor, who won an All-Ireland Football winner’s medal this year with Tyrone and was on hand to lead up his winner tonight.

Record high petrol and diesel prices 'worrying for everyone' - AA