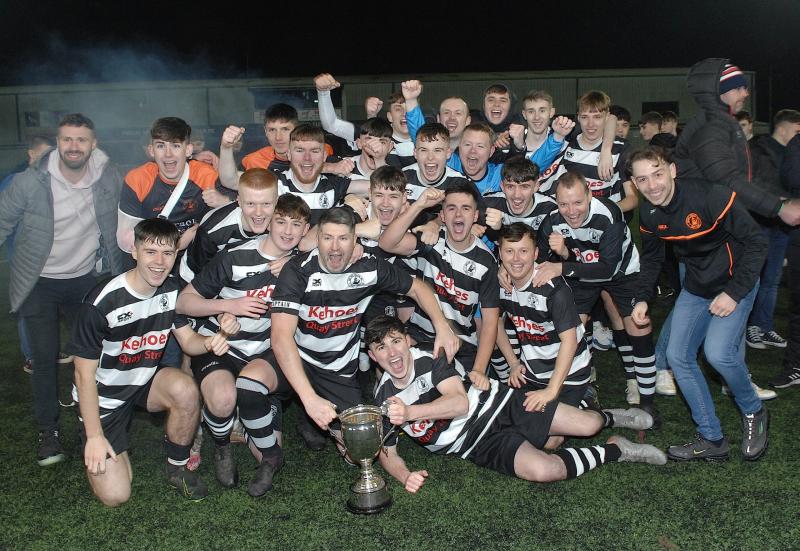 The Point road side dominated from kick off and it was no surprise when Terry Kelly gave them the lead on 15 minutes, flicking the ball over a defender before volleying home from six yards. On 32 minutes Fintan Brady doubled Quays lead with a well taken score.

Despite going the half time with 2-0 lead, the men in black and white continued to boss the midfield, Oisin McCumiskey was outstanding and it was a brilliantly taken goal by the midfielder that put his side in the in the driving seat after 65 minutes.

A couple of flashing shots by Sean O'Connor, who had been moved from defence to attack was all that Bay could manage as the game reached the final minutes. Quay emptied their bench and Francis Quigley McDonald made it 4-0 in the 88th minute.

His goal was quickly followed by Adam Dowling who netted after a mix up in the Bay defence in the second minute of added time. This was Quays biggest ever Cup Final win and in the blue riband competition of the Dundalk and District League.

Bay were without their top scorer William Opoku and his absence was badly felt upfront. Another top player to miss the final through injury was Aaron Mackin, one of Quays top scorers.

Meanwhile the Dundalk and District League Awards were also presented on the pitch at Oriel Park. It really was a night to remember for Taylor Taylor who not only was part of the victorious Quay team but also picked up The Premier Division Player of the Year Award.

Such was the standard in the First Division this year that there was joint winners of that league's Player of the Year, which was awarded to both Rory Kirke of Rock Celtic and James O'Connor Glenmuir Celtic.