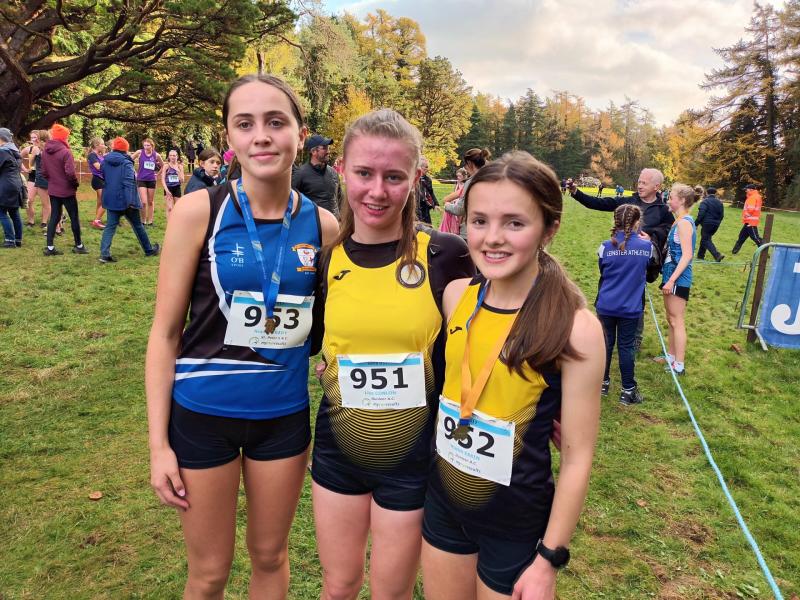 It was a very hilly course but the mild, dry day made it very fast on the downhill sections and all of the Dunleer AC athletes can be proud of their courageous efforts and team performances.

The Championship race of the day goes to Maebh Eakin in the under 17 girls 4000 metre race in 14.55. Maebh was in superb form throughout and gradually eased her way off the front to secure a 40 metre lead over her nearest opponents.

A smooth run from Maebh, showing fantastic strength and fitness to run the uphill finish as strongly as the downhill sections.

This has to be Maebh's best race to date and in such a controlled style that it augurs very well for her upcoming National Cross-Country campaign at under 17 and 18, having won a bronze at the under 18 Provincial level two weeks ago.

Another standout Dunleer performance in Avondale came from Cliodhna Reilly in the under 13 event with a fine bronze to go with the under 12 Leinster title she won two weeks ago.

Cliodhna was with the leading group for the first kilometre, and when the leader pulled away had silver in her sights, but with 50m left to go the young runner seemed to run out of "track" and settled for a very prestigious 3rd place and Leinster individual bronze.

Fiannaith King was the winner of the under 9 non Championship race, making it a double with the under 10 race win two weeks ago. This completed a trio of top-class individual performances from the Dunleer AC girls.

Other Dunleer AC performances which were crucial in securing County medals came from Grace Mc Evoy, Sadhbh Greene and Kelly Sheridan who helped Louth to under 11 County bronze, while Erin Finnegan helped secure County team bronze for the under 15 girls.

In the boys' races Páraic Mathews had a great run to finish in the top 12 to win a non Championship under 9 medal, while Darragh Rooney got the boys' Championships off to a great start with a 9th place to get a top 12 individual Leinster medal and qualification for Nationals.

Cormac Greene, Evan Costello, Max Lavery, Declan McEntee and Nathan Hurry had a fast and furious race pace to deal with in the under 13 Race with one of the biggest fields of runners of the day. All ran very well and gave 100%.

Dáire Mathews, Sam O’Neill and Jack Greene equally gave their all in their demanding under 15 race, while Matthew Fitzpatrick was a top 25 finisher in the under 17 event while also grabbing a bronze medal as part of the successful County team.