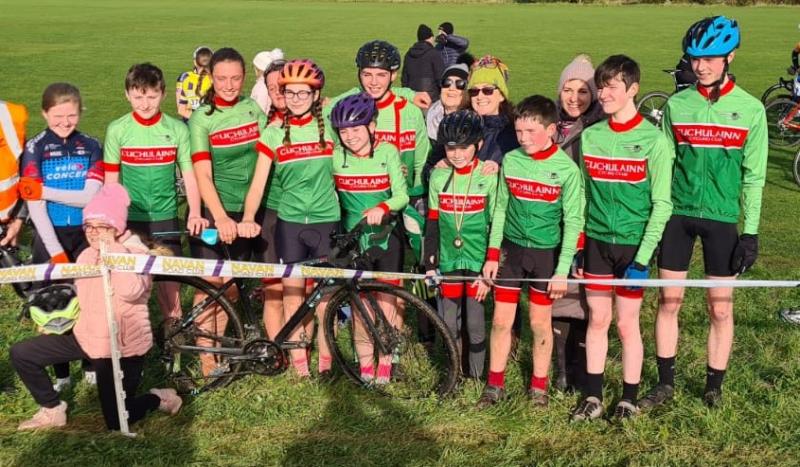 Some of the Underage Cuchulainn riders that competed in Navan

Cuchulainn Cycling club had a very successful day at Round 5 of the Leinster cyclocross league, hosted by Navan Road Club in Black Water Park.

The club had a total of 10 underage riders racing in various categories. First up was the Under 12s where Michael O’Rourke narrowly missed out on a podium position, coming home in 4th, his best result so far this year.

There was a fine display of riders in the U14 race both male and female. Shane Meegan, Sean Delany and Conor Goss all competed in the boys race with Shane securing a 5th place, an impressive feat for the 12 year old.

The biggest success of the day however came from the U14 girls where Ffion Dolan, Holly McCaffrey and Grace O’Rourke dominated the race from start to finish.

This resulted in the young and talented trio placing first, second and third to make it an all Cuchulainn podium in Meath. In the U16 races Callum McCaffrey, AJ Quilton McAreavey, and Callum Goss took part in the boys race.

Callum McCaffrey managed to battle his way up to second place but suffered some bad luck with a puncture in the final lap, yet he still managed to finish with a top 10 position despite having to run the last lap. Meanwhile in the Under 16 girls event, Rhiannon Dolan was 5th.

The club's Cyclocross League is five weeks in and it is the evergreen Johnny McCabe who is currently topping the leader board.

However, he is just a single point clear of underage national champion Connor Murphy. In the underage league, Darragh Murphy from Rostrevor MTB club sits firmly on top with Eoin Davis sitting in second but flying the flag for Cuchulainn is Connor Goss in third.