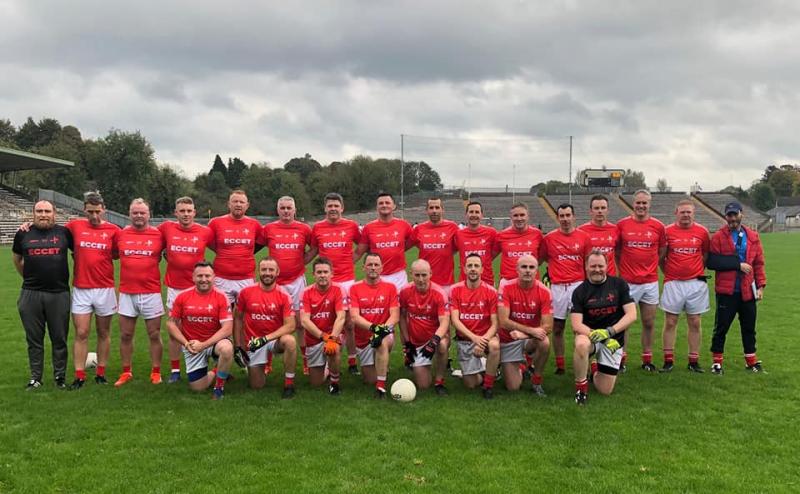 Louth Masters travelled to Clones yesterday to face Tyrone in their All Ireland semi final. Although the squad was somewhat depleted through illness and injury, the mood among the boys was positive and excited.

Tyrone were on the front foot from the throw in but Louth managed to launch a couple of counter attacks of their own to keep Tyrone on their toes. The opening quarter was a tight enough affair but after this Tyrone would get their noses in front when they scored 1-02 without reply in the 2 minutes before the first water break.

The Wee County dug deep and reacted positively to score two breakaway points to Tyrone's for to leave it at 1-09 to 0-03 at half time. From the start of the second half it was a huge defensive effort trying to repel the Tyrone attacks who had willing runners and support from all over the park.

The Louth forwards were getting little supply as the majority of play was in their own half. That said Louth will be unhappy that they didn’t add to their tally having had some good scoring opportunities that would usually have been converted on another day.

At the end of the match every single player had given their all and stood up to a superior and well drilled opponent on the day. The occasion will live long in the memory and the opportunity to play in St. Tiernachs Park against a Tyrone side boasting Stephen O’Neill as well as other ex Tyrone senior players was brilliant.

For a first season foray into the Gaelic Masters, it has been a successful one and credit to every player who togged out during the season. Louth will be back for more in 2022.