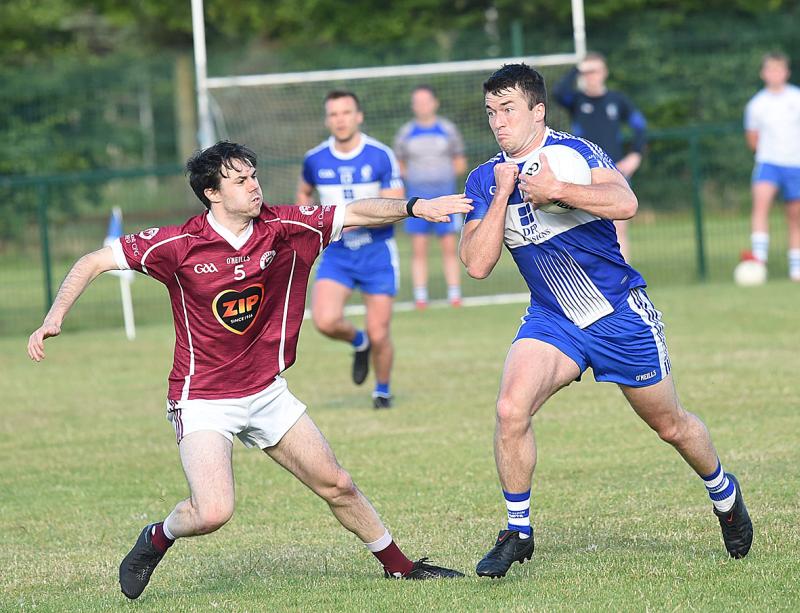 Given the magnitude of this game and what it meant to both sides, not to mention the hazardous conditions, it was all about getting over the line in Darver and vitally maintaining your status at this grade.

In the end it was the Dundalk Gaels who emerged victorious in a victory which means the O’Connells will play in the Intermediate championship next season.

In a game where conditions meant that scores were going to be at a premium, it was the Gaels who managed to scrape their noses in front by 0-4 to 0-3 at half time.

The O’Connells, who played with forwards Paul McKeever and Emmet Byrne in deeper roles, managed to frustrate and suffocate their opponents in that first half as new manager Wayne Kierens set out his stall to contain the Gaels and strike on the brake.

It was the hardworking Emmet Byrne who opened the scoring inside two minutes with a well taken strike, before a Jackie Agnew free gave them a two-point lead after five minutes.

Having been turned over 14 times in the first half, the Gaels finally got on the board through the boot of Derek Crilly, before Luke Murray levelled things up for Malcolm McDonnell’s side in this scrappy and tense affair.

Jackie Agnew’s gorgeous kick with the outside of his boot from distance was the score of the match and it gave the Castlebellingham outfit the lead at the first half water break by 0-3 to 0-2.

There were only two more scores in that half, both coming from the Gaels as Crilly and a Dylan McKeown free gave them the lead at half time. Youngster Dylan McKeown’s battle with experienced full back Conor Byrne was also an intriguing watch in that opening half.

The second half saw McKeown moved to the centre half forward position and Barry Watters moved to the inside line as the Gaels tried to up the ante.

The O’Connells looked like they could possibly pull off a shock of some sorts as excellent strikes from Stuart Osborne and Stuart Reynolds (f), put their side ahead at 0-5 to 0-4, six minutes after the restart.

But the O’Connells failed to score for the next 25 minutes as the Gaels just managed to register enough scores to establish a significant lead.

They stepped things up on the O’Connells kickouts, winning five of their 13 restarts in that half. Contrastingly they had won all 11 of their kickouts in the first half.

Sean Murray saw plenty of the ball at this point, finishing with 33 possessions over the hour, with half backs Jason Clarke and David McComish having 22 touches each.

Gerard McSorley also made his mark in that second half with three crucial scores. The first of these white flags levelled things up for the Gaels, before Barry Watters swivelled to kick over the lead score for the Dundalk side.

Dylan McKeown has been a real bright spark for the Gaels this season, and he kicked two further frees either side of a brace of Gerard McSorley points to give the Gaels a four-point buffer with seven minutes remaining.

McSorley then broke free of the O’Connells cover, his shot rattled the crossbar before the ball fell to that man Dylan McKeown who slotted the ball home to all but seal the Gael’s victory at 1-9 to 0-5.

Another McKeown free concluded the scoring for the winners and despite the O’Connells ending their 25-minute wait for a score through Dean Standfield, the Gaels deservedly emerged victorious to retain their Joe Ward status.

Gerry Malone's thoughts on the Bohs game, current LOI facility and a recent trip to Warrenpoint
ADVERTISEMENT - CONTINUE READING BELOW