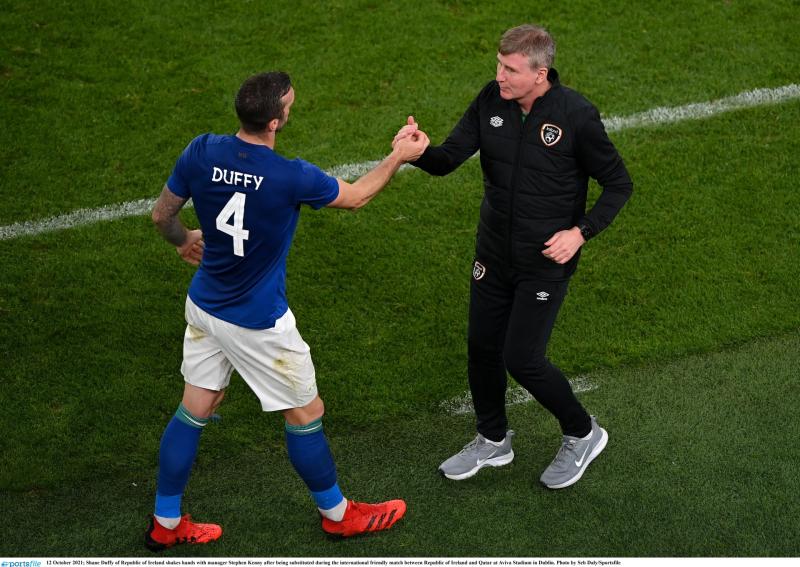 Just like Ger Lyons has gotten the best out of Colin Keane in a fruitful partnership in the world of horse racing that has worked well for each other, benefitting from their talent but more especially their loyalty to each other, Stephen Kenny and Shane Duffy would have to be happy with the way in which things are now unfolding for them.

It was good for neither of them until recently. Hard as he tried, Kenny simply couldn’t find a winning formula with his Republic of Ireland team. There were friendlies, Nations League matches and the crucially important World Cup qualifiers – none of them finished with Ireland showing up on the right side of the scoreline.

Covid-19 was a serious intervention, reserving a more unkindly cut for the panel Kenny was trying to mould into a winning combination than any other. In an effort to give a boost to his flagging fortunes at international and club level, Duffy headed to Celtic last season on loan from Brighton.

Good as they were when playing on the other side of the Pennines, neither of the Keanes, Rob or Roy, quite hit it off in the famous hooped jersey. It didn’t happen for Shane Duffy either, and after a most frustrating spell, he was back among the Seagulls, hoping to revive his club career.

If his recent outings with the Republic are the criteria, Duffy will be one of the first men Graham Potter pencils in each week as Brighton continue their bid to stay among the Premier League’s elite. And he’s certain to be at the heart of Stephen Kenny’s defense for the remaining World Cup qualifiers.

Derry-born Duffy has established himself as a pivotal figure in the most-times green jersey, repaying Kenny for keeping him on board. And he’s scoring goals. Ireland may be out of the running for a trip to Qatar, but there’s an importance attached to the remaining qualifying matches, not least for the team manager.

Kenny’s contract is up next summer, but the chances of it being extended or renewed will be greatly enhanced if between now and then there are wins to follow the couple of recent weeks. Claiming Portugal’s scalp in a few weeks’ time would be valuable for team and in particular the management.

Jack Charlton had a gospel, labelled the ‘long ball’. Kenny has, you could say, a more sophisticated approach; but until recent weeks, observers - recent year internationals chief among them - weren’t buying into it.

Nothing would probably please the former Dundalk supremo more than be able to say to the likes of Richard Dunne and Tony Cascarino, “Well, what have you got to say for yourself, now?”