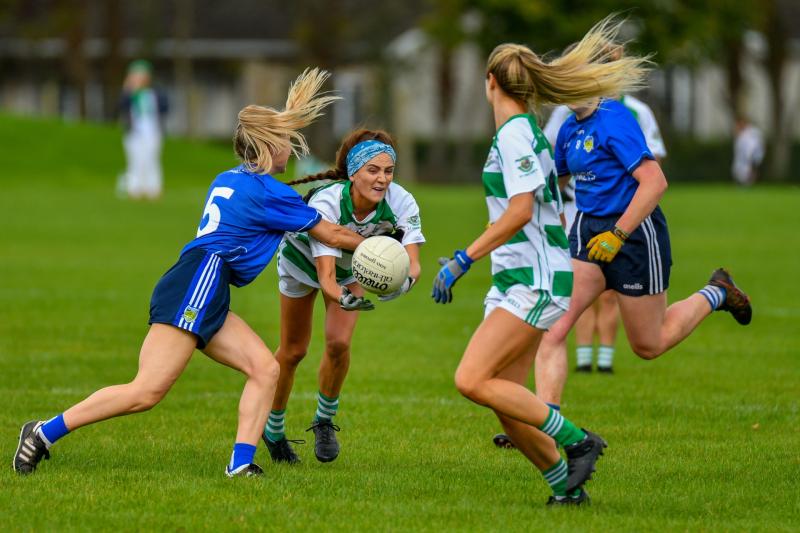 In a very tight affair St Fechins ladies have earned their place in their first Senior Championship final following a two point win over Roche Emmets.

Roche opened the scoring with two over the bar, one from a free. Following two wides it was the fifth minute before Shayleen McDonagh got the Fechins first point. Roche added another score from a free before Rachael Kinch threaded the eye of the needle to find the corner of the net to put Fechins one ahead.

This lead was short lived as Roche immediately answered with a goal of their own. Rachael again found herself one on one with the keeper and got the Fechins second goal of the half on the 13th minute.

With the bit between their teeth Roche showed why they were in the Semi final as they took over the scoring, adding two goals and three points to take them up to the break.

Fechins continued to find it hard to find their accuracy and continued to clock up wides, but a point from Ceire Nolan and an excellent goal from Ava Briscoe in the dying seconds of the first half left them only four behind at the half way mark, 3-2 to 3-6.

The second half opened with two wides from play from the home side but after being taken down in the small square Ava Briscoe expertly found the back of the net from the penalty spot.

The Fechins then came into their own and showed the large crowd exactly what they are capable of, with points coming from Briscoe (2), along with one each from Catherine McGlew and Sara Moore as the half approached the 20th minute.

Roche got their only point of the half from a free in the 26th minute and that was the final score of the game. There was a great battle in the remaining minutes as they continued to put pressure on the Fechins back line but they held firm to come away with a two point win.

Roche will be very disappointed they didn’t capitalise on their first half lead but losing two players to yellow cards didn’t help their cause. St Fechins will now look forward to the final against Geraldines on Sunday next along with the men’s team who are also in Championship final action.