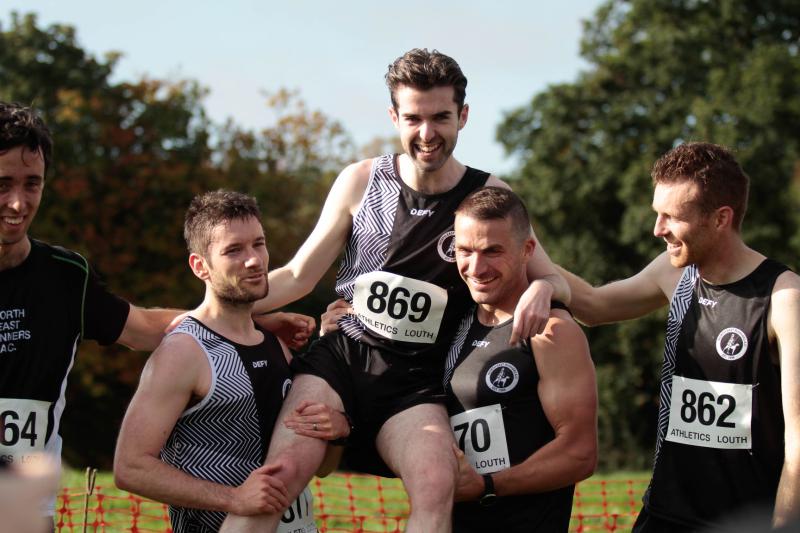 The second day of cross-country competition at Bellurgan Park was an overwhelming successful one for the North East Runners Athletic Club who swept the boards for the mens and ladies races, taking Gold for both teams and first place podium finishes.

The morning kicked off with the ladies 4km race and very early on, a breakaway group of four emerged with two NER athletes, Laura O’Driscoll and Kelly Breen settling in nicely in the lead.

The uneven footing and wet grass did not deter the ladies as the pace was increased and Laura showed her years of experience mountain running and kicked into a strong lead to power home in first place as Intermediate Champion.

Kelly had a hard battle with Drogheda & District athlete Maureen Harbison, as they were shoulder to shoulder coming into the last kilometre. Having placed third the previous week in Novice company, Kelly carefully planned her final move into the lead and stormed into the home stretch to second place.

Not long after did the club see AnnMarie Duffy charging up the steep hills and leaving her competitors behind to finish 5th with Claire Smyth following her teammate in 6th.

Next in the black and white was Patricia Mulholland (12th) and Aine Ní Mhurchú (15th) with a final attack, placing ahead of three more athletes and finishing ahead of Drogheda’s fourth team member to ensure the Gold wet to the North East Runners for the second week running.

The Men’s race was ready to begin with a gruelling 8km course. A fast pace was set immediately as the whistle went, pushed by Drogheda and District athlete Colin Leonard and he showed no signs of relenting as Rory Mulholland chased him down.

He knew he needed to edge closer if he wanted a chance at gold and coming into the final lap with 1500 meters to go, he decided to chance his fate and pushed into the lead. This was a brave move as it was a long way to go until the finish line was in sight.

The crowds were waiting for a response from Leonard, but he could not get into Mulholland’s reach as he fought up the back hill to keep his lead. With 500 meters to go, Mulholland had a satisfying gap as he looked over his shoulder with a smile and powered into the home stretch as Intermediate Champion.

There was lots of movement and changes in the chasing pack where Liam Fergus and Keith Geoghegan battled for the final podium position against Drogheda’s Tadgh Everitt Thompson, finishing in 4th and 5th respectively.

Just like last week’s Novice race, more black and white singlets made their way into the finish with Garry Mulligan (6th), Paddy McSorely (7th) and Oisin Hughes (8th). There was no doubt that team Gold was set for the North East Runners with six men in the top eight.

The final race in the Louth Cross Country Series will be the Senior Championships held on Sunday 31st October in DKIT.