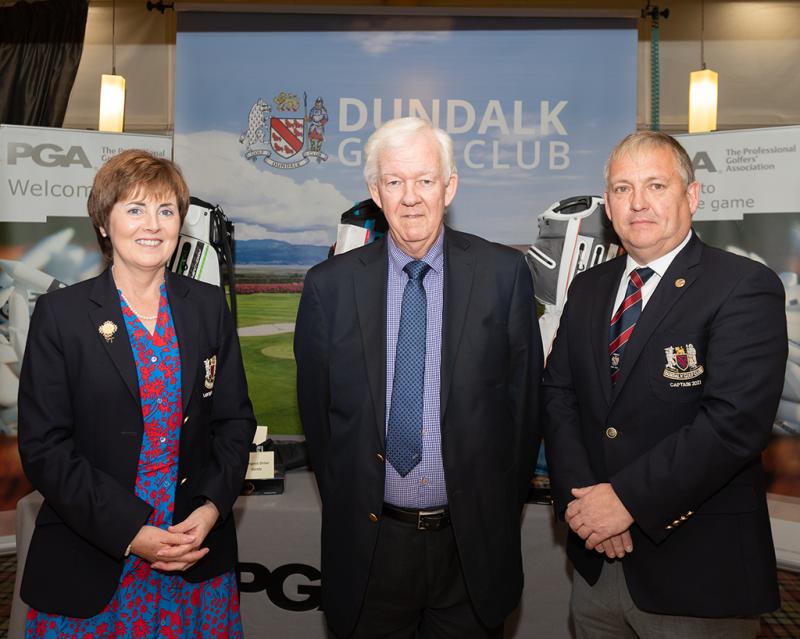 A who’s who of Irish professional golf professionals, plus friends and associates accumulated during his 35 years of service, were in Dundalk Golf Club recently as The PGA in Ireland came together to give Michael McCumiskey a memorable send-off following his recent retirement.

McCumiskey retired in May and the occasion was marked by a pro-am and dinner organised by Dundalk Golf Club where The PGA in Ireland has been headquartered for all but one year of his time in the role.

“I was appointed in 1986 and we moved to Dundalk in the following year,” McCumiskey recalled.

“It’s been a really happy marriage. We’ve promoted the club whenever possible, held events there and had a great relationship with all the managers.”

The latest, John O’Sullivan, was the driving force behind the day that celebrated the long-serving PGA in Ireland manager’s retirement and his dedicated service.

“I told John when I was due to retire and he immediately said there should be an event at the club to mark it,” McCumiskey explained.

“Not only did he talk about it, he got the club to approve the staging of the event. Then he worked tirelessly to get sponsors for the day and make it the huge success it was.”

The event also celebrated the long association between Dundalk Golf Club and The PGA in Ireland and Conor Dillon, McCumiskey’s successor, added: “They over-delivered on the event and supported it exceptionally well. The weather was good, the field was over-subscribed and Michael was given the perfect send-off.”

Forty amateur teams from across Ireland lined up alongside the 40 professionals for the Michael McCumiskey Testimonial Pro-Am which, at Michael’s request, was a fund-raiser for the PGA Benevolent Fund.

The golf was followed by a presentation dinner with tributes being paid to Michael’s contribution to Irish professional golf by Dundalk Golf Club’s captain, Trevor Giff, The PGA in Ireland Captain, Michael Kavanagh, and PGA Chief Executive Robert Maxfield.

The PGA in Ireland Chairman, Gary Chambers, presented a commemorative Galway Crystal plate, donated by the country’s PGA Members, to Michael in recognition of his 35 years service.

Reflecting on McCumiskey’s work for The PGA in Ireland and the Association, PGA Chief Executive Robert Maxfield said: “It’s testament to the high esteem in which Michael is held in Ireland that today’s event has been so well-supported.

“That esteem is the result of the 35 years of dedicated, exemplary and loyal service he has given The PGA in Ireland’s Members and the Association. I thank him for his invaluable contribution and wish him a long, happy, healthy and well-deserved retirement.”