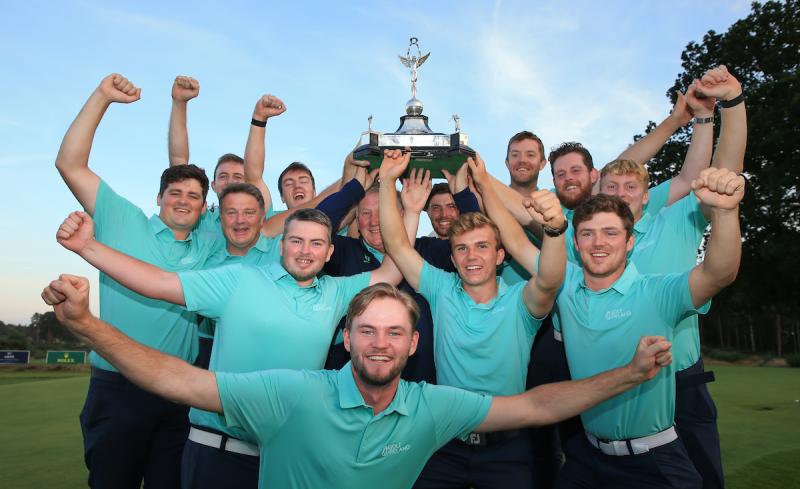 Caolan Rafferty helped Ireland win the Home Internationals for the 19th time, and the first since 2017, at Hankley Common Golf Club in England last week.

The Dundalk Golf Club player contributed 2.5 points out of a possible five in the matches against Scotland, Wales and England as Ireland beat Scotland and Wales and then drew with England to pip the Scots for the title by half-a-point.

“I made my debut in the Home Internationals back in 2017 when we last won and this was my fourth Homes so it was a nice feeling to claim it back for Ireland. Playing for you country is special, but winning for your country is even better,” said Rafferty.

The 28-year-old headed to England full of expectation after an excellent performance in the One Finance sponsored Dundalk Scratch Cup where he was beaten in a play-off by Ireland team-mate Jack McDonnell after both had finished the 36-hole event on seven under par.

“I was looking forward to the Home Internationals after playing nicely on Sunday. It would have been nice to win the Scratch Cup but being in contention again was nice.”

However, The Louth Golfer was quickly brought down to earth when the Championship started against Scotland. Although Ireland won 8.5 to 6.5, Rafferty and Marc Boucher were beaten 2&1 in the foursomes and Rafferty lost 7&6 to Andrew Ni in the singles.

“In the morning myself and Marc Bouchar struggled to gel early on and we were just a bit off for some reason. We were four down with six to play but got it together, won 13 and 14, and made a push for it at the end, but just had too much to do.

“In the evening I didn't play bad at all. I got caught up in the heather a couple of times which led to three bogeys. But the chap I played had a good day and made a heap of birdies which made the scoreline look worse than it actually was.”

Despite being the team’s most experienced player, Rafferty was dropped for the morning foursomes against Wales and admitted it was a blow.

“Yes, it was a tough one to take and, after being beaten the day before, it knocked the stuffing out of me. But I had to pull it together and be there for the lads because, at the end of the day, it's a team competition.

"I was the team advisor that morning which meant I could help the lads out with shots and chat to them along the fairway so that passed the morning for me.”

“It's a role I was asked would I take up this week. Colm Campbell used to be always there so it's a position that the Irish set-up really focuses on. Obviously, apart from the first day, it paid off in our favour and it was nice to have that trust placed in you to fill such an important position.”

Rafferty was never behind in his match against Matthews with his third birdie of the round closing it out on the 16th.

“It was nice to have a good win alright. It picked me up a little after the day before and the disappointment of being dropped too.”

With Scotland beating England it meant Ireland only need a draw against the defending champions to take the title and deny the English a clean sweep as they had already won the Senior Men’s, Women’s, Boys and Girls Home Internationals.

“We all fancied our chances of winning the match. We are a strong team which got on very well together and each player wanted to win a point for the next man so it was a great team to be part of.”

Things did not look good after the morning foursomes as England led 4-1, winning three of the five matches and halving the other two. Rafferty, playing with Sligo’s TJ Ford, got one of those half points despite never being in front against the English pairing of Jack Bigham and Josh Hill and being two down with three to play.

“We were up against it all day and a few missed chances left us with a lot of work to do. On 16 TJ hit a great shot into about 10-12 feet and I held it for birdie. I had just missed a short one on the hole before, so I was making sure I made up for it.”

The 17th was halved with birdies and the Irish came away with a vital point when the English conceded after a dramatic final hole.

“The 18th was a disaster for both sides but we just had a bit less of a nightmare. We had 12 feet for par after a wild tee shot and luckily enough for us the English lads hit a worse tee shot and made a six.”

The Irish faced an uphill battle in the afternoon singles, but they dug deep and rallied and won the session by 6.5 to 3.5 with Rafferty’s 8&7 demolition of the current British Amateur Champion, Laird Shepherd, the undoubted highlight as it showed the most unlikely of comebacks was possible.

He bossed the match from the first hole and won every hole on the front nine to be nine up at the turn. Although he lost the 10th to a birdie, he halved the 11th in par to seal a remarkable victory.

“The first 9 holes were a bit mad. If he made a mistake, I was putting it in the right position to punish him and then, when he was in position, I made birdie and he didn't. It was a bit surreal if I'm honest because I've never been in that position before.”