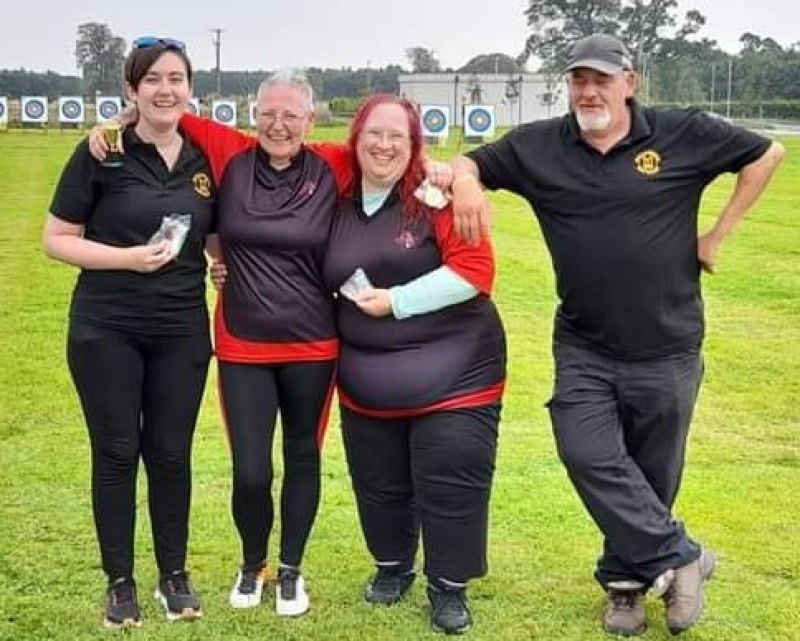 Cuchulainn Archers have made it back out for competitive archery for the first time since Lockdown in March 2020. Millenium Archers borrowed eight target butts from Cuchulainn which were taken to Sports HQ at Blanchardstown for the Outdoor Nationals.

Due to Covid restrictions the shoot was shortened to one day for Compound shooters and one day for Barebow and Recurve. Therefore, the majority of the team shot on Saturday with just three on the field on Sunday.

Bow fitness was down due to lack of training distances at home for the majority of competitors and with the "field" being turned 90 degrees to accommodate more archers to allow for restrictions, the sun and the wind didn't help the situation.

With the sun now shining in eyes and the wind whipping around the trees to the left of the field, this greatly affected arrow flight by causing wind at the target area that wasn't always felt from the shooting line.

With what some felt were disappointing scores compared to previous years, hearts were uplifted by the sheer joy of being back in the game, back on the field and back competing.

On Saturday, the clubs only female on the field was Shona Judge shooting compound and bringing home Gold and a trophy.

In the senior men’s compound, Eamonn Rogers took 4th in the qualifiers but was knocked out in the Head to Heads.  Kevin Donnelly made his debut on the Outdoor Target range and put in a very decent score having only joined the club shortly before lockdown.

In the Master compound category (over 50) Fiachra Judge was leading the club with 5th place in the qualifiers with John Keenan and Christy Banks were not far behind but it was Christy who maintained the flow in the Head to Heads and came a very decent 4th place having taken on several Head to Head matches.

The following day Brendan Forde took on the Senior Gents Recurve. A notoriously large group of archers, it can take numerous Head to Head challenges to whittle the numbers down and Brendan fought well to stay on the field and only just lost out on a Bronze place by two points.

In the female barebow category, a now growing number of ladies took on the challenge of 50m. Two Cuchulainn ladies, Claudia Heinze and Ann Marie (Smiler) Murray beat the field to end up in the Gold/Silver Head to head.

It was a very tight match and went down to the last three arrows to decide the placing with Claudia taking 2nd and Ann Marie just pipping the post for Gold. Congratulations to Ann Marie who also set four new Irish records.

Terms and conditions for Louth's Next Superstar talent competition