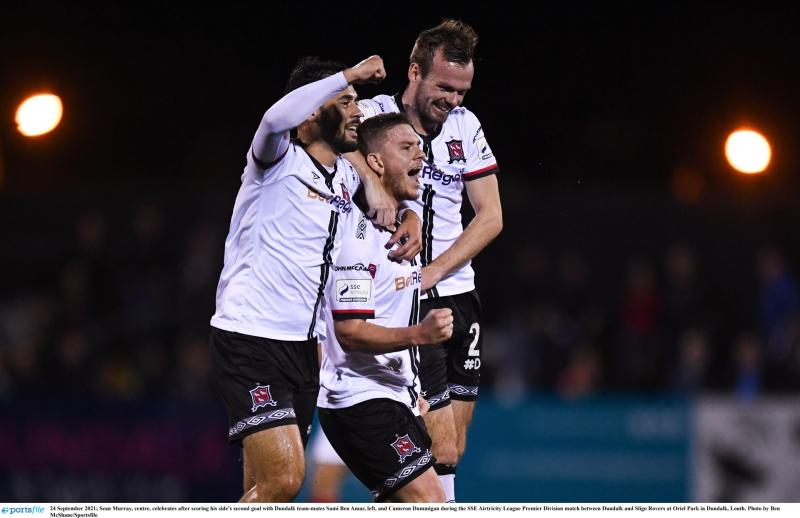 Dundalk FC have returned to winning ways in the SSE Airtricity League after beating Sligo Rovers 4-1 at Oriel Park, but wins for both Finn Harps and Waterford tonight means The Lilywhites remain second from bottom with only nine fixtures remaining.

After what was an uneventful opening period, Dundalk put themselves in front on 12 minutes when Sami Ben Amar’s left-field cross somehow found its way to Sean Murray, who got ahead of John Mahon before finding the net with a delightful side-foot finish.

However, that lead lasted just two minutes when Niall Morahan’s ball from midfield was excellently controlled by 18-year-old wonderkid Johnny Kenny, who impressively held off the challenge of Raivis Jurkovskis before slotting beyond the grasp of Peter Cherrie.

Dundalk restored their advantage on 20 minutes when Patrick Hoban’s initial close-range attempt was blocked out by Lewis Banks, but only into the path of Murray, who had all the time in the world before firing past Ed McGinty and several Sligo defenders.

The Lilywhites looked comfortable throughout the remainder of the first half without creating anything noteworthy, although Han Jeong-Woo did fire over from a tight angle; while Daniel Cleary headed off target after getting on the end of a good Murray delivery.

Dundalk really should have added to their lead on 62 minutes when Hoban – in what looked a lost cause – brilliantly held off the challenge of Mahon before slipping Michael Duffy through on goal, but McGinty was equal to the effort, crucially saving with his feet.

Much to the delight to the vociferous Oriel crowd, a third goal did arrive just a minute later when Cleary’s wayward pass was kept in by Duffy, and his low cross from the left was turned home by Hoban, although Mahon could well have gotten the final touch on it.

Dundalk added a fourth deep in stoppage-time when Duffy took it past Colm Horgan before playing it out to Hoban, who took a touch before beating the despairing McGinty.