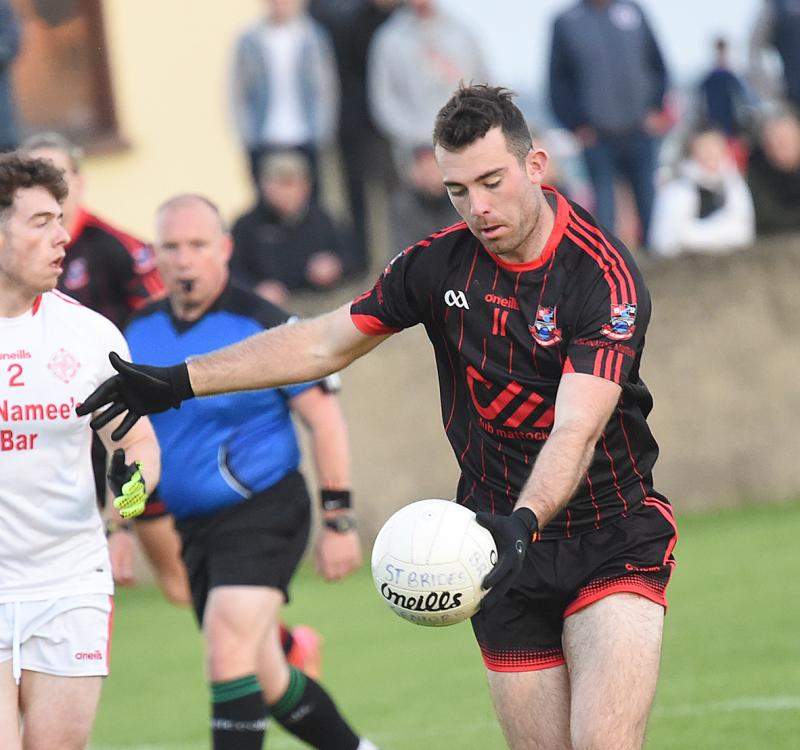 Mattock Rangers had to withstand a St Brides rally late in the second half in the battle of the two most recent Intermediate champions at Stabannon on Sunday night in Group C.

The tussle brought the Senior Championship Sunday to a fitting close as the contest was an entertaining affair under the floodlight skies of mid Louth.

Mattock held firm after opening up a 0-12 to 0-1 11 point lead early in the second half. Cathal Fleming’s reputation is growing by the week for the Collon men. The midfielder would close out the game with three points in the final quarter.

The youngster showed leadership beyond his years as he finished the game with seven points for the high scoring Mattock men who secured their place in the quarter finals.

St Brides were making their return to the senior championship for the first time in 11 seasons and it would be evergreen Aaron Hoey who would play like he never left, landing four trademark left footed points for the losing side.

Paddy Reilly gave Declan McCoy’s side the best possible start with a quick score directly from the throw-in. McCoy had to do without the services of county forward Seán Marry as well as influential defensive duo Andrew Smyth and Ronan Bailey on the night. The latter pulled up lame as late as the warm up before the game.

Mattock showed all their attacking potential with eight unanswered scores to lead 0-8 to 0-1 at the break. Aaron O’Brien pointed half of their first period total with Shane Hickey and Fleming also getting in on the act along with the evergreen Adrian Reid.

St. Brides went for broke at the start of the second half taking off their sweeper Laurence Steen in favour of Emmett Kirk and the aforementioned Aaron Hoey.

The gamble did eventually pay off by getting the Brides back in the game but not before Mattock rattled off four further points. Fleming and Ben Watters scoring a brace apiece.

Forty minutes after their first score Hoey landed a quick brace, the Knockbridge men upped the gears and continued to rely on the trusted tactic that bore fruit the season before. Pumping direct ball on top of talisman Paddy Reilly at full forward.

Ciarán Deane found the net as a direct result and Emmet Kirk fired over a determined brace and suddenly the gap was down to four points.

Mattock held firm thanks to the experienced Daire Englishby who marshalled Hoey to perfection just when momentum looked to be slipping away for Wayne McKeever’s side. Shane Hickey countered along with Fleming to see Mattock over the line.

St. Brides will be the better for the 60 plus minutes of Senior Championship action and face a struggling O’Connell’s side at the same venue this Sunday with a quarter final place on the line.

The Graham Norton Show is back! Here's the guests for tonight's season premiere on BBC One