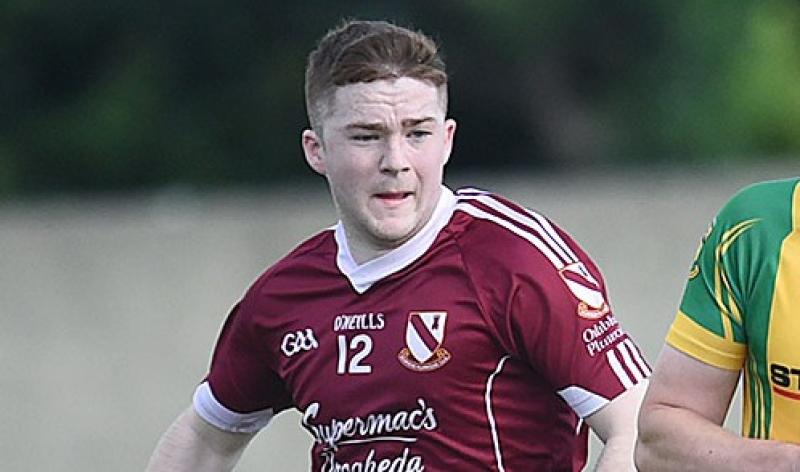 Having narrowly staved off relegation from the Intermediate grade a year ago, St Oliver Plunketts became the first team to advance to the knockout stages thanks to victory over a gallant Naomh Fionnbarra side in Group D.

However, the men from Togher will undoubtedly reflect on several goal chances that went abegging over the hour, with Plunketts keeper Luke Haggins in imperious form, denying Conor Osbourne and tipping a Kalum Regan effort over the bar to ensure the Drogheda side’s passage out of this group.

With both sides guilty of some sloppy use of possession and turnovers, scores were at a premium early doors. The Plunketts’ Cian Brady’s early score cancelled out by the ubiquitous Padraig Butterly, before Butterly’s long ball into the square was punched over the bar by Michael McArdle to put the Barrs ahead.

Conor Early, who finished with 15 possessions over the hour in a hugely influential performance, set up Niall Murtagh to equalise before scores from Sean Callaghan and David Lambe put Thoss Byrne’s charges 0-4 to 0-2 ahead as both sides went in for the water break.

Despite having goal on his mind, Osbourne fired his shot over the bar as another Cian Brady strike had the Plunketts ahead by 0-5 to 0-4 after 19 minutes.

Another Thomas McCreesh free levelled the scores once again, but two late points from Conor Early including a sublime long range free kick put the Plunketts ahead by 0-7 to 0-5 at half time.

Just after the restart, Naomh Fionnbarra’s Stephen O’Reilly saw his attempt at a point parried down into the large rectangle by Luke Haggins. With the ball arriving at an awkward bounce, Naomh Fionnbarra’s Conor Osbourne could not get a proper connection on his volley, which flew wide.

Despite losing John Doyle to a black card just before the break and Patrick McGrane to injury in the first half, Naomh Fionnbarra gallantly stayed in the contest, winning eight of their nine second half kickouts with Martin Murphy and Hugh McGrane battling hard for the Togher cause.

Thomas McCreesh traded scores with Cian Brady with the gap continuing to stay small between the sides. Stephen O’Reilly who was always willing to drive at the Plunketts defence when on the ball, picked out Michael McArdle with a precise kick pass, McArdle then laid it off to the onrushing Conor Osbourne but Luke Haggins heroically parried away his goal bound effort.

Conor Early continued to find the range with back-to-back white flags to stretch his side’s lead to four points with nine minutes remaining. Haggins tipped Togher’s Kalum Regan’s effort over the bar before the Plunketts pressed home for victory and ultimately a place in the IFC quarter finals with late scores from the lively Cian Brady (0-2) and that man Conor Early.