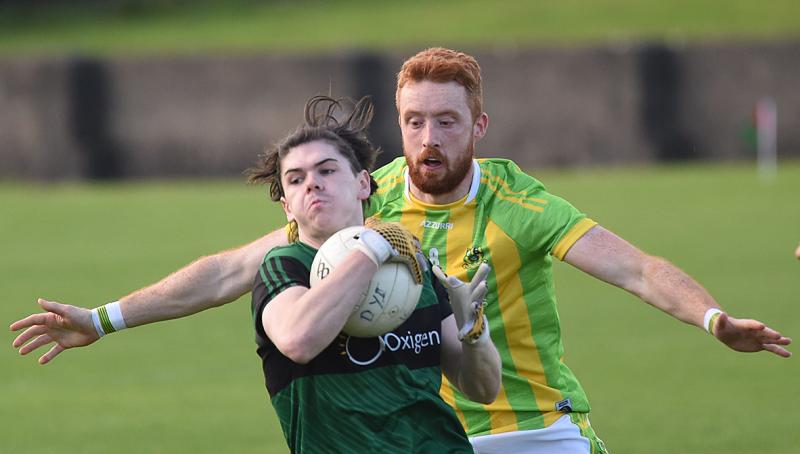 Dundalk Young Irelands made it two wins from two in Group B and thusly booked their place in the Intermediate Championship Quarter finals with a polished display against local rivals Clan Na Gael who will rue their missed opportunities.

The Clans were behind throughout the contest but kept their Town rivals in their crosshairs for much of the match, but despite having plenty of possession their nine wides meant they could never reel them in as goals in either half from Peter McStravick and Dean Maguire sealed a valuable win.

It was the Ecco Road men that got the scoring underway on four minutes, Paul Crewe did well to get away from his marker before teeing up Gavan Gaffey. However even at this early stage, shooting was costing them with three wides recorded in the opening ten minutes.

For contrast the more efficient Young Irelands only had four wides in the match, it was them who took control of the contest from here. Peter McStravick was in fine form throughout and bagged two monster frees from near his own halfway line to take the lead by the ninth minute.

He alongside Jordan O’Donoghue were playing havoc with the Clans defence, their pinpoint passing and speedy runs being a threat they could never really come to terms with. A third point from Cathal Ferriter had the Irelanders 0-3 to 0-1 in front by the first water break.

The Gaels to their credit came out of this stoppage strong, despite plenty of pressure Shane Carroll was able to weave his way around the danger and point to bring it back to a one score game. That was to be their last point of the half.

Deep into injury time came the game’s first goal, McStravick soloed forward before losing his balance yet remarkably still got his shot off. Cillian Rice in the goals had no chance as this bullet flew past him. Young Irelanders taking a 1-5 to 0-3 advantage into the break.

The third quarter was the most even of the contest, both sides going score for score in an evenly matched 15 minutes, yet one extra score just before the water break from McStravick extended his sides lead to 1-9 to 0-6.

The Clans restarted proceedings with purpose, two scores in 90 seconds from Conall McKeever and Robert Curran giving their fans hope of a possible comeback.

All those hopes were dashed with the double whammy of another Irelanders’ goal coupled with Shane Carroll’s sending off within 60 seconds of that green flag being raised.

A quick team move eventually led to Dean Maguire getting free of the shackles of the Clans defence, he duly rounded the keeper and slotted it home with ease while Carroll was soon after given his marching orders for an incident off the ball with Jordan O’Donoghue with just five minutes left.

Three points in a row extended their lead before a late consolation goal from Robert Curran, the Clans now facing into a winner takes all clash with St Kevins in Stabannon this Saturday.

Questions raised whether or not N52 Ardee Bypass will be built, despite €8.1m being spent on the project