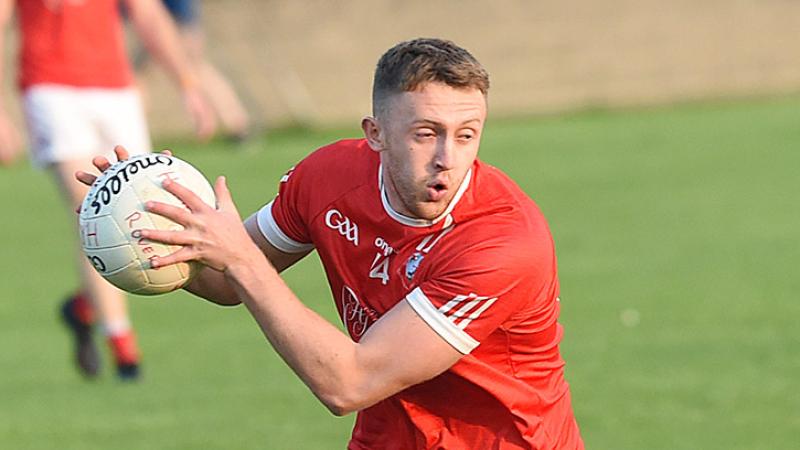 Hunterstown Rover's Ryan Burns bagged nine points as his side booked their place in the quarter finals of the Intermediate Championship. (Pic: Arthur Kinahan)

Hunterstown Rovers maintained their unbeaten record so far in Group C to secure a place in the quarter finals as group winners after an impressive showing against O’Raghallaigh’s in Dunleer on Saturday afternoon.

A startling blitz after half time was where the game was won for Peter Dooley’s men, who reeled off 1-4 to no reply as Rovers upped it to an intensity that the Drogheda side simply had no match for. Dean Burns again popped up for another crucial goal in their victory.

Last year’s Louth minor forward Kyle McElroy caught the eye early on in this entertaining affair. With Hunterstown’s defensive focus on talisman Ben Rogan, McElroy gladly floated around the extra space and had a great battle with his marker Euan Woodlock before Martin Lennon was switched on to him.

McElroy would indeed land the first point of the game when taking an excellent mark. Ruairi Moore was excelling at centre forward picking up a lot of possession for the Drogheda men.

Moore landed the first of his four first half points in a period which was all green and white, while John Horan quickly added another.

Similar to last week, Hunterstown hung on in the game thanks to perseverance and engineering a goal against the run of play. Jamie Ward played several give and gos with Glen Matthews first and then Dean Burns before blasting to the net in the seventh minute.

In response Moore then proceeded to kick two gorgeous efforts in a row to maintain dominance on the field as well as the scoreboard. Ryan Burns was living off scraps to good effect, keeping his side in front.

Niall Flynn’s side then opened up through Ben Rogan coming to life. John Horan finished off a move before the first half water break, Rogan tapped one over himself before McElroy landed a 45’.

Burns cut the gap to two with a splendid use of the mark that ended the half to make it 1-8 to 1-6 in the O’Raghallaigh’s favour.

With a noticeable shift in the intensity in their play, Rovers came out determined in the tackle and a with a directness up front. Davy Finn covered every blade of grass but his score ignited the run of scores that was to come.

Paul Carrie clipped over two points in this winning sequence for the mid Louth men. However, Dean Burns' goal would be the clincher. Burns ran along the end line before burying low past Joe Flanagan at the near post.

From two points down to five in front, Hunterstown then managed the game from that point onwards. Ruairi Moore eventually replied before the second half water break. McElroy had chances to narrow the gap with frees but missed both.

Burns then seized the initiative with three scores in a row. McElroy did score the last two points of the day but Hunterstown march on and O’Raghallaigh’s will have a week to regroup for their do or die battle against Cooley Kickhams this weekend.