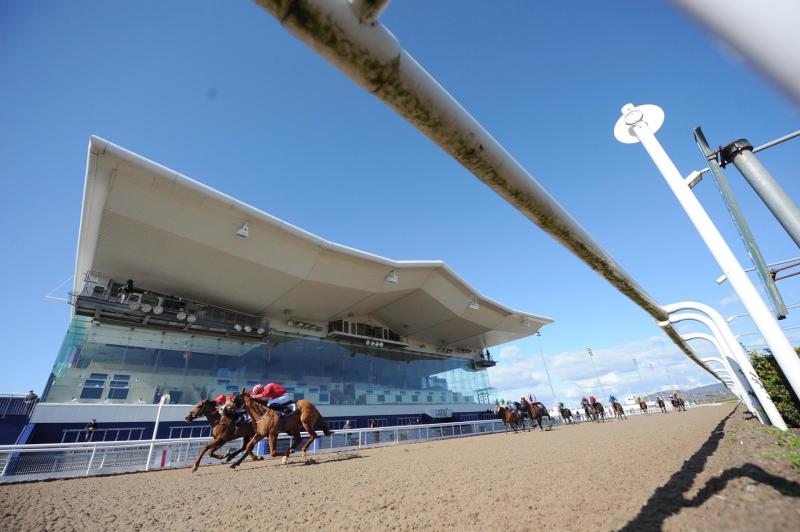 HMS Endeavour (evens fav) is bred to be good. By War Front, his mother is Lady Eli, who won the Grade One Juvenile Turf for fillies at the Breeders’ Cup meeting at Santa Anita in 2014. This was a horse that looks bound for big things and it did not disappoint as it took took to the All Weather surrounding of Dundalk Stadium last week.

Having won at Navan on his previous start, the Aidan O’Brien-trained runner followed up here in the Irish Stallion Farms EBF Race under Seamie Heffernan in the style of a progressive colt. It tracked the leaders for much of the five furlong contest before taking the lead when just inside the final furlong.

From here it coasted to the line to take the two year old contest by two lengths in an impressive showing. Only time will tell just how good this horse will become.

Having her first run since being claimed out of Eddie Lynam’s stable at Dundalk on September 2nd, Sister Lola (8/1) won at the first time of asking for new owner/trainer James McAuley when landing the Crowne Plaza Hotel Dundalk Handicap.

It was the daughter of Slade Power’s fourth win, three of them having been achieved at Dundalk. The winning trainer said: “The only credit we can take is that we claimed her. Eddie had her ready.”

This became 18 when Leo De Fury (15/8 fav) bounced back to winning ways with a comfortable success in the Join Us On Instagram @dundalk_stadium Race, and Clew Bay (9/2), also ridden by Shane, landed the card’s finale, the Find Us On Twitter @DundalkStadium Handicap. Her hard is clearly in excellent form and one to follow as we  head into the jumps season.

Winner of the Group 2 Mooresbridge Stakes at the Curragh in June last year, this victory will surely do Leo De Fury’s confidence a great deal of good. There are no such doubts, however, in relation to his jockey Shane Foley, who completed a fabulous four-timer on the card via his wins.

Never Back Down (22/1) got into the first division of the Irishinjuredjockeys.com Handicap as a reserve and jockey Joe Doyle seized his opportunity by adopting a ‘catch me if you can’ approach to the race.

With these tactics paying off, the plan gave the six-year-old gelding his first win since November 2018, landing a first ever success in Ireland. It was his fifth start for trainer Joseph Murray, who is based near Navan in Meath, who acquired him in March.

The second division of the handicap went to Skontonovski (11/1), who had gained his first career success just nine days earlier at Cork. He’s clearly in good heart and won fairly comfortably here in the hands of Ronan Whelan for trainer Ado McGuinness, for whom this was a twelfth winner at Dundalk this year. His stable continues to go from strength to strength.

Trainer Andy Oliver had three runners in the BetVictor Apprentice Handicap, including the market favouriite Blue Shadow (7/2 fav) and that support proved to be right, winning quite cosily (by 2.5 lengths) under Siobhan Rutledge. He was the third winning-favourite (or joint-favourite) of the evening from the first six races.

On what was a decent night for punters, this became four with Leo De Fury’s success.

The track's next meeting is set for Friday 24th September, a card that will feature the €50,000 Group 3 Al Basti Equiworld Dubai Diamond Stakes. A really good night of racing awaits.