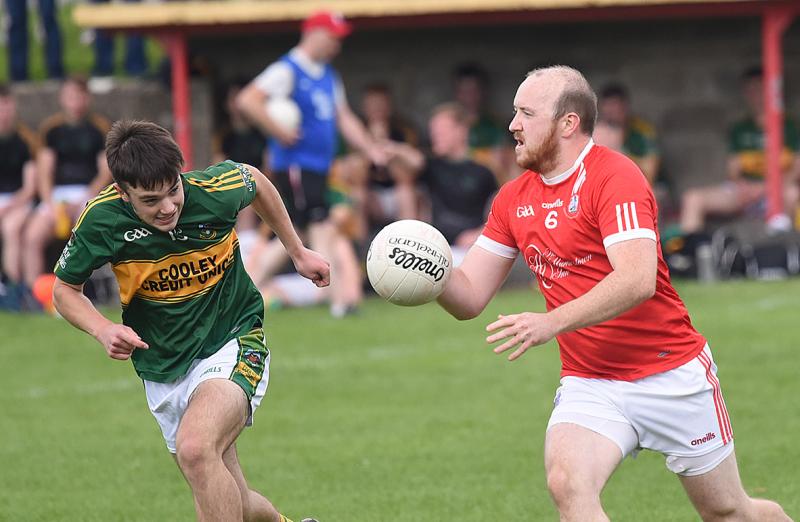 Hunterstown Rovers edged this cagey Intermediate Group C encounter at the expense of Cooley Kickhams in Dowdallshill on Sunday afternoon.

Two goals either side of the first half water break from both Burns brothers provided Rovers with just the required impetus to take control and take all the points on offer in the opener.

Patrick Johnston started liveliest for Cooley at full forward in their bright start as they led 0-3 to 0-1 thanks to points from Cooley’s best two performers on the day Fearghal Malone and Brian White.

Yet, despite being on top and dominating possession Hunterstown struck their first goal against the run of play.

Marc Ward, who started in the middle of the field instead of his injured brother Ryan, screwed an effort for a point short. Rovers corner man Brendan Lennon kept the ball alive and away from the grasp of Cooley keeper Sean Hayes and the ball broke to Dean Burns who happily tapped it home.

Right from the water break Hunterstown came out and pounced for another goal. This time Ryan Burns collected an excellent cross field ball from the impressive Dathai Carroll to turn and bury to the net.

Malone and Johnstone did respond for Cooley but Peter Dooley’s side would gladly take a 2-2 to 0-5 lead at half time.

Hunterstown added to their advantage with the first score of the second half. Ryan Burns intercepted a Sean Hayes foot pass across his own small parallelogram to bury to the net in front of the watching Louth management duo of Mickey Harte and Gavin Devlin.

Shell-shocked Cooley were stunned and substitute Ryan Ward and impressive Davy Finn clipped over fine points to give Hunterstown an eight point lead.

However the combination of Rovers sitting back and trying to pick Cooley off and the brilliance of Brian White the tension mounted. White kicked seven of the game's last nine scores.

A mixture of trademark free’s and curling efforts from White looked to reel Hunterstown in but Cooley needed a goal to take the spoils.

Aoghan McGuinness and Patrick Sheelan were thrown in by Gary Thornton in a last throw of the dice but Kickhams couldn’t find a breakthrough thanks to some stout defending from the mid louth outfit.

Also, with every member of the Hunterstown side behind the ball in the final quarter at times, chances of that elusive Cooley goal happening were very unlikely.

At the other end Brendan Lennon and Ryan Burns clipped over timely counter attacking scores to secure that Hunterstown win and beat Cooley for the second season in a row.