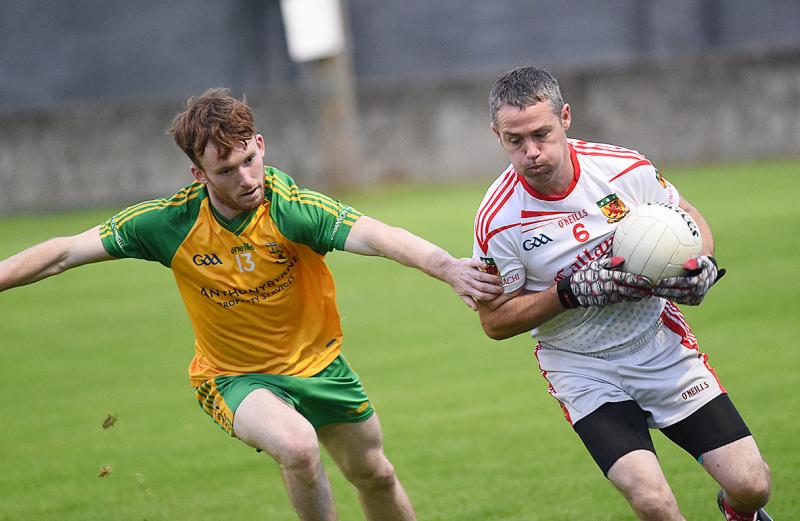 The teenager’s accuracy from dead balls was the highlight of the game but he also impressed in open play and his ability to win his own frees proved crucial, he finished with eight points, over half his sides total.

The Malachi’s slow starts to either half would prove to be their downfall. The Courtbane men shipped three unanswered scores after both throw in’s and with their opponents more efficient in front of the posts, the Mals didn’t need to supply them with those headstarts.

Despite Butterly’s performance it was his brother Bobby that really drove his team on in the early stages. His driving runs saw Fintan Martin land the opener and Barry Lynch fire over either side of Harry’s first free of the contest.

The Mals midfield pairing of Paudie McLoughlin and Padraig Moley found the target but Niall Cluskey was the dominant midfielder on show and was rewarded with a fine score to make it 0-5 to 0-2.

Unusually quiet Jamie Kelly scored an excellent point with his first touch but Harry Butterly grabbed hold of the game and fired over three scores in a row. Donal Begley did pull back two free’s but at half time it was double scores 0-10 to 0-5 in favour of the Mid Louth outfit.

Niall Cluskey was excellent all evening on the wing for Stabannon and he played a gorgeous one-two to clip over the first score of the second half, Aonghus Giggins found the target after a never ending scramble in front of the post.

Butterly continued his coronation with a couple of wonderful free kicks in full view of the gallery on the bank and in the stand to push them eight ahead.

After going scoreless in the third quarter Padraig Moley ignited the Malachi’s revival with a couple of scores after the second half water break. With Shane Sweeney sweeping successfully all evening for Stabannon, the Mals struggled to find the required goal until it was too late.

Moley played a 50’ free short and played a neat one two and his lofted effort sailed into the net making it a four-point game, 0-14 to 1-7. Substitute Colin Rooney quickly added another to reduce the margin even more.

Pressure built even more for Stabannon when Sweeney was given a straight red card, but Robbie Callaghan steadied the nerves with a late point to seal the Group A win.

A virtual meeting will take place on Wednesday, September 22nd