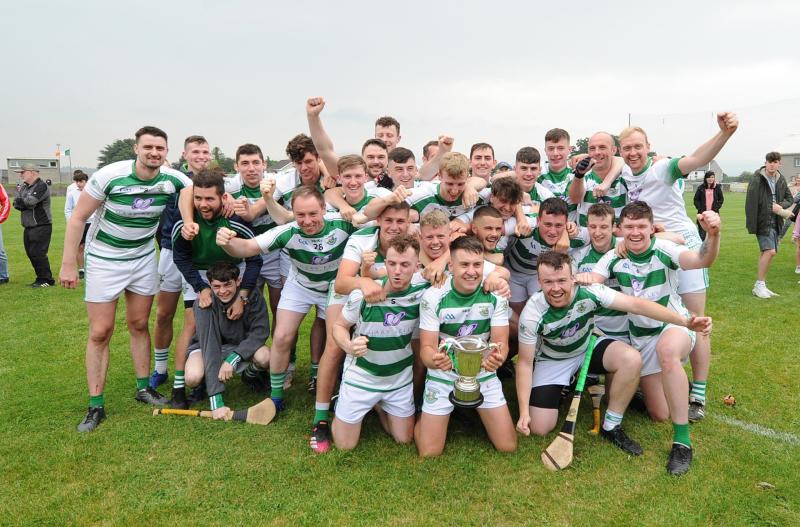 The hurlers of St Fechins were appearing in the Louth Senior Hurling Championship Final for the seventh successive year and having lost in each of the last four, two of them to Sunday's opponents, they were determined not to suffer the same fate again.

They qualified for this final as group winners and came into this game in Dowdallshill, in front of the biggest crowd at a hurling final for many years, in good form and justified their favourites tag leading from the very first whistle.

They also led their opponents by five points on separate occasions in both halves and even opened up a seven point lead late in the game before conceding the game’s only goal. But they were not to be denied a deserving victory capturing the Paddy Kelly Cup for the third time in the club’s history.

A foul on midfielder Donal Ryan presented Paddy Lynch with the opportunity to open the scoring with a pointed free inside 60 seconds.

Having featured at full back in their three previous matches, explaining the number three jersey on his back, Seaghan Conneely started this match at full forward and it was he who set up Sean Hodgins for the Fechins second point.

Their early dominance yielded a third point on four minutes from another Lynch free before Knockbridge opened their account when Shane Fennell fired over from a tight angle to the right of the post.

From the resultant puck out David Kettle won possession and sent the sliotar straight back over the crossbar. The South Louth outfit restored their early advantage with a close-range point from Conneely and another close range free from Lynch.

Ricky McKeown replied with a point direct from a sideline cut on the left wing, a terrific skill in itself, on 11 minutes. The Fechins went close to scoring the game’s opening goal, denied only by a goal line clearance from an alert Knockbridge defender.

A long range point from the right wing by David Kettle had his side just trailing by the minimum at the first water break 0-5 to 0-4. The Fechins upped their game over the next passage of play accounting for four points in a row.

A foul on the lively Paul Matthews saw Paddy Lynch grab his fourth point of the half followed by one from play by team captain Peter Fortune on 25 minutes. Full forward Conneely grabbed his second point from about 30 metres out to leave his side leading by double scores, 0-8 to 0-4.

That lead quickly became five when Fortune shook off a couple of tackles to fire over from close range. In the time that remained to the break Fennell accounted for a brace of points, the latter from a 65 metre free followed by one from play from the right wing by Conor Deane to leave them trailing by just two at half time 0-9 to 0-7.

Having opened this final with three successive points the Fechins did likewise on the resumption with points, all from play, from the sticks of Peter Fortune, centre half Jamie McDonnell and a terrific effort from the halfway line from Ryan Walsh.

Shane Fennell brought an end to this run of scores when he fired over a free from the left wing on 40 minutes.

The Fechins saw Seaghan Conneely's goal bound effort shave the outside of the right hand post before another Fennell point, this time from a 20 metre free, left just three between them again on 43 minutes, 0-12 to 0-9 and that remained the score at the last water break.

Instrumental in a lot of the Fechins good play, Paul Matthews finally got himself on the scoresheet when he finished off a good solo run with a good point.

Further good approach play saw the eventual winners awarded a 65 metre free which Paddy Lynch again struck over with aplomb on 51 minutes. They were soon six in front when Fortune set up second half substitute Michael Byrne for an easy score.

Knockbridge substitute Ronan Mulholland replied with a good point of his own and after Paddy Lynch had accounted for another pointed free at the other end Mulholland saw his next effort just clearing the crossbar when a goal was clearly on his mind.

Michael Byrne and Sean Kerrisk completed the scoring for the winners with further points from play as the gap was now the most it had been for the entire match when stretched to seven points.

Knockbridge gave themselves a glimmer of hope when Conor Deane took a pass from David Kettle before firing past keeper John Crosbie with Kettle himself on target late on to leave just three between them.

However time finally ran out for the holders as the St Fechins greeted the referee’s final whistle with scenes of wild celebration as the run of four straight finals defeats came to an end.

Afterwards the man of the match award was collected by Paddy Lynch before the Co Board Chairman Peter Fitzpatrick presented the Paddy Kelly Cup to the St Fechins captain Peter Fortune.