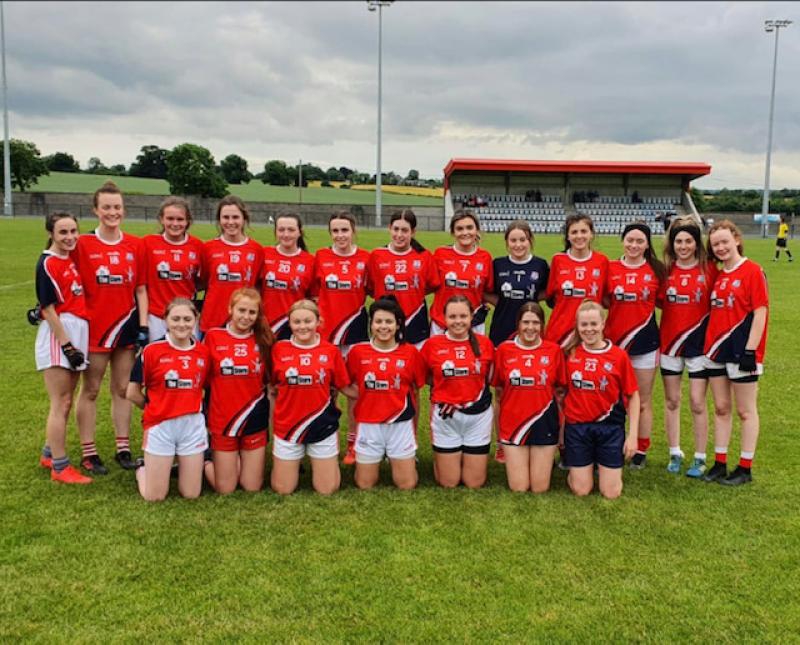 The Hunterstown team which defeated Kilkerley in the Junior Championship

The Hunterstown Ladies travelled down to Kilkerley last week dressed to impress in their new jerseys sponsored by “The Store” for the Junior Championship season. This was a nail biting match from start to finish, with the girls showing true grit and determination in a thrilling come back from this impressive group of ladies.

From the start, the game was a pacey event with Kilkerley pointing first. Mischa Rooney and Ava McNally both returned the favour at the opposite end. Kilkerley pushed forward challenging the defence.

Anna Hickey and Ruth McElroy fought hard to win ball and that resulted in both Amber Quaille and Abbie Sheridan getting a score on the board. Going in at half time Hunterstown trailed 0-07 to 2-06.

The ladies in Red started the second half strong and showed a seven point deficit wasn't holding them back. Covering a lot of ground throughout the match, Sheridan got on the scoreboard in the opening minutes of the second half.

Órlaith Carolan scored a well worked ball all the way from the backs with McNally, Quaille and Mia McCartney working it up the field from a kick out.

With one point in it, Kilkerley attacked up field going for the top left corner, but Dearbhla Rock the Hunterstown keeper pulled off an amazing save. Just before the end of the third quarter, Kilkerley managed to sneak a goal to create a four point cushion.

The final quarter brought true grit and determination to the Hunterstown team with the girls winning the Kilkerley kickouts and working the ball through the hands and with patience in attack.

Mischa Rooney, the Hunterstown 14 year old superstar fired one into the back of the net to bring it to a level game. Fresh legs came on in the dying minutes in Kerris McCabe and Ciara Martin, who held the ball well. Two minutes from full time, a take down of a Hunterstown girl resulted in a free in front of the goal, Mischa stepped up and gave Hunterstown the lead.

With the final kickout, McNally took the ball from the air and delivered a quick pass to Aine Fanin who slotted it over, a score which saw Hunterstown win by two points.