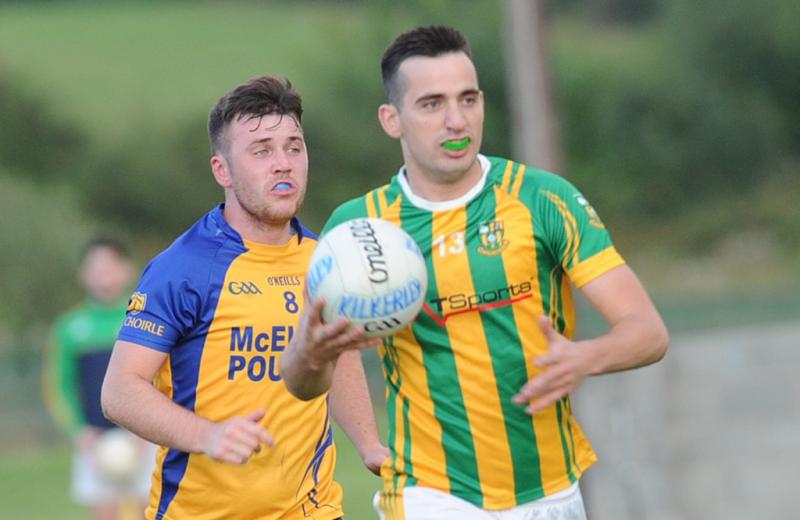 Clan na Gael maintained the pressure on neighbours, Roche Emmets, at the top of Division 2 thanks to a four-point victory over St Kevins at Philipstown on Saturday evening.

The visitors looked to be on course for a comfortable win when they turned around with a seven point lead, but had to withstand a second half revival from the Kevins before returning home with a victory that saw them move top of the table.

Despite the defeat, there were parts of this performance that will offer St Kevins encouragement ahead of the championship, but they will be disappointed that they remain bottom of the table and as have yet to pick up a league point.

Shane Caroll was the star for the Clans in the first half as he grabbed two goals and was also among the points along with Billy Smith, Paul Crewe and Robbie Curran as their side lead by 2-8 to 1-4.

The Kevins reply came in the form of a goal from Adam Harper and points from Cian Callan. The hosts battled to get back into the game in the second half and two goals from Cian Callan saw them remain very much in the hunt. However, the Clans were not to be denied and a third goal from Conall McKeever helped them clinch their sixth successive win.

Roche Emmets continued their revival with a comfortable victory over O Raghallaighs in Drogheda on Sunday afternoon. Three first half goals did the damage for the visitors as they moved back to the top of the table ahead of Clan na Gael who had gone to the summit as a result of their victory on Saturday evening.

Boosted by their victory over St Kevins in their previous match, the Roche men were in fine form in the first half. Barry O’Hare once again led the way on the scoresheet as he bagged 1-4, while Liam Carthy and Mark Byrne scored 1-1 apiece to send their team in with a 3-6 to 0-5 advantage.

The Drogheda side improved in the second half and added eight points to their tally with Kyle McElroy finishing the game with seven points. However, they were unable to produce the goals they needed to really challenge the lead.

Roche always looked to be in control in the second period and although they failed to find the net again, points from Mark Byrne, Mark Reynolds, Dan O’Connell and O’Hare were enough to see them come out on top by eight points.

The Joes came out on top in this clash of neighbours at Cluskey Park, with the visitors greatly depleted in strength through the absence of a number of key squad members. The Joes hit six goals, three in each half, with Craig Doherty on target with a hat trick.

Doherty and Ciaran O’Brien opened the scoring with pointed frees for both teams. The first goal of the game came on six minutes for the Joes when Conor Neary, Oisin McGuinness and Conall Smyth linked to setup Craig Doherty to finish to the net. The Joes added points from Ben Collier and Jack Mulligan with Conor Kieran on target from distance for the O’Connells.

The first five minutes of the second half saw the sides exchange points with Jack Mulligan and Ben Collier on target for the Joes and the O’Connells responded with two excellent points from Jackie Agnew and Emmet Byrne.

On 36 minutes an Alan Quigley ball over the top sent Craig Doherty through for the Joes fourth goal. Paul McKeever added two points for the O’Connells with Alan Lynch and Killian McDonnell on target for the Joes.

Gabriel Bell and Alan Quigley combined with Gabriel Bell crashing the ball to the net for a Joes goal on 44 minutes. The O’Connells edged the scoring in the final quarter adding 1-3, Alan Quigley finished an excellent Joes move when his well-placed shot hit the top right corner of the net leaving the Joes winners by 15 points.

Hunterstown Rovers maintained their good run of form with a home victory over Dundalk Gaels on Saturday night that sees them move onto 12 points in the table. The tight affair had two major turning points at the end of the first half. Dean Burns found the net for Rovers while Gaels half back Emmet Lindsay was sent off just before that decisive major.

Hunterstown dealt with the slippery conditions quicker opening up an early 0-4 to 0-1 lead, wingback Daithi Carroll continuing his good form with the opening score of the game. At half time Rovers were ahead by six, 1-7 to 0-4.

Upon the resumption Ger McSorley got his second and third point to spark a revival and leave a goal between the sides but Glen Matthews was on hand to keep Peter Dooley’s side in control. Two late Tom O’Connell points narrowed the gap even further at the finish. However, the hosts held on to the win which now sees them sit third in the Division 2 table.

KILKERLEY Emmets made it five wins in a row with a three point win at home against a gutsy Oliver Plunketts side in a game that was all about brothers at Páirc Chill Choirle on Saturday night.

Tadhg McEneaney top scored on the night but it was his brother Conal that caught the eye in the opening half when hitting three scores as the hosts led 0-8 to 1-2 at half time.

Kevin Keogh bagged the first half goal for the Drogheda men and not to be outshone by his sibling, Gary scored a fortuitous goal in an impressive third quarter for the visitors.

Keogh’s shot for a point looped into the back of the Kilkerley and they relied on James Fegan off the bench to give a slender lead. Tadhg McEnenaney would have the final say with 1-1, to wrap up victory for Dessie Lennon’s in-form side.