Hollywood Developments Division One League Round Up 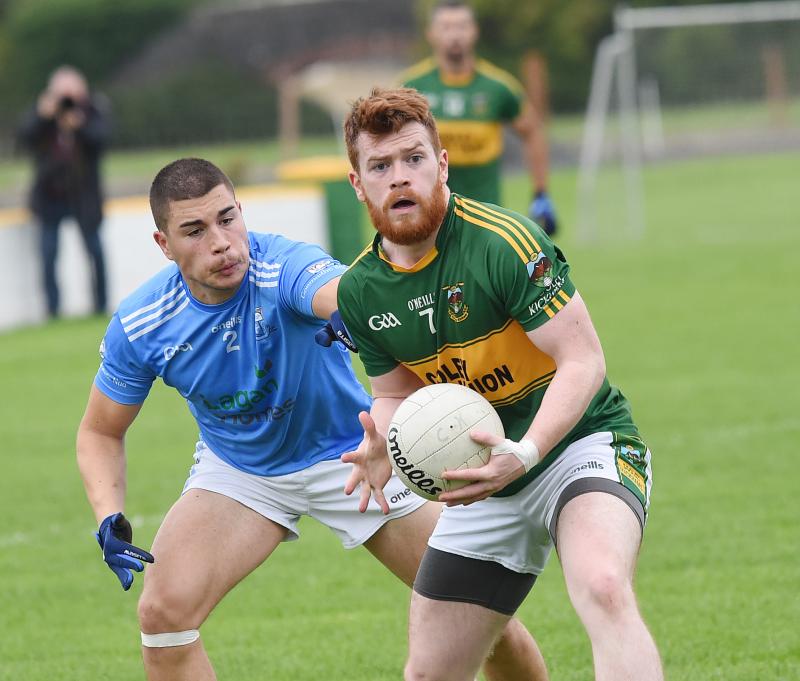 The return of Robert Kearney to Cooley Kickhams colours wasn’t enough to inspire the peninsula men to victory as Newtown Blues made it a worthwhile trip to Fr McEvoy Park on Sunday afternoon.

The former rugby star lined out at full-forward in his first outing since the 2004 Senior Championship Final but he could do little to prevent his team from falling to a 12-point defeat.

Having lost out to another peninsula side, St Patricks, in their previous outing, the Blues bounced back in impressive style to consolidate their position in fourth place in the table.

Cooley went into the game on the back on a morale-boosting victory away to St Fechins a week earlier but they were unable to build on that success as the Blues turned in a very impressive second half display.

The first half was a rather cagey affair and with both defences on top the sides found scores difficult to come by. However, when the short whistle blew it was the visitors who held a slender 0-5 to 0-4 advantage.

The second half saw the scoring rate increase considerably and it was the Blues to seized the initiative.

Conor Moore found the net for the Drogheda men as did substitutes Ciaran Downey and Emmet Carolan to put their side firmly in control. Despite Fearghal Malone finishing with four points, Cooley were unable to conjure up any real response and the Blues held out comfortably in the end.

St Marys maintained their unbeaten run in this year’s Division 1 League when they came out on top at home to St Mochtas on Sunday afternoon.

The Ardee men have dropped just one point from their eight outings and on this occasion they showed their battling qualities as they recovered from a five-point interval deficit.

The in-form Mochtas went into the game hoping to overtake the hosts at the top of the table but despite battling their way into a very good position, they were unable to complete the job in the second half as the Marys turned things around with three unanswered goals.

The Louth Village men took the game to their opponents from the opening whistle and had Declan and Ciaran Byrne once again in good scoring form, while a goal from Gerry Garland saw their side take a 1-11 to 0-9 advantage into the interval.

The Marys came out in the second half in determined mood and they soon got a grip on the game. They displayed a killer instinct in front of the posts as Conor Gillespie, Ciaran Keenan and Liam Jackson all found the net to give their side victory.

Naomh Mairtin returned from Knockbridge on Saturday evening with two points after coming out on top against St Brides. The Jocks were the earliest out of the traps and registered the first score of the match on three minutes with a pointed free kick by Conor Whelan.

Not long after Sean Healy extended this lead before Kevin Hearty raised the white flag for the first time for his side on nine minutes. It was a low scoring affair but Naomh Mairtin added a minor just before the water break.

The Monasterboice men scored three unanswered points late on from veteran, JP Rooney (2) and Joe McGrane before Patrick Reilly got his side’s second point of the half just before the interval to cut the deficit to 0-6 to 0-2 at half time.

The deficit was reduced to three when Patrick Reilly slotted over a free kick soon after the restart. However, this was the Reds last score of the match until stoppage time.

Nh Mairtin moved up a number of gears after this and dominated proceedings with four unanswered points. It could have been more as many chances were missed and St. Brides had the woodwork and custodian Darren Breen to thank for a great save.

Substitute Sean Marry did slot over a pointed free kick in stoppage time for the home side, before midfielder Val Leddy concluded the scoring just before full time.

Future Championship opponents Sean O’Mahony’s and St Fechins held nothing back on the Point Road on Sunday afternoon with the hosts drawing first blood this season with a five-point victory.

Stephen Kilcoyne and Niall Devlin would trade early scores before Devlin would make way with injury. Kilcoyne would go on to finish the game with ten points.

Minutes after the first half water break O’Mahonys winger Oisín Breen raided up the right hand side and unselfishly squared the ball across the small parallelogram for Terry Kelly to bundle the ball over the line and raise the green flag.

Kelly would add to tally soon after and centre back Johnny Connolly would give the hosts a healthy 1-9 to 0-8 lead at half time.

With Kilcoyne on fire, O’Mahonys began the second half with five unanswered scores and despite a Ryan Walsh goal, the Dundalk men never looked like losing the dress rehearsal.

Geraldines made it two wins in a row as they saw off a determined Dreadnots outfit in a low scoring encounter at Clogherhead.

Both sides were without a number of starters and that showed on the scoreboard. Dan Corcoran’s first half strike would prove the difference in the engaging affair.

With Owen Murphy pointing from a penalty, the visitors led by that goal, 1-5 to 0-5 at the turn. Dreadnots would rue that penalty miss down the stretch as the game became scrappy and scores more infrequent.

Murphy would add to his tally along with Conor Faulkner but points from Shane O’Hanlon and one from substitute Jamie Callan guided the Gers over the line.