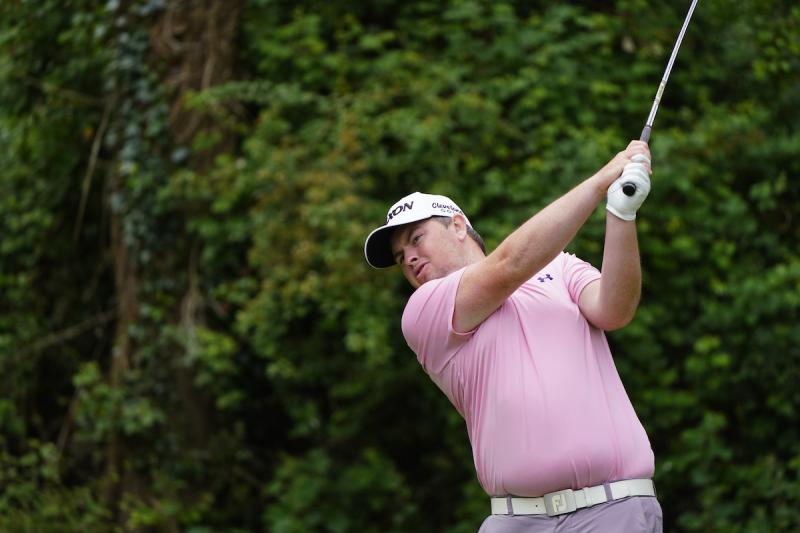 Caolan Rafferty in action, who won both his games yesterday as Leinster defeated Munster 7-4 in the first round of the Interprovincial Golf Championships held in Shannon Golf Club. Pic: Golf Ireland

It was a strong start for Leinster and Caolan Rafferty at 2021 Interprovincial Golf Championship, with the men from the East topping the standings following the first round of action at Shannon Golf Club yesterday.

Rafferty was a huge part of the Leinster victory over a strong Munster outfit, his two wins helping them record a 7-4 win over Munster to go to the top of the table.

Going unbeaten in the morning foursomes proved crucial with Leinster winning 3.5 out of a possible 4 points. Three 3&2 wins showed their dominance in the format, as the teams shared the 7 points available in the afternoon singles.

Rafferty was out in the second Foursomes group and along with his partner Marc Boucher of Carlton House they comfortably defeated Richard Knightly and Darragh Flynn with two holes to spare.

In the afternoon singles, the golfer representing Dundalk Golf Club went out last for side, again showing why he was recently invited to play in the Irish Open as he continued his fine form with a 4&3 victory over Darragh Flynn

In the other match in the competition Connacht defeat Ulster 6-5. Sharing the four points in the morning foursomes, singles wins for Jack McDonnell, David Kitt and Simon Walker saw the Westerners earn the opening day win.

Thursday’s ties sees Leinster face Ulster with Connacht meeting Munster this morning with Leinster looking to consolidate their position at the top of the table ahead of the final round of action.