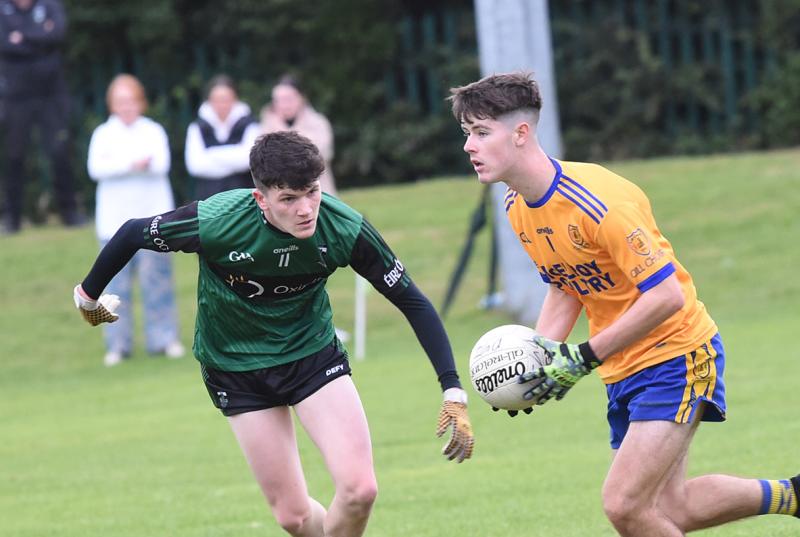 A second half goal from Fintan Brady tipped the tight Division Two contest in the favour of Kilkerley Emmets over Dundalk Young Irelands on Saturday night.

The match winner came ten minutes from time and provided Kilkerley the confidence to take all points on offer. Late points from Tadhg McEneaney either side of Substitute Daniel McKeown’s effort saw the visitors over the line.

The home side were in a commanding position at half time leading 0-8 to 0-6. Full back Cian O’Niaraigh opened the scoring with a marauding run. Kilkerley at this stage were struggling to cope with Irelanders attacking play, Peter McStravick and Jordan O’Donoghue particularly impressive with a brace a piece.

After the break, Kilkerley tightened up at the back, Irelanders relied on midfielders Peter Nixon and James Pendergast to find the target after Brady's goal, while McEneaney clipped over four crucial second half points for the Dessie Lennon's men.

In this top versus bottom clash, it would be league leaders Roche Emmets that would come away with the spoils over winless St.Kevin’s at Páirc de Róiste on Saturday night.

An additional time point by Dan O’Connell pulled Emmets back level in a game where the Philipstown men seemed likely winners before a wonderful Glen Stewart conversion and Barry O’Hare’s goal put Paul Grier’s men into an unassailable position.

After a tight opening, the visitors began to exert their influence, much of their good play going through Cian Callan. The talisman would finish with 1-5 of his sides total. The mid-Louth men, under the tutelage of former Roche boss Niall Callan led 1-6 to 0-5 at half-time.

And the gap reached five before Emmets kicked into some sort of coherent gear. O’Hare was keeping Roche in it from frees, although the tide was turning even prior to the dismissal of Kevin’s full-forward Karl Martin on a second yellow card.

O’Hare cut the gap to one entering the game’s dying embers and with the table toppers able to effectively confine Kevin’s to their own half, an equaliser seemed inevitable, a neat pass from Roche’s leading marksman finding O’Connell inside the semi-circle and the No14 swung over to draw the teams on terms, 1-9 to 0-12.

In the next attack, Stewart, back into the fray after going off earlier through injury, split the posts with a beauty from the right wing – and once O’Hare turned his man and shot low to the net, the points were safely tucked away.

Drogheda side O’Raghallaigh’s had to withstand a terrific second half comeback from Dundalk Gaels to take victory at the Ramparts on Saturday night. With the Gaels down five at the break, they rallied back to take the lead down the stretch only for the Drogheda men to find the net at the death through substitute Ben Smith.

Alan Flynn’s side led 2-5 to 0-6 at the turn thanks to goals from two of O’Raghallaigh’s inside forwards John Horan and James Smith. Malcolm McDonnell’s charges came out for the second half in determined fashion with Derek Crilly and a Gerard McSorley brace finding the range before Sean Murray found the net.

Kyle McElroy kept the O’Raghallaigh’s ahead after Crilly levelled but substitute Tom O’Connell looked to hand the Gaels the win until Smith popped up with last gasp winner.

Three first half goals would decide this Division Two tie between Clan Na Gael and Naomh Fionnbarra in the Dundalk side’s favour. The match winning blitz came in a five minute spell in the second quarter of the game. Paul Martin found the net twice and then the mercurial Billy Smith palmed it into the net to send the Dundalk men on their way.

With nine points the margin at half time, 3-4 to 0-4 the Finbarrs good start through Ciarán Markey would count for nothing.
With the Clans in control, Brendan Healy’s side showed heart to continue to battle. Padraig Butterly scored a brace with a fine effort from play and a well taken point from a mark.

Replacement Mikey Doyle found the target while Smith and Martin could add to their tallies to keep the scoreboard ticking as the result was never really in doubt in the second half.

Hunterstown made it four wins from five played when they had a convincing victory over O’Connells at the Grove on Saturday evening. The visitors raced into a 0-6 To 0-1 lead with all their scores coming from the boot of Ryan Burns - five of which were frees - and the O’Connell's pointed from Liam Kiernan.

Glen Matthews got the first goal of the game for Rovers before O’Connell's replied with two points from Emmet Byrne and an excellent 45 from Jackie Agnew. The sides shared the next two points to leave the score 1-7 to 0-4 after 25 minutes.

The visitors finished the half stronger with a goal from Ryan Ward and points from Matthews, Dean Burns and Finn Kelly, while Agnew got the last point of the half to leave the score at the break 2-10 to 0-5.

The second half continued much in the way of the first with Dean Burns getting Rovers third goal and points from Jamie Ward and Ryan Burns put them further ahead. Agnew got his third point of the game for the Bellingham side but Rovers replied with three of their own.

Agnew got another point for his side but substitute Colm Murphy got Hunterstown’s fourth goal of the game and Ryan Burns finished the scoring for the night with his ninth point of the game.