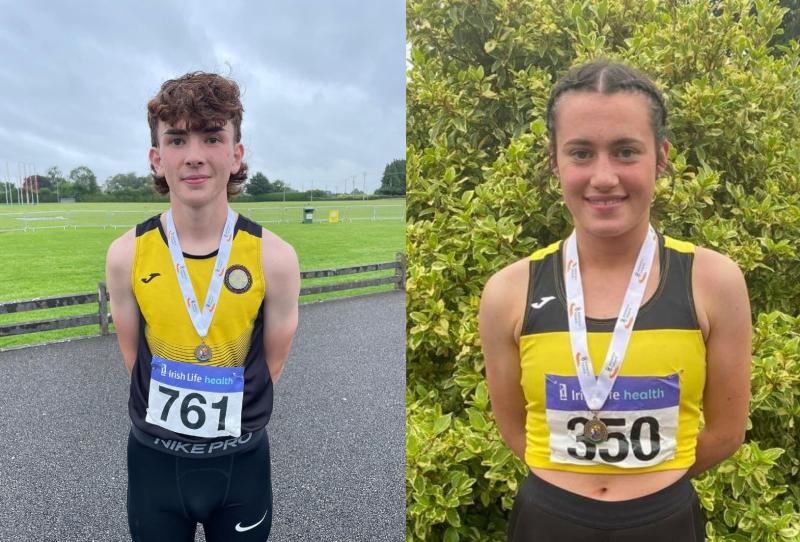 Sean Connaughton and Erinn Leavy with their medals following success at the National Championships in Tullamore. Credit: Dunleer AC Facebook

The Louth success at under level continued last weekend, with athletes from Dunleer AC coming back home to the Wee County with three more medals from Day three and four of the National Juvenile Track and field Championships held in Tullamore.

The Mid Louth club had a select but impressive entry list heading to Offaly, with four young athletes competing in events ranging from middle distance running all the way down to hurdling and throwing.

Following on from his hard fought silver medal in last week’s 3000 meters behind the current European U20 champion, Sean Connaughton was chomping at the bit to get to the start line in the U18 1500M final.

Showing his class, the young runner fought hard to secure a second medal in as many weeks, his personal best time of 4.03.96 enough bag third on the podium.

Another athlete returning to the track was Erinn Leavy, who after narrowly missing out on a medal when finishing fourth in the girls U16 800 meters in difficult conditions was hoping to this time make the podium when she lined up in the 1500 meters final.

Not to be outdone, Leavy showed immense skill to regroup from that setback and secure a bronze medal with a time 4:45. Two superb times from the club’s young runners who are sure to make an impact in the years to come, building on such fine performances.

There was also success for Dunleer in the field events, with Tadgh Reilly taking part in U18 Shot Putt. He would earn his spot on the podium by throwing a career best 11.34m to land the bronze medal. A fine showing from an athlete with serious promise.

Meanwhile, there was no luck for Conn Bonar who was lining up in a talented U16 100M hurdles race that went off in horrendously wet conditions.

He was sadly drawn in lane eight, a lane which seemed to have the most puddles of water on it making any sort of success very tough to achieve.

Unfortunately, he took a tumble mid race but was uninjured and will be back on track to fight another day soon.

Next week sees more of the club's star athletes head for county Offaly, with Cliodhna Reilly competing in the u12 600m and Cormac Greene also in the 600m. They will be hoping to emulate the great success the club has been having and help keep the Louth medal train going.