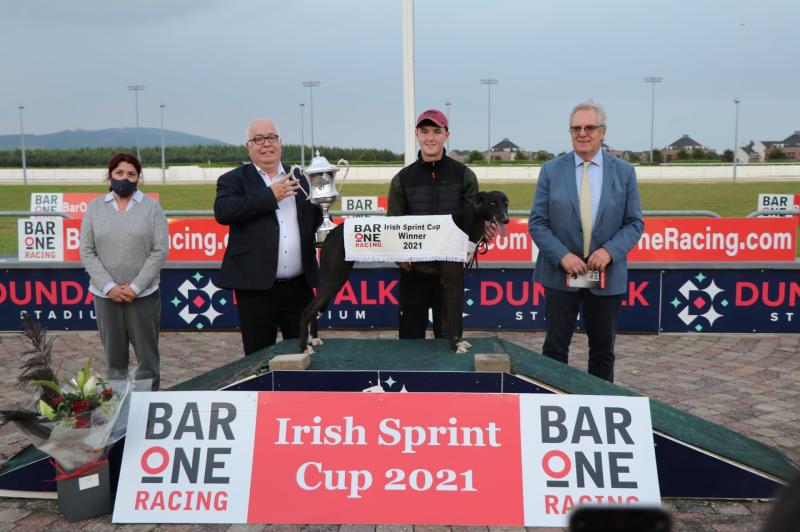 A good break wasn’t half the battle for Good Cody in last Sunday night’s final of the Bar One Racing Irish Sprint Cup at Dundalk Stadium – it was a race winner.

In terms of betting, this renewal was one of the most open there’s been in the 17-year history of this Barney O’Hare sponsored classic. Layers, Mickey Rooney and Paul Connolly, went threes the field before the winner and Ela Supremo closed at 11/4 joint-favs.

But in the race it was a closed shop. Good Cody took charge from the word go, flying out from trap two, and having no serious challenger after that.

The Tipperary-owned and trained dog, the youngster of the party, still to reach his second birthday had daylight between himself and his nearest challengers at the bend, and he showed inclination to give up his lead on the run home.

Maintaining a strong gallop, the son of Definate Opinion and Soho Ark – owned by John Kennedy, Gortnahoe – got to the line four lengths ahead of rank outsider, Drahan Jet, with Ela Supremo a further head back in third.

Maybe Aye was next to finish, ahead of the Newry runner, Blue Corner, and having been burdened with a trap one draw, Corbrack Prince, who had the competition’s fastest clock going into the decider, was the whipper-in.

Adding lustre to the win, Good Cody’s time of 20.86 was not only the competition’s fastest, but also the fastest ever recorded in a final.

You could say the Kennedy runner was bred for the track. His sire, Definate Opinion, was one of the great International performers, taking the title in 2010 and coming back the following year to successfully defend his crown.

The Puppy Derby at Shelbourne Park is his next objective, and in the opinion of his owner, improving with age he should be an ideal candidate for next season’s Irish Derby.