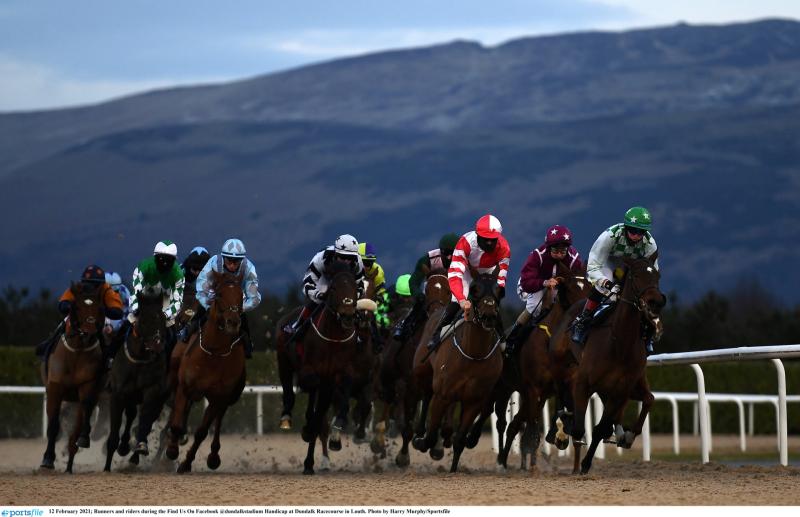 Firstly, the Juddmonte-owned Angel Palm (9/1) ran out an impressive winner of the €21,000 BARONERACING.COM Mourne Handicap.

The daughter of Dark Angel won with authority, after which her rider said, “She did it very nicely; this trip (six furlongs) on this type of ground and racing round a bend suit her. She picked up well and galloped all the way to the line. Getting ‘black type’ for her should be no problem”.

The double was completed when Ides Of August (14/1), owned by Newtown Anner Stud Farm, won the €45,000 Irish Stallion Farms EBF “Red God” Handicap. In doing so, the gelded son of American sire More Than Ready gave Ger a third win in this valuable race in the last eight years.

Ger’s assistant, and brother, Shane, said afterwards, “He has the pedigree and knee action of a real ‘dirt’ horse. They went a good gallop and the race panned out perfectly for him. He’ll be a nice horse for next year, not least on this surface.”

Ger and Colin had to settle for third place with Moony Dreams in the card’s opening race, a maiden for two year-olds, with victory going to the Donnacha O’Brien-trained Absolute Ruler (9/2), a nicely-bred son of War Front that looked good in scoring on his debut.

Winning jockey Gavin Ryan said: “He relaxed and travelled nicely and I always knew he would pick up the leader. He looks smart going forward and ten furlongs should be no problem to him (today’s trip was a mile).”

The two divisions of the Download The Bar One Racing App Handicap produced contrasting outcomes.

Division One went to the gambled-on Brendan Duke-trained Pride Of Pimlico, who saw his price contract from 16/1 to 8/1 before running out a 1.25-length winner in the hands of Rory Cleary.

Division Two was much closer with the David Marnane-trained Tynamite (18/1) getting up in the shadow of the post to collar long-time leader True Conviction, the winning distance being a head. It was a fourth Dundalk win for the seven year-old, who was ridden to victory by Oisin Orr.

Well on his way to being crowned this year’s champion apprentice in Ireland, Dylan Browne McMonagle got another winner on the board when Baldomero (9/4 fav) won the Apprentice Maiden for Joseph O’Brien.  It was a 35th win of the current campaign for the former Irish boxing champion who won the Dingle Derby when aged just 12.

Another successful apprentice on the day was Nathan Crosse, who rode his first winner for Jessica Harrington when It’s Snowing (15/2) landed the Irish Stallion Farms EBF Fillies Maiden. Based with Willie McCreery, Nathan rides out for Jessica once a week.

It’s Snowing is now a valuable proposition as a broodmare as her grand-dam, Woodland Dream, is the dam of the great Snow Fairy, a six-time Group 1 winner whose successes included the Epsom Oaks, Irish Oaks, Hong Kong Cup and Irish Champions Stakes.

There was some joy for punters in the ‘lucky last’, the Crowne Plaza Hotel Dundalk Handicap, as the 4/1 market-leader, Mokhles, came home 2.5 lengths clear in the hands of Luke McAteer.

Trainer by Anthony McCann, memories of the greatly-missed Oliver Brady came flooding back as the winning owners, the Up Monaghan Syndicate, along with Oliver’s business partner Rita Shah, flanked the winner as he returned to the winner’s spot.

It was also a reminder of the great work that Rita’s Shabra Foundation continues to do in raising funds for essential hospital equipment. The work begun by her and Oliver continues successfully to this day.

Dundalk will race again on Friday September 17th, which will be the first of 22 meetings  to be staged the Stadium before the end of the year.