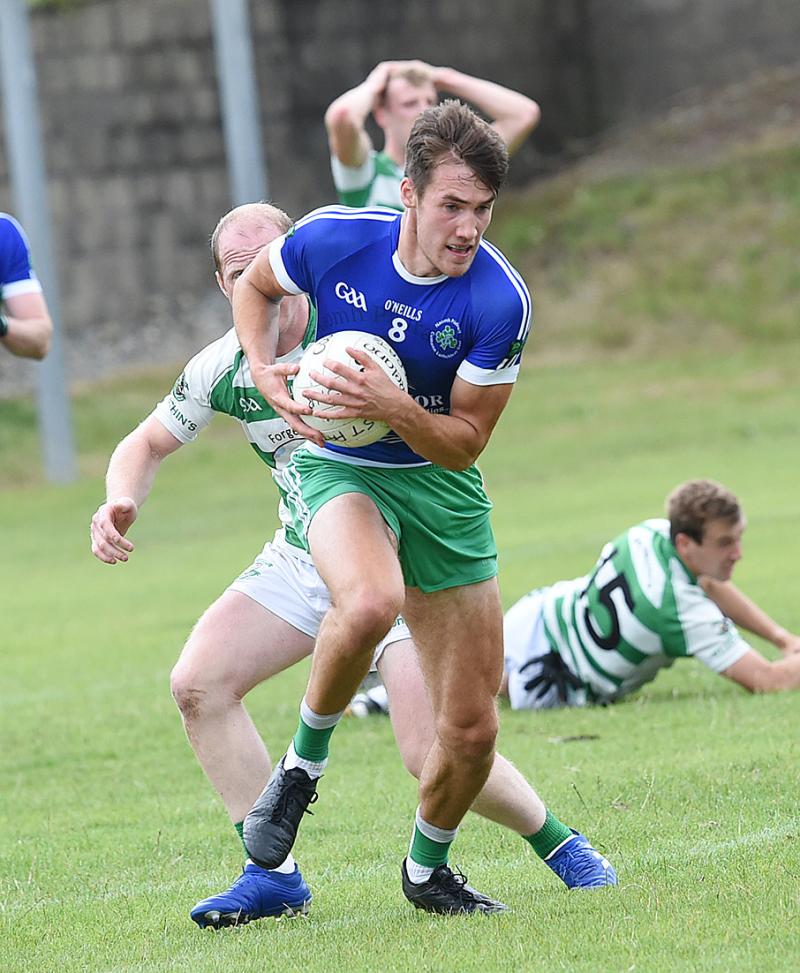 St Mochta’s made it four Division One wins in a row in Clogherhead when they accounted for a spirited Dreadnots side on a blustery Sunday afternoon.

The victory didn’t look on the cards when the home side found the net with two first half goals to leave the Louth village men two down at the break by 2-2 to 0-6. Pat Lynch and Carl Monaghan were the Clogher goal scorers.

Kieran Quinn’s side never panicked and upped the intensity in the second half and were soon level due the accuracy of Declan Byrne. The county man would finish with nine points in total.

With Byrne spearheading the attack, Andrew English clipped over a brace before being substituted, while Peter Kirwan fired over three points in response for the hosts.

Once Philly Englishby found the net, the visitors never looked back and took the spoils with an impressive seven point turnaround.

OLD foes, Newtown Blues and Mattock Rangers renewed their rivalry with an entertaining contest in Collon on Sunday afternoon with the visitors coming away with a narrow victory.

The hosts started much the better side, despite John Kermode’s fisted effort being ruled out for a square ball. Mattock led 0-5 to 0-1 in the opening quarter with Aaron O’Brien and Jack Thompson punishing some wayward Johnny McDonnell restarts.

It wouldn’t be long before Kermode would find the net however as the towering full forward rounded Jamie Mulholland before Ross Nally quickly followed up with a penalty after a James Caraher foot block. Mattock composed themselves to make it 2-3 to 0-8 at the turn with points from Cathal Fleming.

The sides would go point for point in the second half. Fergal Donohoe landing a terrific point as Fleming would continue his accuracy with frees for the Collon side.

However with Rob Carr in fine form and Ciaran Downey landing points, the Blues controlled the proceedings despite Ciaran Cluskey Kelly being black carded.

Mattock with the numerical advantage, couldn’t mount enough pressure to turn the game in their favour and they soon were down to 14 men when Thompson picked up a second booking.

The game petered out after that, as both sides emptied their benches before the Blues emerged with the win.

Eoghan Callaghan’s goal at the start of the second half gave the county champions Naomh Mairtin the two points on offer away to Cooley Kickhams on Sunday afternoon.

Cooley were excellent on the day and deserved something from the game as they posed Fergal Reel’s side with a number of headaches in the opening half.

Cian Connor operating on the ‘forty’ found the scoresheet and was one of those, along with Brian White, who returned to the starting fifteen for Gary Thornton’s side at midfield.

It was stalemate at the break, five points apiece, Conor Whelan with two and Sam Mulroy with three for the Monasterboice based side.

Once Callaghan found the net in the 36th minute Cooley could never bridge that gap. Whelan and Mulroy adding to their tallies and substitute Thomas Clarke also finding the target to secure Naomh Mairtin’s win.

On an emotional day for the Sean O’Mahony’s club, they came away with their first league victory of the season against Geraldines at home on the Point road.

A minute’s silence held for O’Mahony’s former underage player Sean Maguire, who passed away during the week, was impeccably respected by both sets of players and indeed spectators before any ball was thrown in.

The hosts used that emotion to good effect with a blistering opening quarter, going 3-2 to 0-1 up before the first half water break. Ben McLaughlin got the first goal after a sizzling solo run, quickly followed up by an opportunistic Thomas Rice rebound after Sean McEneaney parried a Stephen Kilcoyne effort.

Stephen Fisher was upended in the square to allow Kilcoyne to bury the resulting penalty for the hosts third before Conall Hoey found the net for the visitors to make it 3-5 to 1-2 at the turn. Following some early O'Mahonys pressure in the second half, Kilcoyne converted frees to stretch the Quaysiders lead out to 11 points.

The Haggardstown men soon started to take advantage of the breeze and kicked three frees of their own followed by a second goal all from the boot of the impressive Shane O’Hanlon.

However the O’Mahonys would not be denied on the day and hung on thanks to two fine efforts from Fisher as well as the McGeough Park side’s ill-discipline, which saw them finish with 13, Nicky Mackin and Josh Arrowsmith receiving their marching orders.

Ten points was the difference between St.Fechin’s and home side St Patrick’s at half time but in this game of two halves, both sides would come away with the share of the spoils thanks to a thrilling second half comeback from the Termonfeckin outfit.

The hosts were completely dominant in the opening half, Cathal Grogan and Paddy Keenan in fine scoring form down the centre of the Lordship attacks which saw Johnny Magee’s side quickly open a 1-6 to 0-1 lead.

Jason Woods found the net twice in the opening half but St Fechins were handed a lifeline when Ronan Holcroft dispatched a penalty before the half time whistle.

The scoreline read 2-10 to 1-3 at the turn and another Holcroft penalty at the start of the second half proved the catalyst for the Bealieu revival.

Substitute Ryan Walsh at inside forward landed point after point, all the while eating into the home side’s deficit along with place taker Joe Corrigan who landed some monster 45s. Despite a late Woods point, the visitors slotted over the last two points of the game to draw the contest.