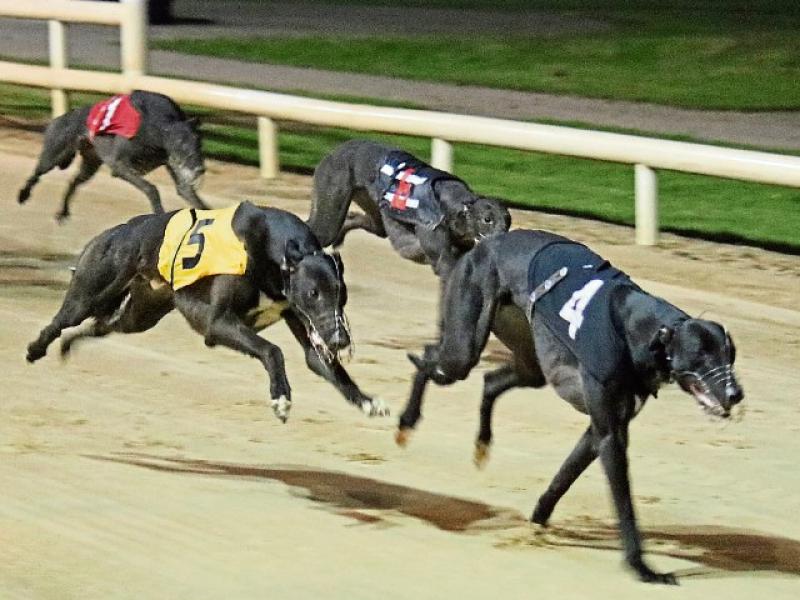 Peter Cronin has a very strong hand going into next Sunday night’s final of the Bar One Sprint Cup at Dundalk Stadium. The Co Kilkenny trainer has two going for him as he attempts to emulate his feat of 2014 when Crokers Champ triumphed for his Mooncoin kennel.

Crokers ran from six back then, scoring by two-and-a-half lengths from the Marie Gilbert-trained Walshes Hill having reached the decider unbeaten. Maybe it’s an omen:  the best-fancied of the Cromin runners, Ela Supremo, goes from the wide outside, running alongside his kennelmate, Maybe Aye.

While there’s no direct local interest in the €20,000-to-the-winner event, there’ll surely be a resounding cheer from regulars among the restricted crowd if Blue Corner makes it across the line in front.

Owned, trained and bred by Newry veteran Oliver Shields in partnership with his son, Thomas, Blue Corner has been nothing if not hugely consistent in qualifying for the final.  The tidily-built blue, by Farloe Rumble – who stands at Paul Matthews’ Newry kennel – and Otherdetails, posted 21.15 in a quarter-final win.

Although opposed by the long-odds favourite, Corback Prince (1/2 to win the race), and unfavourably drawn in one, he ran a fine race to take second in the opening semi-final behind the very impressive Maybe Aye, with the jolly back in third. Blue Corner will wear the white sheet in the decider, and that’s in his favour.

The favourite was turned over in the second semi-final as well. Three wins in the competition to date, breaking the 21-second barrier in each of them, Good Cody got a 1/2 quote, but although well enough placed, he couldn’t negotiate the bend as well as Ela Supreme and Drahan Jet, and after that was chasing one of the minor qualifying spots.

The Tipperary runner came in third, just over six lengths off the 21.00 winner, Ela Supreme, with Drahan Jet in the runner-up spot.

Whatever price is quoted about his two runners, trainer Cronin must be odds-on to send out the winner. Both had lots of ground between themselves and their nearest rivals last Saturday night with Ela Supreme the fastest of them on the clock.

Corbrack Prince’s run in the semis was completely out of character. If returning to the form, which had him recording a competition-fastest 20.88, he can play a part, notwithstanding a trap one draw. Good Cody is also on a retrieving mission, wearing the blue sheet.

Blue Corner’s dam, Otherdetails was a flier from the traps, and if her son can conjure up his swiftest exit he can get among the prizemoney for his popular connections.

Ela Supreme is arguably the best drawn, and if again showing speed to the opening corner, the Ballymac Best dog, owned in partnership by his trainer and compatriot, Willie Rigney, who is well known for his involvement in the dog food industry, can lead the whole way.

The horses also go ahead at Dowdallshill on Sunday afternoon, but whereas in previous years this meeting dovetailed with the greyhounds later on, this time, because of Covid restrictions, they are stand-alone fixtures, with re-entry required for the night offering.